MacD on Music: Rock the Boat 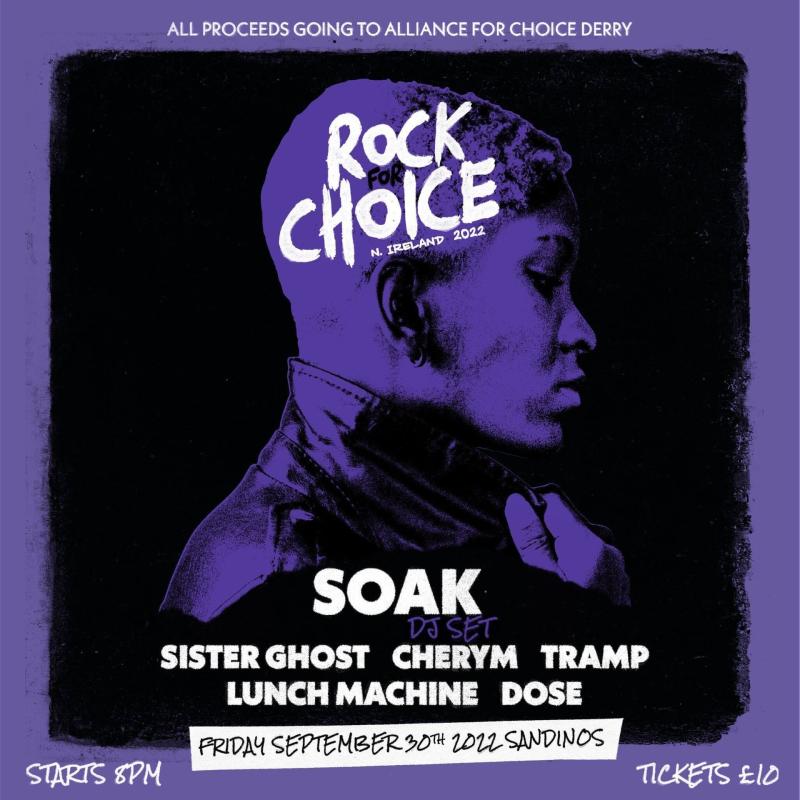 Anyone passing Sandino’s recently may have noticed a poster in the window for ‘Rock For Choice’.

The gig, taking place on the 30th September, is going to be headlined by Soak, and features support from Lunch Machine, Sister Ghost, Dose, Cherym and Tramp.

The show is a fundraiser for Alliance for Choice, the reproductive rights organisation, and follows the first Rock for Choice in 2019. This week I’m talking to Tramp, Lunch Machine and Cherym about their thoughts on the gig and what the cause means to them.

Lunch Machine describe themselves as “a bunch of scallywags from Donegal and who have been playing music together for about five years.”

They describe their sound as “a bit like post-punk or shoegaze, but with a sense of humour”.

We're playing Rock for Choice because we believe that abortion is a human right & that everyone should have equal access to essential healthcare.

It's awful that people are still struggling to access abortion services here despite it being legal for years now.

Are there any other acts your particularly looking forward to seeing?

To be honest, we can't wait to see all of them.

It's amazing to be asked to be part of this lineup of bands. If we had to pick one though, we can't wait to see Tramp.

We're almost ready to release our new song 'Pipedream Graveyard'. It's a banger.

It's in the final stages now, being mixed and mastered. We've been playing it live and perfecting it over the last few years and we're really excited to put it out into the world.

Cherym are a local three piece who’ve been making a splash both at home and abroad in recent years. Anyone who’s seen them live will know that they’re not a group to shy away from the issues, so it makes sense that they’d be involved with a cause such as this.

We need to start seeing a real change on how pregnant people are treated in this country.

Access to abortion services are crucial for women and people with uteri especially in the North West.

We need to stop treating it like such a taboo subject and get real. FREE SAFE LEGAL ABORTION ACCESS NOW FOR ALL.

Are there any other acts you’re particularly looking forward to seeing?

I think this is their first show and hearing new bands for the first time is always super exciting for us. Can’t wait to watch their set!

We support Fighting With Wire in Derry on the 29th of October in the Nerve Centre. Then we’re off on tour with Bob Vylan at the end of the year.

Also we’ve just started on something we have in the works, that we can’t talk about just yet….!!! But SOON

Tramp are a group that should familiar to long-time readers. This past year has seen the release of their debut single ‘Frankenstein’, as well as support slots with acts such as Cherym and Invaderband.

If there is ever a doubt in people's minds at how fighting for our reproductive rights is still a necessary fight, just look at what has happened to the US in the last year.

Even here on both sides of the border, after the Repeal the 8th and Decriminalise movements; our MLAs, Health Secretary & doctors are turning their backs on patients who desperately need fast and safe access to abortions.

People are still having to fly to England due to the lack of access here still!

Not only is this a shout to see action on behalf of the government since the decriminalisation in 2019, but a call for support for Alliance for Choice Derry.

The campaigning, workshops, education and help from this grassroots cause has been and is literally life-changing.

Are there any other acts you’re particularly looking forward to seeing?

Have you SEEN the lineup?! Poster full of powerhouses!

We can't wait to feel the energy raised in the building. Very excited to see Lunch Machine live, we can't help but love the Donegal roots.

We have a pretty packed October in the run up to Halloween with a mini tour happening across the water... our next single 'Snakes & Rabbits' is just on the horizon too so watch this space.

Rock for Choice takes place on 30th September in Sandino’s.

It can be found on Instagram@rockforchoice.ni