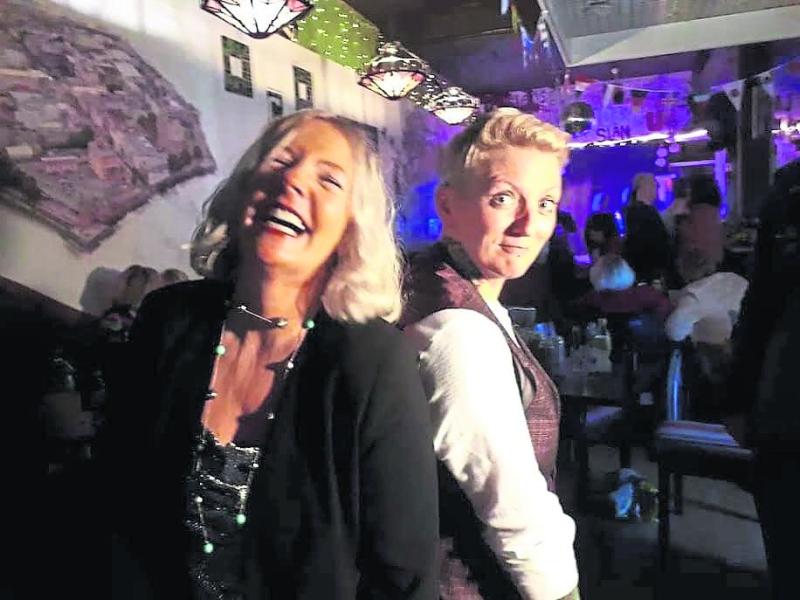 This year, there’s an incredible line-up for you to celebrate International Women's Day - on the bill there’s The Henry Girls,  Blackbird & Crow,  Reevah, Blood, Great White Lies  and Tara Gi with comperes for the evening  Madonna Kebab  and  Thran Leeann, with the night ening with some tunes from The Stray Kitten. All that for £5 in Sandino’s on Saturday, March 7.

But, before that, on Saturday next, February 22, in the Gasyard, Blood’s Noella Hutton will be launching her new album.

Noella doesn’t  need an introduction, but for those of you who have never been outside she has had some of the best adventures of any of Derry’s musicians.

“My first experiences of live music were of my sister, Jeanette, singing around the house,” she says, being inspired herself to moving to London to pursue her career, like many other musicians from Derry.

She was signed to music superpower Universal Records in the late 1990s, went to America, recorded her first album in the Record Plant in Sausalito, California, where Rumours by Fleetwood Mac was made (Rumours is mediocre at best and Fleetwood Mac are just as good…or bad) and took to the daily grind of constant gigging of being a working musician. Her follow-up album was made in Santa Monica and she came back to Derry in 2003.

She has consistently been writing and she promises a new album isn’t too far away. Really, really close actually. Solo album number three, is out on the 22nd.

Have ye totally abandoned Jeanette or what’s the craic?

“I hate her phahahaha, naw, we still do the odd Blood gig. There's just nowhere interested in doing original gigs. BennIgans is probably the only place that does. Wherever my album takes me Blood will go too. Jeanette is my best friend, my big sister, my greatest influence in every way, and we have the same dark sense of humour. phahahaha very important!”

Following your Facebook page, is there anyone you haven’t met?

“To me, these people were powerful from a distance. Get them up close and sit with them they're all just ordinary and winging it like the rest of us. Some of the loveliest folk I met where Sarah McLaughlin and Boy George. There's a few more and a few that were very disappointing. I'll leave the details for another time.”

Tell us about recording the album…

“I've known Justin Black for 15 yearss. He's been one of the only people besides our Jeanette that really cared and pushed me out of my depression. He has been annoying me for years to do an album for me. I can safely say he's one of the most talented, selfless... annoying... and extremely loyal friends I've ever had.  We have much to do.”

This would be the time and place to mention that there won’t be a physical version of the album. If you were born before Nirvana that means there won’t be any vinyl or CDs, in fact Noella has said she hates Cds… me too. These are the times we live in and we might as well get used to it. I’m all for Noella’s approach.

Are ye nervous putting it out by yourself?

“I wouldn't want it any other way. Record companies are saturated with artists. They're just big banks who make most of the money so I would rather tread slowly and just enjoy the whole process and journey with the folk I trust to help me.” It’s a different music world from the '90s, how’d ye adapt?

“It's a great time to be a singer-songwriter recording our own songs. The internet has opened up immense possibilities. It’s very hard work. But having the right tools and in the hands of the best people anything is possible!”.

Fascinating secret fact revealed…. Jeanette and Noella Hutton sang in choirs and competed in feiseanna and have been named as an inspiration by most musicians I chat to.

Another fascinating fact is that Noella is George Hutton’s big cousin and he has said “Noella and Jeanette are my cousins, but they’ve been a big inspiration of mine growing up. Two fearless performers with two beautiful raw and passionate voices, writing songs from their very core, I absolutely love them.”

Keep up to date here,  www.facebook.com/thefirstnoella and get the album “Love & Liars”  released on Saturday from  Noella’s  band page through Bandcamp.