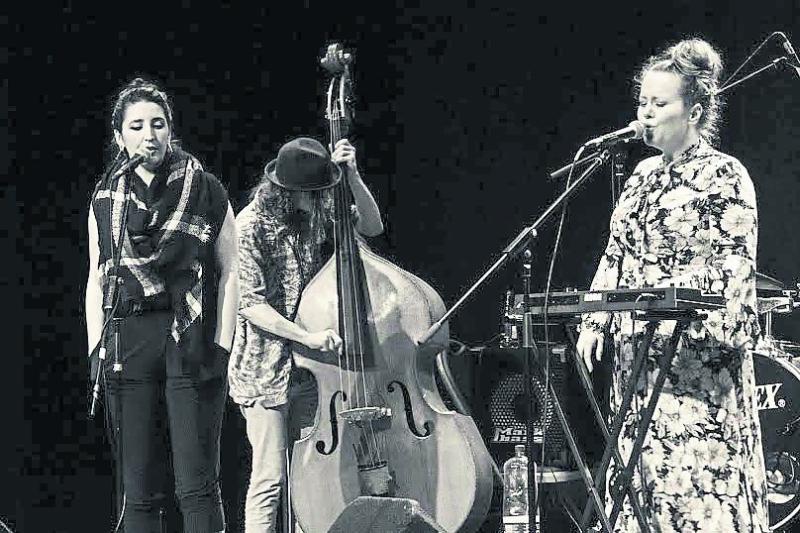 PRIDE is run by volunteers and depends on good people like yourselves to keep the festival running. This year there’s an incredible line up for you to celebrate International Women's Day. On the bill there’s The Henry Girls, Blackbird and Crow, Reevah, Blood, Great White Lies and Tara Gi with comperes for the evening, Madonna Kebab and Thran Leeann. The night will end with some tunes from The Stray Kitten.

Tara Gi is a singer/songwriter from Donegal who honed her craft in New York playing with a range of musicians, including Damien Dempsey, fronting her own bands and perfecting her song writing skills.

Since returning to Ireland, Tara has been living and working in Donegal and can be heard playing in Falcarragh.

Mixing the indie rock sound with folk and traditional Irish music, she has created something truly unique, dealing with issues such as inequality between class structures and between the genders as well as more controversial subjects such as child abuse and sometimes the lighter side of life.

Trust me, it isn’t all doom and gloom, her melodic grooves and punchy rhythm back up her ethereal voice. You can find her on iTunes and YouTube or buy one of her CDs when you see her

She’s gigged all over the country and played alongside acts such as Lisa Canny, Wyvern Lingo and Duke Special.

It takes something special to juggle a job and music; motherhood must be the harder…

“It’s definitely all about finding the right balance, I had Rosa when I was at university, so I became quite used to dividing my time between work and home life. It’s similar to being a musician, I find that music is a release for me, it’s almost just part of my daily life and if I didn’t have it, it would be very strange - it’s who I am now, a form of expression.

“Having Rosa and Noah has definitely altered my life and me as a person, being a mother has been of huge influence on my music and the way that I approach writing.”

You took off quite quick, is that more daunting than being around for years?

“Did I? Ha-ha... Maybe from other people’s perspective it might seem that way, but I feel like I’m only getting started. I suppose I’ve just been busy. My first gig as Reevah was exactly two years ago, it was the beginning of me taking music a bit more serious than I had before. In those two years I have played as much as possible and recorded in three different studios along with some brilliant producers and musicians throughout the North, I was also a part of the Scratch My Progress Programme run by the Oh Yeah Centre in Belfast which was an amazing learning opportunity.

“I like to think I’ve been quite proactive so far, but it’s only the beginning of music for me.”

Keep up with her on facebook.com/reevahmusic and twitter.com/reevahofficial and instagram.com/reevahofficial.
I’ve spoken to Great White Lies before, they’re a band that mixes a bit of everything and sounds like no one else. They’re another example of sticking to your guns and going it alone.

Siobhan Shiels once told me: “Great White Lies would be lucky to make more than €300 for a gig, that's five people rehearsing, travelling and spending up six hours in and around the venue.

“That culminates in approximately €40 each after travel costs for six hours and work. Why is this so? It's not sustainable.

Whereas a wedding band would get paid approx. €200 each for the same hours. Without people creating there'd be no music for the cover bands to play yet we don't appreciate it.” That’s music now.

You've been an active participant in movements here…

“Seeing the abortion rights campaigns pass in Northern Ireland and in the Republic has been amazing. It's demonstrated to me what people power can achieve. The movement to accept asylum seekers in Ireland has been a focus for me especially since Carndonagh has welcomed five new Syrian families.

“I'm eager to set up welcoming measures in my community with Inishowen's first Middle Eastern Festival which we hosted in Moville mid last year with Global Kitchen which brought people form Direct provision currently living in Sligo to share their food with us and we fed approximately 400 people.”

Is it more difficult for women to get taken seriously in the independent scene?

“I've always found it difficult to get noticed, could it be because I'm woman with pesky female opinions that the male-dominated music hierarchy deem less than intriguing? Or could it be that my music is jazz-inspired genre-bending music without guitars?

“ The tides are changing. I'd like to give up on vying for attention in an oversaturated market where the only folk people want to elevate is more of the same old schitck where there's a ready audience generating money for the industry.

“I'm making music I like and sharing it with people with whom it resonates.

“Luckily, there's a few stations and DJs around the country who appreciate what I do and I've a sound bunch of folks who make great efforts to attend my gigs. I'm making music for myself, them and anyone else who finds me along the way.”
You can find them on Facebook, iTunes and greatwhiteliesmusic.com