Derry man Conor O’Kane will return to his home town next month as part of the new male vocal harmony group, The Four Harps, to perform at the The Playhouse. 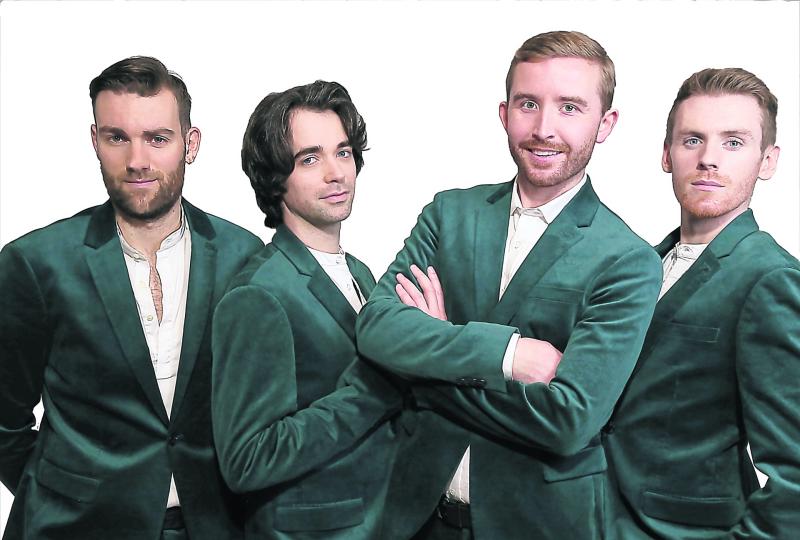 The Four Harps who will appear in The Playhouse on 14 March next.

Derry man Conor O’Kane will return to his home town next month as part of the new male vocal harmony group, The Four Harps, to perform at the The Playhouse.

The group fuse Celtic classics with modern pop and folk with their programmeinspired by traditional Irish music that has been mixed and merged with more modern music from Irish artists such as U2, Van Morrison and Snow Patrol.

The programme also includes work from other artists including Sam Smith, Ed Sheeran and even songs from “The Greatest Showman,” all given an Irish twist. Musical arrangements are by Toby Nelms, creative staging by Ian Good.

Twenty-seven-year-old Conor is a graduate of Mountview Academy of Theatre Arts and has worked extensively as an actor-musician.

Coming from a family of seisiún musicians and singers, he is particularly delighted to share the trad-pop fusion that The Four Harps have created.
As well as Conor, the group also consists of 30-year-old Ryan Lynch, from Strabane, 24-year old Kevin Fagan from Dublin and 27-year old Fergal O’Hanlon from Galway.

Having trained at Northumbria University and Associated Studios London, group creator Ryan has appeared in several productions including new musicals such as The Clockmaker’s Daughter.

Most recently he toured the world with a major cruise line playing leading roles in popular musicals including “Tony” in “West Side Story.”

Fiercely proud of his roots, he has always loved Irish music and in 2017 developed a solo show singing some of his favourite songs.
The response was so positive that he decided the way forward was to further develop the idea and form a four-piece male harmony group.

With a busy work schedule it wasn’t until earlier this year that he was able to bring together the right line-up.

The boys have already performed at the Kinky Kaberet, The Phoenix Arts Club, Archer Street, Soho, The Concorde Club, Southhampton, The Above the Stag Theatre and Picadilly’s, Crazy Coqs, Live At Zedel.

Kevin has worked as a performer since childhood as a cabaret host and singer and actor.

He is proud of his Celtic background and thrilled to be a string of The Four Harps.

Fergal is the newest member of the team. He trained in Ireland and has appeared in various film and stage productions, including work in the USA.
It is now full steam ahead with recording sessions and a potential Britishand Irish tour.

Ryan is confident The Four Harps and their programme of music, which includes “The Irish Rover,” “Danny Boy,” “You Raise Me Up” and “With or Without You,” will have a wide appeal.

He said it was their aim to introduce the beauty of Celtic music and voices to the world intend to tour their shows internationally.