Jamie McGonigle does it again as Derry City defeat Drogheda!

Candystripes a point off first with a game in hand 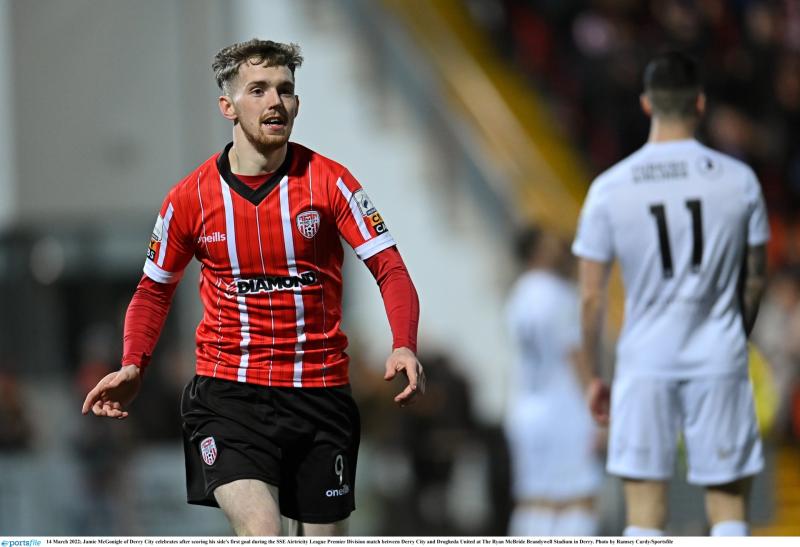 Jamie McGonigle was amongst the goals again for Derry City.

The only downside for Ruaidhri Higgins tonight was that Michael Duffy’s long-awaited return from injury was cut short, the midfielder lasting less than 10 minutes before being carried off after a strong challenge from Keith Cowan after coming on as a second half substitute.

Other than that, it was a professional outing for the Candystripes who did their job well.

Drogheda were cut open with Derry’s first attack as Shane McEleney’s pass forward found its way to Jamie McGonigle, who went through on goal and fired the ball beyond Sam Long to make it 1-0 with barely four minutes on the clock.

Drogheda struggled to get a foothold in the game after that and they were reliant on their goalkeeper for making a string of good saves, particularly to deny Danny Lafferty who met a pass from McGonigle and drilled the ball goalwards only for Long to stop it brilliantly.

Drogheda were hanging on barely as half time approached and they should have been 2-0 down when Shane McEleney’s superb 40-yard pass forward found the run of McGonigle in behind but the striker went for a first-time volley and the ball flashed just wide of goal with Long beaten.

Derry had to wait until just past the hour mark to double their lead, and again it was a brilliant piece of instinctive finishing from McGonigle. Another long ball, this time from Cameron Dummigan, put the striker through on goal, and McGonigle side-stepped Long before rolling the ball into the net under significant pressure from Keith Cowan.