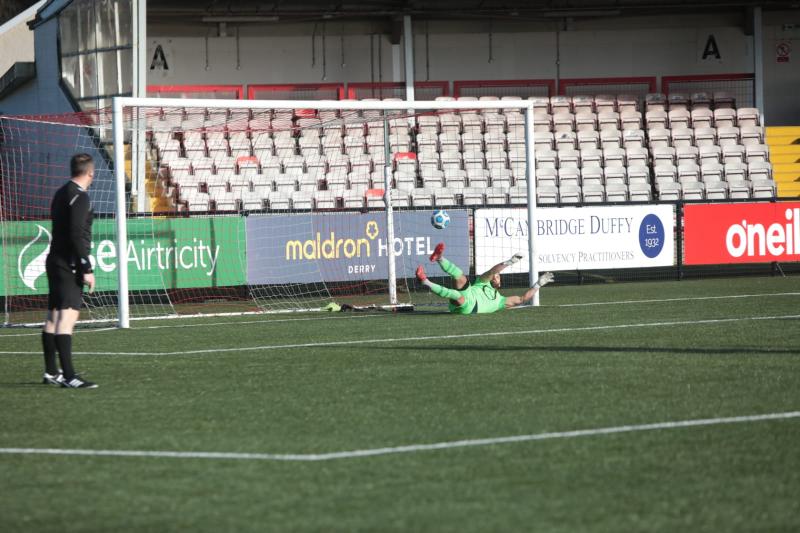 Institute fell to defeat in a five-goal thriller on a day of huge controversy at the Brandywell.

Brian Donaghey’s side gave as good as they got against their second placed opponents, but they feel they were denied a goal with the score at 0-0.

The controversy came just 12 minutes in when the home side were awarded a penalty when Loughgall goalkeeper Berraat Turker fouled Mark McFadden to gift the home side a penalty. In the absence of regular penalty taker Benny McLaughlin, Gareth Brown stepped up and although Turker guessed the right way, the ball looked to have bounced over the line before spinning back into play, right in the eye line of referee Diarmuid Harrigan who indicated no goal, much to ‘Stute’s disbelief.

To make matters worse, Loughgall then took the lead against the run of play thanks to a real howler from goalkeeper John Connolly, who somehow let a tame effort from Caolan McAleer slip through his hands and into the net on 26 minutes.

‘Stute got their chance for redemption just 8 minutes into the second half when they won a second penalty. Again there was no doubt as Gareth Brown got in behind Carson who clearly fouled the ‘Stute man, and for the second time referee Harrigan pointed to the spot. This time there was no controversy and Ian Parkhill sent Turker the wrong way to make it 1-1.

Unfortunately for ‘Stute, they were level for only five minutes as an unimpressive Loughgall took the lead again. Shaun Leppard and Conor Quigley both collided as they went for the same ball and that sent Andrew Hoey away down the right. It was five on three in Loughgall’s favour and the winger simply looked up and picked out Maciulaitis who fired the ball into the roof of the net.

‘Stute responded well and equalised again when McFadden chipped a great ball into the path of Caolan McLaughlin whose first exceptional first touch set preceded an even better finish as he curled the ball past Turker and into the bottom corner for 2-2.

The winner came just eight minutes from time. There was simply no luck for ‘Stute who did their best to clear from a corner, but when Alan Teggart got a second chance at a shot from the edge of the box, he found the net, shooting past a stationary Connolly, who failed to see the ball through the crowd as the ball flew past him.