End of an era beckons for Institute 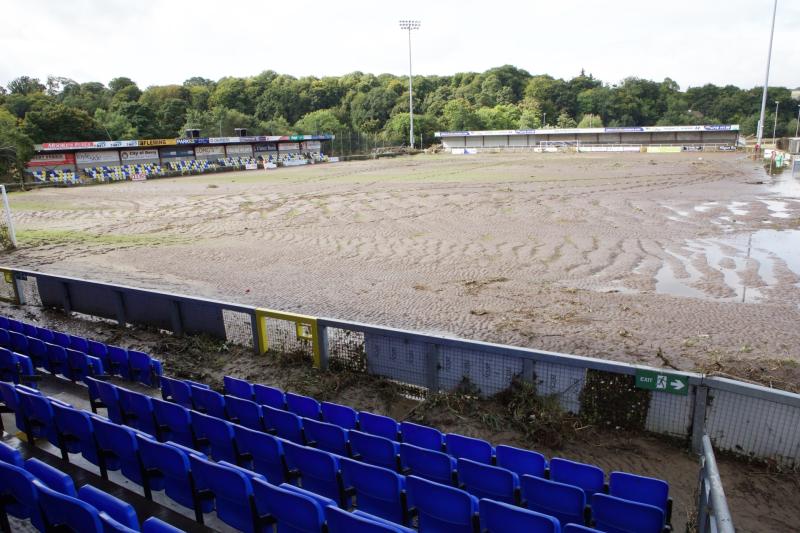 The Riverside Stadium was destroyed by floods in 2017. Pic by Tom Heaney, nwpresspics

A sad chapter in Institute’s history looks set to end with the club applying for permission to demolish the long-abandoned Riverside Stadium.

The ground, still seen as ‘Stute’s home, was destroyed in the floods of August 2017, after which the club found itself playing at Wilton Park before eventually moving to the Brandywell Stadium. With no hope of rebuilding the stadium due to the discovery of Japanese knotweed, ‘Stute have had t look elsewhere for potential bases, with the club always planning to move back to the Waterside area of the city.

This wee the club has applied for permission to demolish the Riverside Stadium and undertake remedial works at the Drumahoe ground in order to return the land to greenfield use. The application has now been submitted to Derry City & Strabane District Council.

‘Stute boss Brian Donaghey has fond memories of the Riverside Stadium, and admits it will be a sad day when it is demolished.

“You always miss your home,” he admitted. “The Riverside has been Institute’s home for as long as I can remember. You look at the figures behind the scenes like Billy Kee and Paul Kee. You could list them off, all people who have helped the club move forward. You have good, good football people worked there and I have good memories of the stadium. I always thought it was the best I ever seen the pitch and the best I’ve been the facilities there the week before the flooding.

“I remember the game very, very well; Robbie Hume scored against Armagh and if you told me that day if I would never be in the Riverside again, it would have been a massive, massive shock to me.

It will be sad seeing the stand taken down, but hopefully it is relocated to a really good area. You do have fond memories, but let’s look forward now to getting a new base and a new identity for the club.”

Meanwhile, Donaghey’s attentions now turn to the challenge of overcoming second-placed Loughgall at home this Saturday.

‘Stute have lost their last two games against Dergview and HW Welders, but with several new players now bedding into the club, the manager believes his team are in much better shape overall.

“We’re a different animal now,” he said. “I look at the squad and I think were in a much, much better place. I’ll be judged on that and that’s fine, but I’ll put myself out there and I’ll take the blame for it if it goes wrong.

“We’re looking forward to the challenge. I really rate Loughgall to be honest. I think Dean has done a really good job. I think it’s his fifth year, but building teams in the Championship doesn’t take six months or a year; it take a board to try and trust someone to build something. He has built a fantastic squad and I think they are one of the better footballing teams in the league. They are one of the teams who really impressed me when they came to the Brandywell; I just hope they don’t impress me this week.”

The biggest problem facing ‘Stute this season has been consistency, both in performances and in results, and with such a young squad at his disposal, Donaghey knows that significant change won’t take place overnight.

“I’ve been talking about it since I came in,” he continued. “You get that with a young team, consistency levels go up and down so when we’re good we’re good and when we’re poor we’re very poor to be honest. We’ve been competitive in nearly every game.

“The Welders game was disappointing for me because I thought it was a missed opportunity. They had four shots the whole game; one was a deflected shot and the other came directly from a corer virtually, so it’s something we have to stop.

“Bar that, we had a lot of play and the last 35 minutes we spent mostly in their half. There was a lot of nice, neat and tidy play but no cutting edge. That’s something we’ve worked on now in the last two weeks. It was actually good to get a week off to try and reinforce a lot of stuff in our forward play and our forward thinking.”

Having had two weeks off due to their elimination from the Irish Cup, Donaghey has looked around his squad and is more optimistic than he has been at any point this season.

“We have definitely improved the group, quality-wise and experience-wise,” he said. “There’s a few new lads, a few have come in, a few have gone out and it just refreshes the place. We’re looking forward to it now. I just feel we have a lot more beef about our bones up in the top area of the pitch where the magic happens. We now have five, six or seven options whereas we were probably relying on one or two beforehand so things are going well.”