TODAY'S THE DAY! Making 'Hea' while the sun shines! 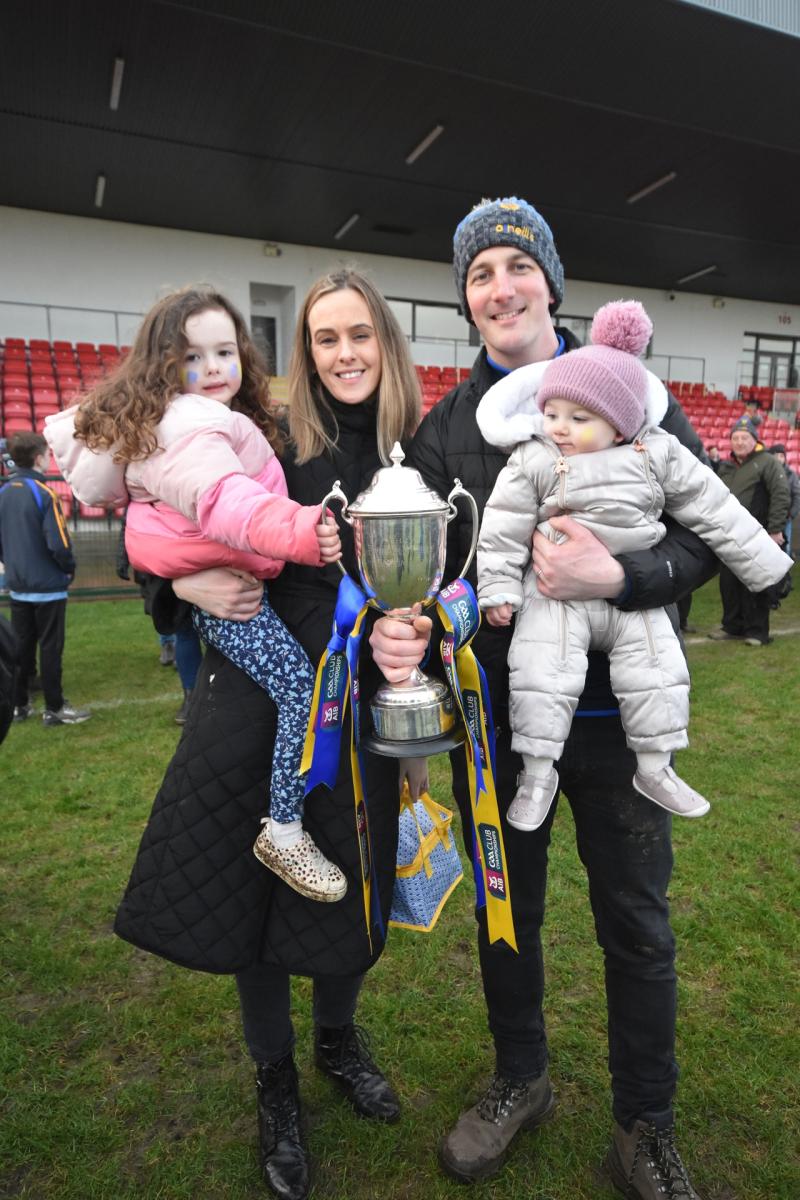 Steelstown chairman Paul O'Hea with his wife Natasha and their daughters Róise and Neala after the Ulster final win over Moortown. Pic by Mary K Burke.

If there’s a role to play at a GAA club, Paul O’Hea has probably done it at Steelstown.

The former Óg’s player, manager, serial committee member and now club chairman epitomises everything that it is good about the GAA. About putting the shoulder to the wheel to help the cause.

This week has been spent making sure that the team and their coaches have everything they need ahead of today’s All-Ireland final clash with Trim. No stone is left unturned and every detail is accounted for.

It’s a lot of work, but O’Hea wouldn’t change a thing. Having played in the 2010 Derry championship final loss to Castledawson and managed the Óg’s during the 2016 final defeat to the same opponents, that infamous day in Ballymaguigan in November when Steelstown finally claimed their first county championship with a 0-9 to 0-8 victory against Greenlough felt like the ultimate glory. Surrounded by fellow former players, little did they know what was to come.

“Taking in the whole journey, especially from that day in Ballymaguigan onwards it has just been amazing. It’s just been full of so much hope and excitement and it’s been so easy to get behind the lads,” said O’Hea. “For myself and for all of the former players, we were just hoping to see us get over the line in Derry and then once we got over that first Ulster game you’re starting to think maybe we can go on and win this.

“For some of the boys who even finished up playing just last year it would be easy to feel sorry for themselves but they’re just as happy as anyone. They can see what it means to all of us – boys that might be finished up ten years ago, coaches – just the whole community and the amount of joy it has brought. Everyone’s in the same boat and it’s just really special.”

The chairman continued: “The support has been fantastic. Some of the messages we have received have been unreal. We’ve had Facebook messages from ones that used to play underage with us but have moved away, and we’ve had emails from clubs in Derry and further afield just wishing us good luck and saying they’re backing us all the way.

“Even in the town you have people stopping and asking about it. We know that we’re representing not just the county, but Derry city. We want to win it for everyone up here and show that teams from Derry city can compete at the top level.”

While O’Hea enjoyed a playing career full of highlights most can only dream of, a club championship medal is one that always evaded his grasp. Sometimes it might have felt like it was never going to arrive, but the Steelstown chairman believes that once they lifted the lid by securing the Bateson, Sheridan & Lee Cup, the shackles came off.

“I suppose a difference with this team is that it’s been freshened up a bit. There’s a nice blend of experience and the younger boys and they just get on with it. Winning that first Derry championship was a release, it was new ground finally broken,” he explained. “The boys had been told all year they were a good team but you still have to actually go on and win it. When they did, they just took it up another the level.

“The confidence in their play has been brilliant. They’ve just gone for it every game and gave everything they have. You look at the Donaghmoyne game and how we responded in the second half and the same against Butlersbridge. And then against Moortown we had to massively grind it out.

“The All-Ireland semi-final on Saturday, I honestly haven’t witnessed many games like that. Obviously I am emotionally invested but when you looked at how we could have faded against the fancied team in the second half but we didn’t feel sorry for ourselves – it was just a privilege to watch the fighting spirit,” said the former Derry player. “Na Gaeil closed it to a point and then there’s a big shoulder, a few big blocks, turnover, subs coming on and the noise just lifted. From the sideline it was heart-wrenching and exhilarating at the same time.

“Hugh (McGrath) has been saying all year about the spirit of this team and their identity. They’re good footballers but they can also dig it out when they need to. It really is the spirit of Brian Óg McKeever – that resilience but also the flair to attack. It’s been incredible.”

O’Hea knows what it takes to do it on the big stage at Croke Park. He was part of the 2002 Derry minor team that defeated Meath in the All-Ireland final, and he fully believes that every panel member for the Óg’s will have their mind set on what is ahead.

“I have no doubt that they’ll be fully focused on the task at hand. Naturally there will be a lot of hype this week because this is where everyone dreams of playing – an All-Ireland final at Croke Park. You have to say it out loud to get your head around the fact that it’s actually happening,” he admitted. “But I know the team are going to be as well prepared as they possibly can be. It’s a short turnaround but it’s the same for both teams. We’ll be watching the clips, making a plan, and they will keep each other grounded too. The one thing about this team is there will always be boys there ready to bring you back down to earth and focus on the job at hand.

“You can see on the pitch in every game how well prepared they are. They know all the scenarios they could face before they get out there so even when it’s happening at lightening speed in a game they are calm on the ball and they make the right decisions – and that’s been the winning of the tight games.

“Hugh (McGrath) has done an amazing job as manager, and I know that in that role your phone never stops. Him and the whole coaching team have been immense at the planning and preparation and they’ve done brilliantly in getting that across to the players in every game,” he concluded.