ONE DAY TO GO! Devine ready with his army of support!

Excitement building ahead of All-Ireland clash 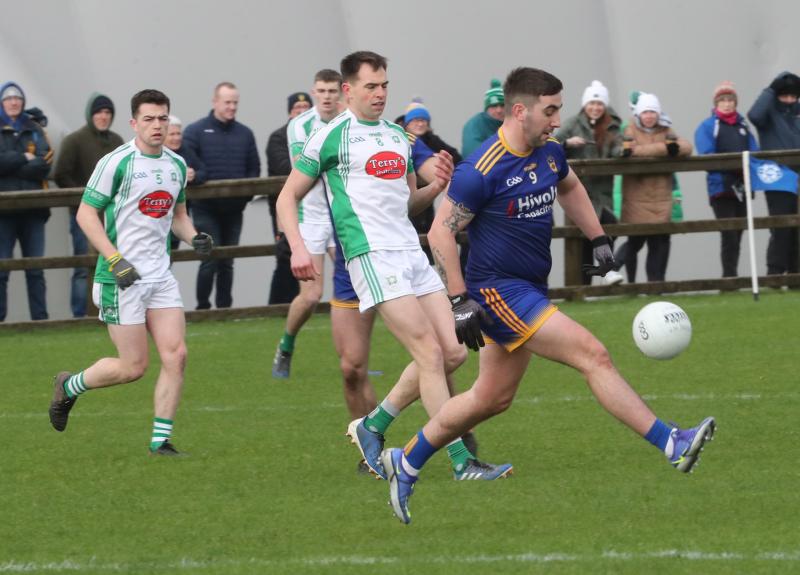 Ryan Devine has fond memories of making the trip to Croke Park as a spectator, but this weekend – for the first time – he will set off on the journey in preparation for stepping on the hallowed turf.

While only 32, Devine is one of the oldest members on the Steelstown panel. For the Irish Army private solider, a lot has changed.

Throughout this historic season, there has always been one common sight after a game – Devine’s son Coby-Jack going straight to his father to celebrate when the final whistle goes. It’s a big change from his early days in the blue and gold jersey but, along with his daughter Evie and partner Catherine, there have been some special memories created. And he is hoping there’s more to come on Sunday as a reward for all the sacrifices made.

“It’s frightening to think about. I can remember as a young fella’ going down to watch Derry play in Croke Park with my family and now to think that my son and family are going to watch me on that pitch is something special,” admitted the midfielder. “I think I can speak for everyone in the team when I say that our partners, girlfriends, and families are the reason that we do it – this is for them.

“For us to do what we are doing this season has meant a lot of sacrifices that they’ve had to make. Aye, you have training and matches but that’s far from it - there’s a lot in between and this is as much about them as it is about us.”

Devine has seen a lot of great players come and go with the club, but he insisted that this current crop are the best he has been involved with and he pointed to the unshakeable bond at the core of the panel as the reason for their success to date.

“I’ve played on some unbelievable teams with this club and I still have great friends that have retired from playing now, but I genuinely believe this is the best team I have been a part of,” Devine stated. “We do everything together and everything revolves around the team – not just in terms of training and games, but socialising outside of that as well.

“The whole team really clicks and I get on just as well with the younger boys as I do with the ones I’ve grown up playing alongside like Mickey (McKinney), Neil (Forester) and Marty (Dunne).

“I suppose it’s a lot to do with the management as well and how they have worked with us. I could head out for a coffee tomorrow morning with one of the younger lads and that wouldn’t be strange at all, it’s just the way we are as a team.”

In many ways it only feels like yesterday that an elated Steelstown team and crowd were celebrating that first Derry championship title. In reality, three months have passed and an Ulster campaign that threw up every challenge in the book. For Devine, the mentality of not getting too far ahead of themselves has served the Óg’s well.

“I think at the start of every year for the last ten years we’ve just been going into it saying that we wanted that Derry championship. Once we got over the line in November we just focused on that first Ulster game against Cloughaneely and thought we’ll give it a rattle and see how we go. Maybe we got the rub of the green a bit at the end with them hitting the crossbar, but it has just snowballed from that point,” he explained. “We’ve always just taken each game as it has come and not looked too far ahead of ourselves. Even when we won Derry and Ulster, of course we celebrated it but at the same time I think even now it hasn’t really sunk in. After every game we’ve just got back to the grindstone and focused on the next challenge ahead and it’s worked well for us so far.”

You can’t turn out the performances that Steelstown have this year without a serious drive from within. As Devine explained, every training session has brought a fierce competitiveness and the strength in depth of the squad has meant there isn’t a single player who can rest on their laurels.

“We’ve been pushing it hard all year but I would say before the Moortown game we really stepped it up another level. Aye we’re maybe going into a few games in a row with the same starting team, but we all know that there’s a handful of boys that can come in and do exactly the same job, so there’s no room for any slacking.

“If we’re playing an A vs B game in training, it’s nearly tougher than some of the actual matches we’re going into. We’ve had broken noses and ribs in Celtic Park these last few weeks, it’s just been hell for leather and I’m coming home from training with a sore body feeling like I’ve played a match. But that’s what drives us on.”

The past weekend’s win over the competition favourites Na Gaeil was the latest in a long line of the Óg’s proving the doubters wrong. But Devine said that it all comes down to Sunday – and there is only one objective.

“Saturday was a serious high for us. We went in as underdogs and I think we brought an ability and an intensity that Na Gaeil hadn’t faced all year. On the way home on the bus there was obviously no drinking or anything, we just enjoyed the moment but we got our recovery session done on Sunday, enjoyed a bit of time with our families and then it was straight into training on Monday night and all eyes were on Trim – everything that has happened before is forgotten about.

“There’s no point going to Croke Park if you’re not walking up those steps at the end of it. Our main objective has always been the same with every game and we’ll leave no stone unturned. The only thing that matters now is getting up them steps and lifting the All-Ireland trophy come the end of sixty minutes,” he concluded.