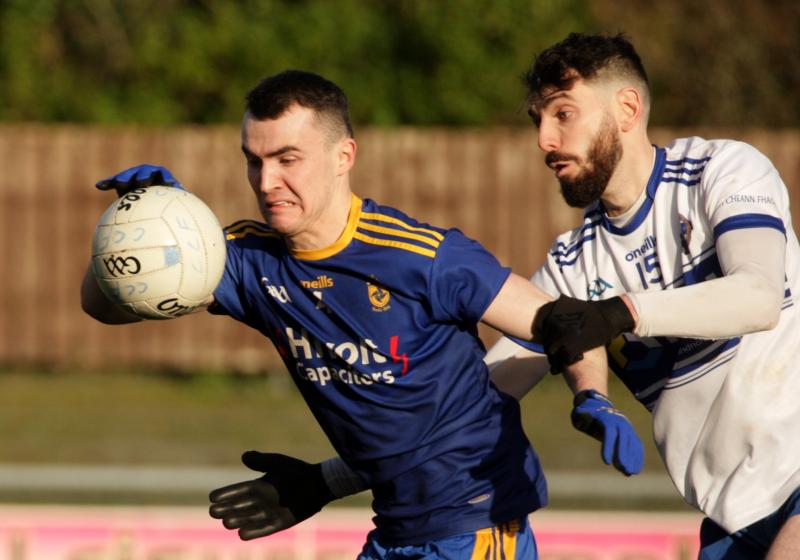 No player was more relieved that Steelstown held on to reach the All-Ireland final than Diarmuid Baker, whose red card against Na Gaeil last week could well have spelt the end of the road for Brian Óg’s.

Already on a harsh yellow from the first half, Diarmuid couldn’t believe it when referee John Gilmartin produced a second yellow, followed by the red just minutes into the second half of last week’s game against the Kerry champions.

With Steelstown just a point up and Na Gaeil building momentum, the dismissal came at the worst possible moment. That the red card was harsh and undeserved remains the feeling across the board, but that would have been little consolation to a player who has arguably been the heartbeat of the club in these last three months especially.

Man of the Match displays in both the Derry and Ulster finals were no surprise for a player who has proved himself a natural both leader – consistent, level-headed and capable of big moments when his team needs something. Baker epitomises the heart, the desire and quality of this entire Brian Óg’s squad, so you can imagine how he was feeling when he had to watch the rest of the game from the sidelines, praying that his red card wouldn’t cost his team mates.

“I had all sorts of mixed emotions,” he admitted. “You’re high on adrenaline and then you feel angry about it but then I felt sad about it. I hate sitting on the bench, I hate watching the games. It’s grand when you’re playing, you don’t actually think about anything because you’re out there, but when you’re on the bench you’re completely conflicted. I can’t watch them; I spend half the time with my head in my hands.

“Being sent off and going from thinking you have lost the game for everyone to seeing the boys perform was unbelievable; Ben McCarron, Ryan Devine, Donncha Gilmore and Kevin Lindsay were all super and they just pulled it out of the bag and saved my bacon. It was class to get over the line and see the boys show that grit and determination.”

The cornerback is now looking ahead – to Croke Park, to Trim, to a shot at All-Ireland glory, and all week long a tweet of his from six years ago has done the rounds proving that in sport, dreams can come true. The tweet, reading: What I’d give to play in a club final in Croke Park on Paddy’s Day’, has now come full circle for Diarmuid, and while it may not exactly be March 17, he will realise his long-held ambition regardless.

“We were sitting for breakfast on Sunday,” he laughed. “It was me and Ben and a few others and I was saying ‘I remember watching a club final a couple of years ago and I remember tweeting something like that’. They said to go and find the tweet and they would tweet it out again. I didn’t want to because it has been going about since but we’re living the dream now.

“It’s massive. You dream of playing at Croke Park from no age. You watch Kerry and Dublin play there and you think that you would love to get the chance to play there. On the other hand, you have to put that out of the window until after the game and try and just focus and play the match as well as enjoying the occasion along with everyone around you.”

From runners up in Derry last year to Derry, Ulster and possible All-Ireland champions a year later is an extraordinary feat, and Diarmuid insists that the coaching staff at the club deserve all the credit.

“McGrath has made a huge impact,” he said. “He has just come in and given everyone a bit of belief in themselves. Every game we go into this year we have been thinking ‘We’re not going to get beat’.

“We have been training and because of the intensity we have been at, even if we fall behind in a game, we are thinking that we are going to pull this out of the bag somehow and going to win.

“I feel that Hugh, Paul and Raymond (Tracy) have given us that bit more self-belief. Before that Gibby and Paul O’Hea were brilliant, but a fresh face and the introduction of boys like Donncha, Cahair and Oran McMenamin and even some of the younger boys who aren’t playing at the minute, but are there training like demons, is class.”

The depth of that Steelstown squad has also been paramount to the success so far and whoever plays their part at Croke Park on Sunday, one thing is certain – Trim will not get it at all their own way.

“When we’re training, having to mark Cahair, Eoghan Bradley, and all the forwards is a nightmare,” he continued. “Cahair has given me the run around every time I have marked him in training this year, so having boys like that, and you know every week they are going to produce and perform. You know in training they are going to perform so you just feel sorry for the person marking them really.

“It’s been such an emotional year.

“I keep hearing this statement ‘The floodgates have opened’. This time last year we were all out running the roads just hoping this would be our year. We never would have thought it would come to this. You see people like Brian McKeever and the joy it brings him. He was the first one over giving me a hug on the pitch then you go into the gym and you see the two murals, it’s class really.”