Brian Ogs just one win away from an All-Ireland final 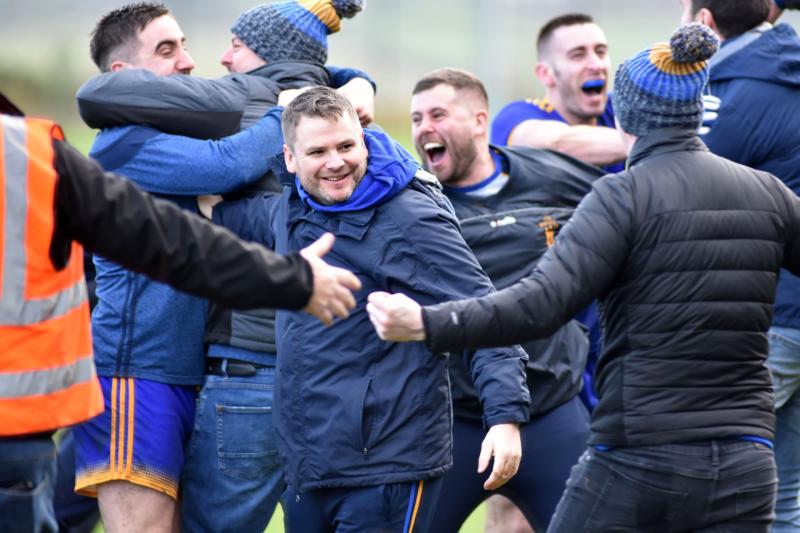 Hugh McGrath and Steelstown Brian Ogs are just one more victory away from an All-Ireland final. Pic by Mary K Burke.

Steelstown Brian Ogs must overcome their biggest challenge yet if they are to reach their first ever All-Ireland Intermediate final.

That is the view of manager Hugh McGrath who is preparing his Derry and Ulster Intermediate champions to face Kerry champions Na Gaeil in Mayo today.

“At Steelstown, any step forward we always celebrate it there and then,” McGrath stated. “I’ve never been with a group that gets their feet on the ground as quickly as this one does and asks ‘What’s next? What can we have a go at next?’

“For the past couple of weeks we’ve just had our heads down in training getting ready for the task that’s ahead of us. Let’s face it, there’s no bigger task than playing the Kerry champions in the next round. It’s something we’re looking forward to and we’re ready for.”

The journey to Derry and Ulster success has provided a variety of different tests along the way, but no matter the circumstance, McGrath and his players have always found a way.

“The beauty of the squad we have is that we are quite flexible and if we come up against a different style of play, we can react fairly well,” he acknowledged.  “We have personnel who can change games there in different ways. It’s cliched to say it’s a squad game nowadays but it really is. You have to be able to change things around to see what’s going to work for you against different opposition.”

“The Na Gaeil challenge is probably the biggest test we’ll face all year. They are littered with good footballers, but I like to think that we are a challenge they haven’t met this year as well. We like to move the ball forward at pace. We like to have a go at things, we don’t park the bus, we want to go out and play football and that’s what they do as well so I think it sets itself up for an entertaining game.”

Much has been made of Steelstown’s opponents Na Gaeil, who won the All-Ireland title just two years ago. The Kerry champions will be a daunting opponent, but there is no fear in the Steelstown camp.

“I’m originally a Down man and we have never feared Kerry, so my group will be exactly the same,” McGrath laughed. “Every challenge at this level is different. We wen through Ulster and we never played any of these teams before so you don’t now what you’re playing. Literally your entire focus has to be on yourself and getting your own team right and getting your own players right and that’s what we’ve done. There are big names in their side and they will need looked at, but we know if we play anywhere close to the capacity that we can play at, we’ll not be far away. That’s been the focus in the last few weeks, that we get the best out of ourselves, we give a really good account of ourselves and if we do both of those things, we won’t be far away come the final whistle.”

A large contingent of Steelstown fans are expected in Mayo today, and McGrath is hopeful that this remarkable Steelstown Brian Ogs story can add yet anither thrilling chapter.

“Once the players go over the white line, you’ve got to trust them they follow what you’re asking,” he concluded. “Things will happen in the game on Saturday that are out of our control. Na Gaeil will have their purple patch and how we react to that will determine the result of the game. We’re in a good head space, we’ve been through various different scenarios in the games that we’ve played so far, we’ve come through a tough road to get here so I think that we’re resilient enough that whatever is thrown at us, we’ll be able to react in a positive manner. If that works and gets us over the line, then happy days.”