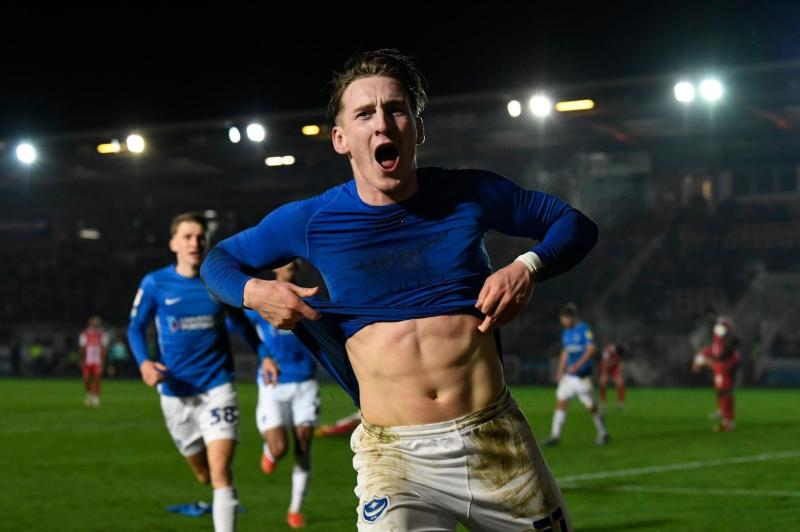 Ronan Curtis celebrates the goal against Exeter recently which made him Portsmouth’s top scorer in the 21st century.

Ronan Curtis is hoping that his goal-scoring exploits with Portsmouth can catch the attentions of Stephen Kenny and earn him a recall to the Republic of Ireland squad.

The former Derry City star was in the headlines recently having become Portsmouth’s top scorer in the 21st century, overtaking club legend Yakubu in the process. Curtis came off the bench to stun Exeter in the EFL Trophy, with two late, late goals to win the game for his team.

Trailing 2-1 and heading out of the competition, Curtis headed home Michael Jacobs’ free-kick on 89 minutes. Then, in the third minute of time added on, he pounced to drive a first-time shot through a crowded goal line to not only win the game, but to surpass Yakubu’s record of 44 goals. It was a defining moment in Curtis’ career, achieving the feat in 133 games since joining the club from Derry City back in 2018.

“I knew about the record a couple of weeks beforehand,” he admitted. “It was a huge opportunity for me to break it. Yakubu was a great talent, and there are some big, big names on that list like Peter Crough and Jermaine Defoe; there are loads and loads of top, top players who have been around for years and who played in the Prem, so to beat it is hard to describe. It’s a huge, huge honour, not just for me but for my family and my little girl and myself. It’s a huge honour.”

The goals against Exeter were a relief in another sense as it ended a two-month, 11-game drought for Curtis, who has managed double figures in each of his seasons with Pompey. Manager Danny Cowley fully expects Curtis to keep that record up in the remaining months of this season.

“All top, top players go through the highs and lows of football and I knew if I just kept going and working hard on the training ground it would come, and luckily it did,” Curtis said.

“I’m am attacking player and if I’m not scoring goals I’m setting up goals. Since I’ve been here I’ve hit double figures every year so of course I’m aiming for that again and every year. Every new season I look to add to the tally so I’m looking forward to doing it again.”

In the bigger picture, Curtis is determined to win his place back in the Republic of Ireland squad this year, having missed out under Stephen Kenny in recent games. Club mate Gavin Bazunu has made a name for himself on the international stage in recent months and Curtis Scoring goals and breaking records cannot do his chances any harm at all.

“I have broken the record now and I’m doing well for my club and if Stephen can’t see that, I don’t know what else I’ve got to do,” he stated. “I’ll just keep my head down and keep working hard and keep doing what I can do at club level and we’ll see what happens.

“Stephen has given a lot of young players a chance and it’s very good. You’ll not really see a manager at national team level give opportunities like that, and he’s done well in the last few games. Gavin is a top, top player but even the senior pros help the young lads as well in there so it is really good.”