McCullagh shines as Draperstown start the year in style 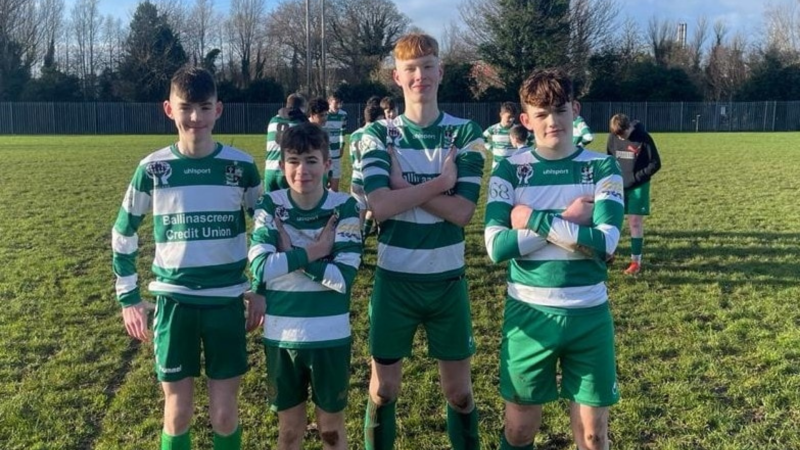 The goalscorers from the 2007s win over Limavady.

The 2007s started the new year is style with a convincing win over Limavady on Saturday morning. In the first half DC came out strong dominating the game from the off. DCs first goal came from Matthew McCullagh 10 minutes into the game, beating the defence and completing a fine curl into the bottom right hand corner.

The second goal came from Keenan Conway who struck from the 40 yard line for a screamer lobbing the keeper. Limavady had a few attempts stopped by a strong Patrick Heaney and also hit the crossbar.

The third came from a very talented assist from Gavin McIvor to be well finished by Shea Murray coming off the keeper and into the goal. DC’s very strong defence held off Limavady to lead 3-0 at the break.

The second half saw Limavady start slightly stronger. Their attack was defended well by Ronan O’Kane but DC broke, Shea Murray crossed to Jake Quinn who had a strong finish heading the ball into the back of the net.

Limavady managed to pull 2 back although Dara Hickson pulled off a few great saves to keep DC ahead. The last goal came from Shea Murray who dummied the keeper for an excellent well placed finish.

Great team performance from all the lads as they ran out 5-2 winners. MOTM - Matthew McCullagh.

Another solid performance from the under 2008s lads on Saturday morning in a very cold and blustery Derry City. They started a but shaky but settled very quickly and played some nice football. They made good use of the long kick outs and went in at half time 3 up.

The second half started as the first finished but they were playing into a strong wind. The lads kept the ball down and played the ball well.

Maiden city broke the defence a few times using the breeze but some good one on one saves kept them scoreless. GOALS: PJ x 2, Odhran, Daultagh, Emmett.

The lads are improving every week through good hard work at training. Thanks to parents for transport and support

The 2009s made their return following the Christmas break against Tristar on a chilly Saturday morning at Meadowbank. From kick off Tristar showed that they were very comfortable on the ball and dominated possession.

The DC defence of Patrick, Ben, Dara and Conall did well to limit the chances that Tristar had while the lads showed some promise on the counter, with Eoin and Pól showing that they could be a threat.

Tristar took the lead on 16 minutes, a great strike from outside the box hit the inside of the post and went in, leaving Michael helpless in goals.

Their second followed just 2 minutes later, coming from the second phase of a corner as the ball was crossed into the back post for a free header.

Much of the rest of the half was spent in the DC half as Tristar continued their onslaught but the lads managed to hold on and see out the half at 2-0 down.

DC came out in the second half with a change in shape, personnel and attitude. From the off the front three of Eoin, Eoghan and John were hassling defenders and giving the Tristar keeper no time on the ball.

DC had a half chance to grab one back as John forced a save from the keeper. Ethan looked on hand to finish the rebound but it just didn't fall for him and Tristar were able to clear.

The lads did manage to get one back as a Patrick throw found John down the line. John then drove to the byline before cutting the ball back for Pól to fire home.

DC huffed and puffed to try and get the equalizer, a half chance for Eoghan was the standout opportunity as Tristar grew back into the game as the lads tired and saw out the win.

Tristar's impressive first half got them a deserved win but the DC lads' second half warranted something from the game.

Overall it was a good first game back for the boys as they look to push on in the second half of the season. Thanks as always to all those who came up to support the boys.

The DCFC Football Development Centre (FDC) returns from the Christmas break on Sunday morning. All boys and girls will train at their usual times.

Our senior Diamonds return to training on Sunday 16th December. If you are interested in joining the DC Diamonds, please contact us on social media or via draperstowncelticfc@outlook.com.

Ladies / girls of all abilities are more than welcome to come along and join us.