Sean O'Kane - a special teacher and a special friend 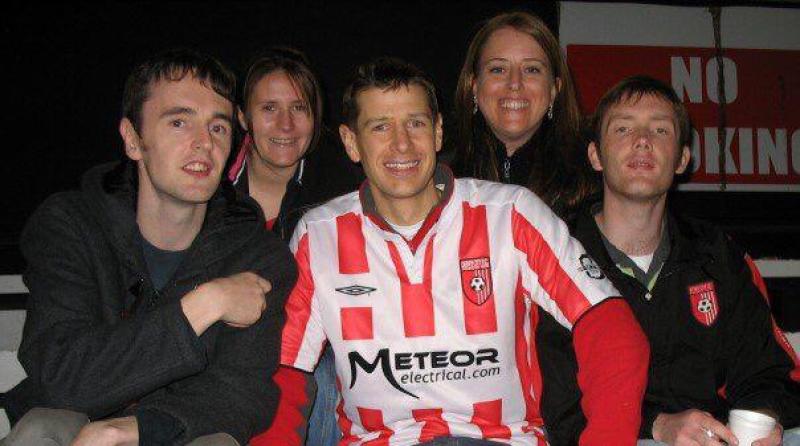 Tributes have been paid to Sean O’Kane (far right) since his death on Friday.

Over the course of 27 years, I don’t think I’ve argued with anyone as much as I did with Sean O’Kane.

I mean, how can anyone seriously say to me that Jackie McNamara was a better footballer than Ryan Giggs?

It was 1995 and we were in the canteen of St. Columb’s College on the Buncrana Road, and he was adamant. One thing about Sean was that he was always passionate and he always stuck to his guns, even if the truth was staring him right in the face. ‘I’m telling you Gary, he’s a far better player. Giggs is over-rated. And I’ll tell you another thing – any team that signs John Collins will win the Premier League.’

He actually said these words to me!

Even now, when I’m trying to swallow the lump in my throat writing about my friend, I have to laugh and shake my head at that statement. John Collins went on to join Everton and he never, ever came near the Premier League title.

We were both in our mid-teens, and the only thing that really mattered at that stage was football. This was the time of Oasis and Blur, where the internet didn’t exist, and your mood depended on how your team did at the weekend.

Sean was Celtic through and through, just as I was Manchester United, and we rarely, if ever, agreed on things on the pitch.

I think it was the fact that we agreed on so many things off the pitch which ensured that we became friends. We were massive WWE fans, and if we weren’t lost in conversations about what Stone Cold Steve Austin did to Vince McMahon one week, we were laughing about what The Rock said the next week. We were proper wrestling geeks, a trait that connected us for 20 years after we left St. Columb’s, and if ever I needed to vent about anything wrestling-wise, Sean was the one to talk to.

We also spent days, weeks and months playing football after school or during the summer holidays when his family moved to Fernabbey; he, his brother Fergal, and sometimes his sisters Ciara and Eireann (I don’t think Colleen was born yet), would meet us all at the Youth Club in Lenamore and we would wile away the hours. At the weekend, it became more serious and we would go to the gravel pitches at the Sports Complex, before walking home together, barging and complaining and laughing the whole time.

Sean was always an older head on younger shoulders. He consoled and talked me through my undying love for a teacher at St. Columb’s in those early years. Needless to say I am mortified looking back, but when I do look through my fingers at that cringeworthy period of my life, I remember Sean there, telling me she was a married woman and for me to wise up, in his own unique way of course.

Oh and his coat! For some reason, his parents bought him this big warm winter coat, emblazoned with the Celtic crest. There’s nothing wrong with that, but for some utterly bizarre reason, on this coat designed for Baltic weather, the arms were detachable with a zip. I mean, why? That became the bane of Sean’s existence as we used to take off the arms and hide them and he would have to walk around school looking for them. But he loved that coat!

Sean and I were also among the few in the school who, when we turned 18 – on the exact same day – refused to drink alcohol. I was never that interested and he was the same, but that lasted about as long as a Celtic title challenge these days as our other class mates – Colm McCloskey, Neal Sharkey, Paul McColgan, Gerard Grey and Piaras O’ Donaghalie got their hands on him. Before you knew it, Sean was living the life and living the hangovers, and that innocent 18-year-old teetotaller was lost to history.

Life took us in different direction for a few years after that but it was Derry City FC which brought us back into the same circles. I was a junior reporter at the Derry News, and Stephen Kenny was taking the team places after years of struggle. Like any true Derry bandwagoner, Sean decided to come along and see what the fuss was about, bringing his good friend Damien Tracey along with him. The fact that his sister Ciara was playing for Derry City Ladies and dating Gareth McGlynn may have had something to do with it also.

For a number of years, we would always meet at the games, and revel in a rich period for the Candystripes. It got to the stage that we went in on a bet together – Derry City to win 3-0 every game. I remember one such game, City were 2-0 up and won a penalty. Mark Farren stepped up to hit it and he missed! Sean was not amused, but luckily Liam Kearney headed one in late on and we were delighted, taking back everything we called Farrenso!

I clicked so well with Sean, but I could never be as outspoken as him. He wasn’t shy in holding back his opinion and I always marvelled at that, simply because I couldn’t do it. I’m sure his colleagues and students at St. Joseph’s know what I’m talking about; he was just so interesting, and he never failed to make me laugh with his witty observations and devastating putdowns.

The fact that both Damien and Sean are gone now weighs heavily on me. I was driving on Saturday evening and it struck me how I wouldn’t hear Sean’s voice again, or read his texts when he would be calling Scott Brown a fraud or Neil Lennon a joke, or venting about whoever had annoyed him that particular week.

Sean was able to accompany me to the Brandywell twice last year, for games against Shamrock Rovers and Drogheda United, and I’m so glad that happened. I know he enjoyed those games, and I enjoyed his company, and we laughed about the stupid things as we always did.

I can’t claim to be Sean’s best friend, and I don’t know if he would describe me as a friend or an acquaintance, but the fact that I could always text him about stupid stuff was something I always appreciated.

I was on the periphery of his life in the sense that I didn’t go out with him or wasn’t party to his struggles as he fought, fought and fought his battles, but I have always considered him a friend, and I am so damn sad that he has gone.

I’m in this job nearly 17 years and still I would be asking him to correct my headlines and if this or that sentence was grammatically correct. He was a self-proclaimed ‘Grammar grump’, as am I, which brings up another memory. We were in Wexford for the 2008 League Cup final, and in the bar for the celebrations afterwards, another friend of mines looked on agog, as Sean and I complained about people’s grammar. It was ridiculous, but that’s what we were like together.

I know Sean was so well thought of at St. Joseph’s, at Tristar, and far beyond both in local circles. We were born on the exact same day – March 25, 1980 – and maybe that’s the reason I always felt so strongly linked to him. But we were linked by much more than our date of birth, and for that I am appreciative and for that I’ll remember him forever.

Others can tell better stories and others will have been much closer to Sean than I was, and I can only imagine what they’re feeling today. Those students who have paid tribute to him on Facebook had a wonderful teacher – not just someone who knew the difference between a comma and an apostrophe, but who was willing to talk to them, to tell them stories, to give them advice, to connect with them on a human level. That kind of teacher is not so easy to find, believe me.

Those students are the lucky ones.

His best friends, who spent so many hours with him in good times and bad, are the lucky ones,

His family, who were with him every step of the way, who made him laugh, who made him strong, who cared and consoled and supported him in those hard, hard days – they are the lucky ones.

To have known him at all, makes me a lucky one.

It is so hard to say goodbye to you Sean, so I won’t. Instead I’ll say thank you, so much, for arguing with me all those years and for making me laugh so often.

And for the record – it took him 25 years, but he did eventually admit that he was wrong about Jackie McNamara. Better late than never.

The page is blurry now as I write these final lines with tears in my eyes, but I’m pretty sure Sean is reading over this shaking his head at any spelling or grammar mistakes I must surely have made. I would expect nothing less from one of the best people I ever knew.

Thank you for everything Sean.

Until we meet again.