'Apart from the last six weeks of my last season, it was quite an outstanding period I had at Derry.' 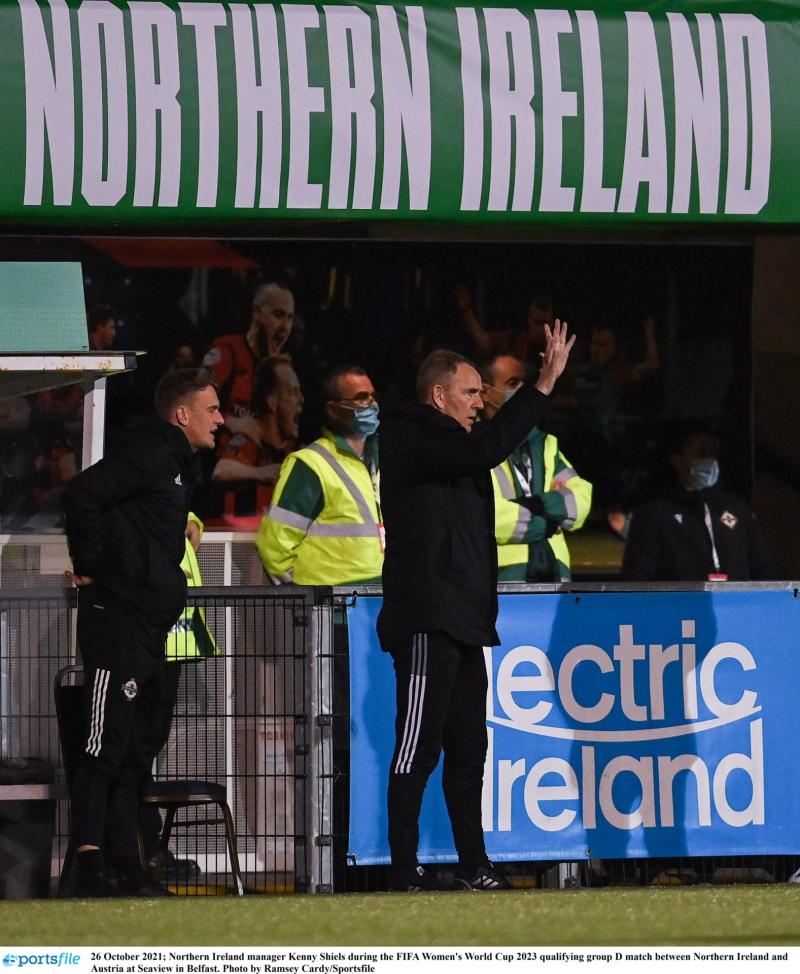 Kenny Shiels has found a new lease of life as Northern Ireland Ladies manager, but his time at Derry City still holds a special place in is heart.

You would be hard pushed to find a man as passionate about football as Shiels, who turns 66 this year and is showing no signs of slowing down. He travels the country at the request of countless clubs and individuals who are eager for the Magherafelt man to pass on his wisdom to those taking their first steps on the game.

Last month, in the midst of storm warnings across Northern Ireland, he arrived at St. Mary’s College in Derry to take a session with a host of young girls’ teams from across the Northwest, as part of the Foyle Games Development Centre, run by familiar faces Kevin Doherty and Gerry Colhoun. Then he was straight on to the Coleraine Showgrounds where he was a special guest for the game against Linfield. He is constantly in demand; even taking Steelstown Brian Ogs youngsters for a coaching session in the city not long before that. Kenny loves sport, and loves being a part of it.

His achievements at international level with Northern Ireland are incredible so far. As well as qualifying for Euro 2022 this year, NI are in the midst of a World Cup Qualifying Campaign, and are in with a real chance of success; they scored 20 goals in their last two games against North Macedonia to make it four wins from six games so far to give themselves a real opportunity of competing at the highest level. These are heights the national team has never, ever reached before. But they are achievable now, because of Kenny.

“In the women’s game it is so heartening for me to see people who are giving everything for the team,” he reflects. “The team comes first for the girls and it’s easy for me to manage, really it is.

“It has helped me from a human perspective because I feel so much improved as a person and as a coach. I can see that in how I deliver now. Obviously I have loads of experience in coaching and you learn things along the way. I also feel that you learn from your mistakes and from what you do good as well, and sometimes people overlook that. Sometimes you work at something and it comes off and everybody thinks ‘aw he’s a great coach’, but you were working as hard before that in other ways.

“When you take over a club team, you can change the personnel and the playing staff, but you can’t do that at international level. These are the same players; they won two World Cup matches in 11 years, and we have now won 4 World Cp matches in two months. Those statistics are unreal. In our last campaign and this isn’t self-praise, but we’ve won 10 of our 12 games, we drew one against Austria and we lost one against England. That’s a fantastic lift for the girls who now feel they are getting good.” 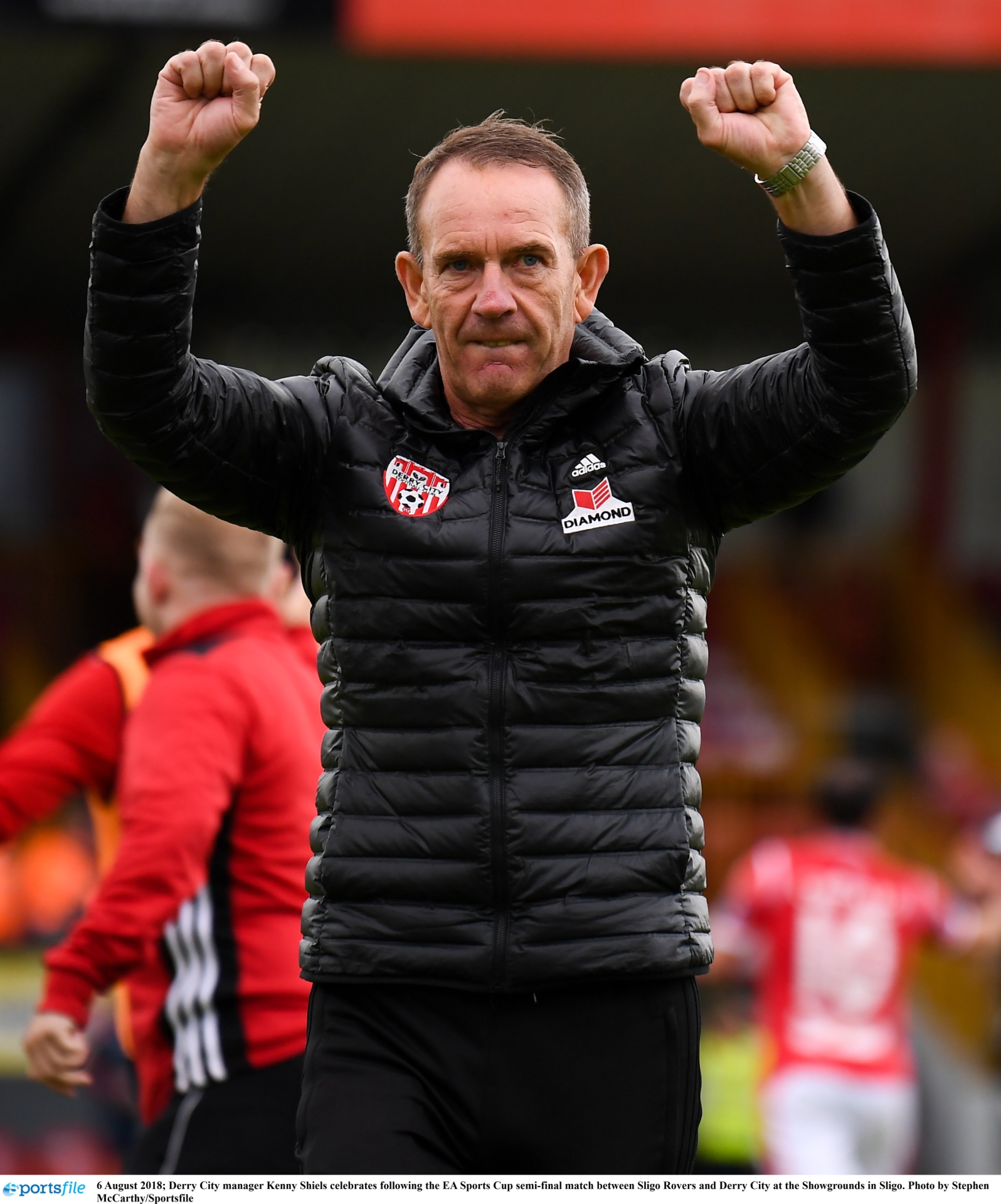 Kenny remains the only Derry City manager to win a trophy in the past 9 seasons, but the League Cup success of 2018 is not his only achievement at the Brandywell. It may have ended badly, with an 8th place finish in the same year, but Shiels took the Candystripes into Europe twice, and helped the club steer through utmost tragedy following the death of Ryan McBride in 2017.

“I look at the success we had in Derry, and maybe it’s not as much as people think, but apart from the last six weeks of my last season, it was quite an outstanding period I had at Derry,” he says.

“It was difficult. Losing Ryan was a big wrench. People forget that when we lost Ryan it was after our eighth successive win. We won eight league games in a row; the four at the end of the previous season and the four at the beginning of the next season. It was eight games in a row and Ryan scored in his last game and that was the direction we were moving, with Ryan.

“It took quite a few games to get a result after that, and then we did get a result. It really was a difficult period and it still is difficult. The Ryan McBride Foundation is an essential part of the country now because it remembers Ryan and sows what he did for the club itself and shows what a great captain he was. He was a leader of men who was quiet by nature, but loud on the pitch. The contrasting individual that he was, you could see him change immediately when he crossed the line to participate. I have great memories with him, but equally I really enjoyed the people of Derry and the support that we had.”

Kenny retains a great fondness for the club, particularly Chairman Philip O’Doherty, who gave him space to grow his team over three years.

“The Chairman was outstanding; one of the best Chairman that I worked for, Philip O’Doherty,” he insists. “He’s the only Chairman who said to me ‘I won’t be interfering, I’ll just be following the progress’. He never came across as ‘I know everything about football’. He was a person who knew he could leave it in my hands and he gave me great confidence to say ‘Get on with it and go and do it;’, and that was paramount throughout the three seasons that I was here.

“I had young players coming through from the youth team, and I went and did some work with them so that they were developing all the time and getting better and being around the first team. If you look at the players that we did produce from that youth system, it was fantastic.

“The last two months are what we were judged on unfortunately but I’m really pleased, because Ruaidhri Higgins is a personal friend and a family friend as well and I’m delighted to see him doing so well. I know he has got the personality and the people skills to do really well in football, whether it’s at Derry or whether it’s even higher. I’m sure that Ruaidhri can climb that ladder and have people supporting him.” 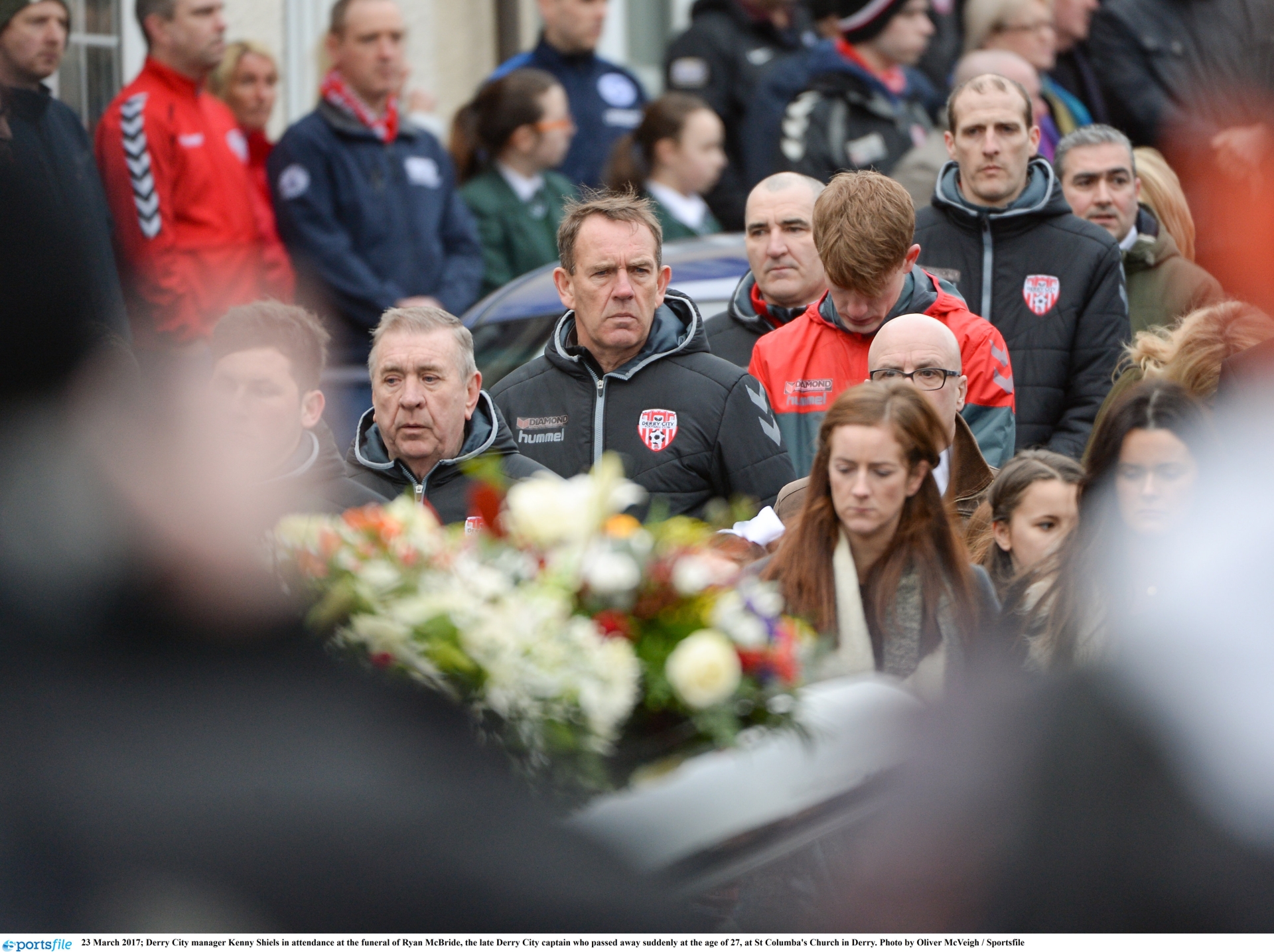 2022 promises to be another busy year for Kenny Shiels, but as he turns 66, his passion for the game shows no signs of diminishing. His love for the game remains as strong as it ever has.

“It’s my life and it has always has been,” he states. “I have been in it since I was born. My father was very passionate about football. He had his own team down in Maghera growing up, which was fantastic for me. I had a hernia when I was two and had to go into hospital for an operation and my mother always told me that I wouldn’t let them take the ball away. It must come from within, it must just be a thing you do and want to do. I love watching football as well, especially children and seeing them enjoying it. It’s great to see it, it’s absolutely brilliant.”