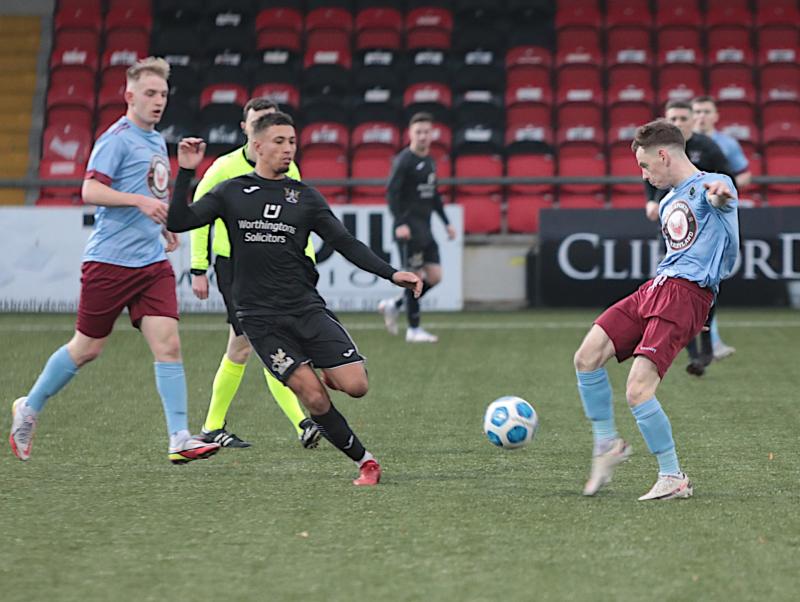 Institute held league leaders Newry to a draw at the Brandywell.

Institute picked up a brilliant point against league leaders Newry on a dramatic day at the Ryan McBride Brandywell Stadium.

Brian Donaghey’s team have been hit hard with Covid-19 this week, and had a number of players missing heading into the game, but those that did play did their manager and club proud with a battling and disciplined performance.

Newry’s pressure was constant from the off with John Connolly having to save a free kick from Daniel Hughes, before Mark Kelly flashed a ball right across the face of goal where Stephen Moan was inches from turning it into the net. John McGovern then sent a brilliant effort narrowly over with Connolly scrambling on 12 minutes as the league leaders looked to turn their early dominance into an early goal.

‘Stute were discipline and hard-working, and deserved to be level at half time, but their efforts almost came to naught when a poor kick out by Connolly gave Newry a late chance. Daniel Hughes brought the ball under his control and cleverly lobbed the ball in behind the ‘Stute defence for Kelly, but the striker’s volley was straight at Connolly who was able to palm the ball to safety.

The game took a fascinating turn on 63 minutes when Newry were reduced to 10 men. Jack Bradley was blocked off as he made his way towards goal and in the aftermath, referee Harrigan produced a second yellow for Stephen Moan.

The official was in the spotlight again just moments later when he awarded Newry a controversial penalty, penalizing Joel Gorman who, in clearing the ball from his area connected with Noel Healy who crashed to the ground. ‘Stute’s protests were in vain, but goalkeeper Connolly came to his team’s rescue with a brilliant save to deny Daniel Hughes, pushing the ball wide for a corner.

The drama did not end there however, as from the corner, John McGovern swept the ball over Connolly only for Patrick McLaughlin to head the ball off the line, and ‘Stute somehow survived.

The game was on  knife-edge in the final ten minutes, with Newry pushing hard for the win, while ‘Stute continued to work hard in the hope that something would fall their way. That something very never arrived on 86 minutes when Benny McLaughlin dispossessed Donnelly wide on the left. Substitute Montel Atoje was completely free in the middle but McLaughlin went for glory with an ambitious chip from 35 yards instead, and the ball sailed over Maguire’s crossbar.