Weekend game against Newry in doubt 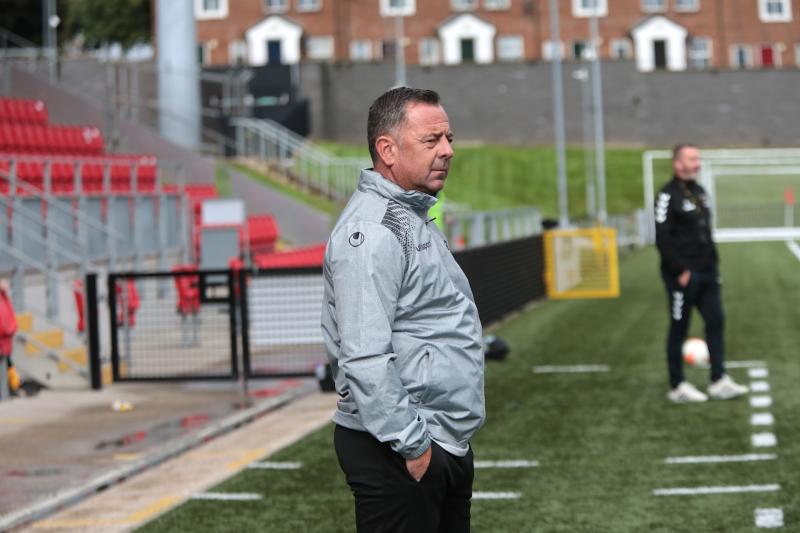 Institute boss Brian Donaghey is facing a Covid-19 crisis ahead of the weekend game against league leaders Newry.

Institute may be unable to field a team for their Lough 41 Championship game against league leaders Newry at the Brandywell on Saturday due to a rising influx of positive Civid-19 cases at the club.

Manager Brian Donaghey has had a trying few days, with a number of players pulling out due to testing positive, and is not willing to field a reserve team against the runaway leaders at the top of the Championship table.

‘Stute defeated Queen’s 1-0 on Monday past thanks to a goal from Jamie Dunne, but the victory was achieved with the squad missing four players, four of which were absent due to Covid.

Now, with two other players testing positive since, Donaghey is down six players for the Newry game, but expects even more to drop out.

“We were definitely down to the bare bones on Monday,” he admitted. “Coming up to Boxing Day, my phone never stooped in the morning with people getting conformation of PCR tests, or going for tests, or being close contacts and having to self-isolate.

“It was a testing 24 hours, but we just galvanised each other on the bus on the way up, and explained how important it was to be safe. All the players took lateral flows before they got on the bus. As a club we’re trying to follow the right protocol and guidelines and we did that, and I think we got a wee bit of luck because we got the result we wanted going up the road.

“It could have been easy to try and get the game called off like some other clubs did, but sometimes you’re better dealing with it and getting on with it and thankfully we came out the right end of the result.”

The win gives ‘Stute some breathing space at the foot of the table, with Dunne’s strike putting 10 points between themselves and Queen’s. There is still plenty of work to do to get out of relegation trouble this season.

“It was a massive three points,” Donaghey agreed. “I don’t think we played particularly well in the first half but after we got our goal it settled us a wee bit. I wasn’t happy at half time so I tweaked the formation and personnel a bit and we definitely looked better organised in the second half. Our defence was top drawer and stepped up to the test.

“Queens were definitely decent; I was impressed by them in the first half actually; we looked heavy-legged and jaded for some reason, and I couldn’t understand why, but we went 4-4-2 and looked a lot more solid and a lot more compact.”

As precious as that win was, there are bigger issues at play here for Donaghey and ‘Stute, with player welfare paramount in the middle of a pandemic. Saturday’s game against Newry could well be called off due to a personnel crisis at the club.

“We’ve had another two phone calls this morning already,” Donaghey said. “We’re just going to go through the Chairman and the league and we’ll see where it takes us and what kind of advice they can offer on how we go forward from here.

“We finished the game with four 17-year-olds on Monday, and I don’t think there’s anybody else in the country who would have done that. We’ve come out with a positive result, but when you have, for me, the champions elect coming to the Brandywell on Saturday, I wouldn’t like to be going in under par, and especially not missing five or six players.

“This is probably the worst I’ve experienced of it. Right now, we have signed four new players and have international clearance on two, but I need to add six or seven bodies. I don’t think too many people have delved into the reserves the way we did on Monday. We are a very, very young squad at the best of times, but fair play to the boys who came in and stepped up to the plate.”