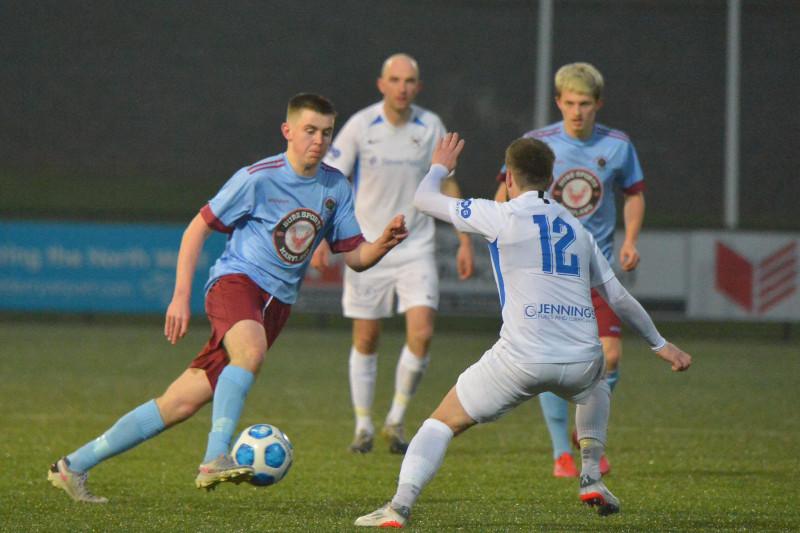 Ballinamallard had to come from behind to beat a spirited Institute at the Ryan McBride Brandywell Stadium.

‘Stute got off to the perfect start as they stunned Ballinamallard by scoring within two minutes, Joel Bradley Walsh curling a free kick brilliantly over the wall and past goalkeeper Rory Brown from 20 yards.

With Jamie Dunne full of energy, and Liam Walsh working hard up front, ‘Stute were not just holding their lead, but they were chasing a second, and their endeavour earned them a corner midway through the half which almost brought them that second.

Dunne’s corner went all the way to the back post where Bradley Walsh headed the ball back over goalkeeper Brown only for McIlwaine to clear the ball away from right under the crossbar.

That proved to be a pivotal moment as within 30 seconds Ballinamallard won a corner, and BJ Banda’s delivery was right on top of John Connolly, who was beaten to the ball by McIlwaine, who flicked a header into the net to make it 1-1.

‘Stute were not content to hold on to the draw and they continued to attack in the second half, and young Patrick McLaughlin's downward header was blocked on the line by Richard Clarke.

Disaster struck ‘Stute on 63 minutes when BJ Banda went down in the area under a challenge from Shaun Doherty and referee Shane McGonigle pointed to the penalty spot. Doherty was furious with the decision but there was nothing he could do as Banda picked himself up to power the ball into the bottom corner past Connolly to make it 2-1.

That proved to be the winning goal as 'Stute, despite their efforts, couldn't find a goal their performance deserved.