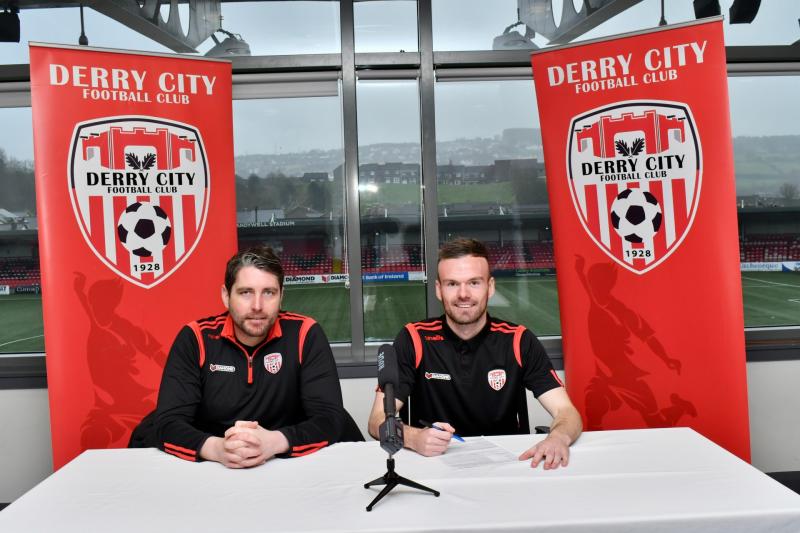 Ruaidhri Higgins believes that Cameron Dummigan and Brandon Kavanagh’s best years are still to come after welcoming the duo to the Brandywell.

Dummigan is the fourth player to sign for City after leaving Dundalk, and follows in the footsteps of Patrick McEleney, Michael Duffy and Will Patching. The wing-back has been a key part of the success at Oriel Park in recent seasons and now brings that experience to the Brandywell on a two-year deal.

"I'm over the moon to have signed for Derry and buzzing to get it over the line,” he said. "I had a few offers but once Ruaidhri was interested my mind was made up, as I just wanted to play under him. Ruaidhri proved last year with what he did with Derry and obviously I hope next year is exactly the same if not better.”

Higgins, who knows Dummigan from his own time at Dundalk, was thrilled to add the 25-year-old to his squad.

I’m delighted to welcome a player of Cameron’s quality and versatility to the club. It is very rare that a player is equally effective in a number of positions, but that’s certainly what he brings us.”

“He has a wealth of experience behind him and is still only 25 years old so I would like to think he’s joining the club with his best years ahead of him.”

Meanwhile, City have also agreed a deal with Shamrock Rovers to bring highly-rated winger Kavanagh to the Brandywell. Named on the PFAI First Division Team of the Year, the U21 Irish international is expected to do big things in the years to come.

"It was a big decision for me, but I'm delighted everything is now sorted,” he said. “Derry City are certainly on the up and it's a journey I want to be a part of and I can't wait for it to start. I have got games under my belt and I'm not ready to go.

"Our dressing room is full of talented boys, but I can't wait to go in there and train with them every day and play with them, so yeah it's a big opportunity for myself."

A delighted Higgins believes he has signed one of the best young players in Ireland.

“Brandon is a player I’ve admired since he burst onto the scene at Shamrock Rovers a few years ago,” he added.

“He is a very gifted footballer with huge potential. At only 21 years of age it will be exciting to see how he develops in the coming years at Derry City.”