End of season review from a memorable 2021 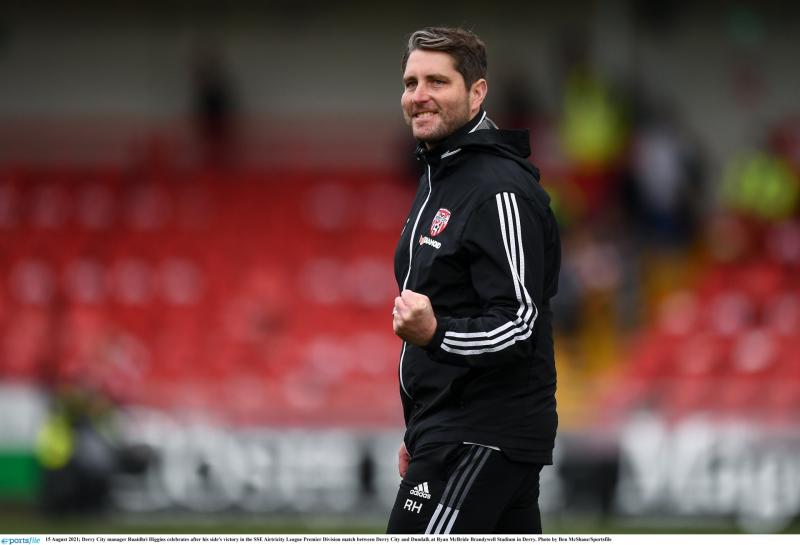 There seems to be no such thing as a quiet, run-of-the-mill season for Derry City and 2021 has proved that once again.

From the disastrous start to the season which saw Derry bottom of the league after six games and Declan Devine removed as manager, to the arrival of Ruaidhri Higgins and the climb up the table, there is so much to look back on over the past 8 months.

There was quite the difference between the team which started the campaign, and that which ended the season in fourth place – both in terms of personnel and belief and suddenly Derry City fans are looking towards 2022 with great excitement.

There were moments of great excitement, and others of great disappointment, but finally there seems to be a real direction about the club and the 2021 campaign could well be looked on as the year that things finally started to change for the better at the Brandywell.

Derry News Sports Editor Gary Ferry looks back on a memorable season and hands out the awards for those Derry City players who have really caught the eye in 2021.

PLAYER OF THE SEASON

There have been some stand-out performers this season. Joe Thomson has come into his own, Ciaron Harkin has been back to his best, and Jamie McGonigle has been a revelation. But Ronan Boyce has been the stand-out by far.

The 20-year-old broke through to the first team and became a regular this season, first appearing as a substitute against St. Patrick’s Athletic in March, and going on to make 34 starts and 2 substitute appearances.

Boyce made his Derry City debut as a very late substitute against Shelbourne last October but came into his own this season and scored his first senior goal in the 1-1 draw with Drogheda United at the Brandywell in April. That was a real sign of things to come and the defender went on to score six more times, with goals against Waterford, St. Patrick’s Athletic, Sligo Rovers (2), Shamrock Rovers and Bohemians.

The youngster’s goals were very often crucial to the team, with his seven goals earning the Candystripes seven points in all. 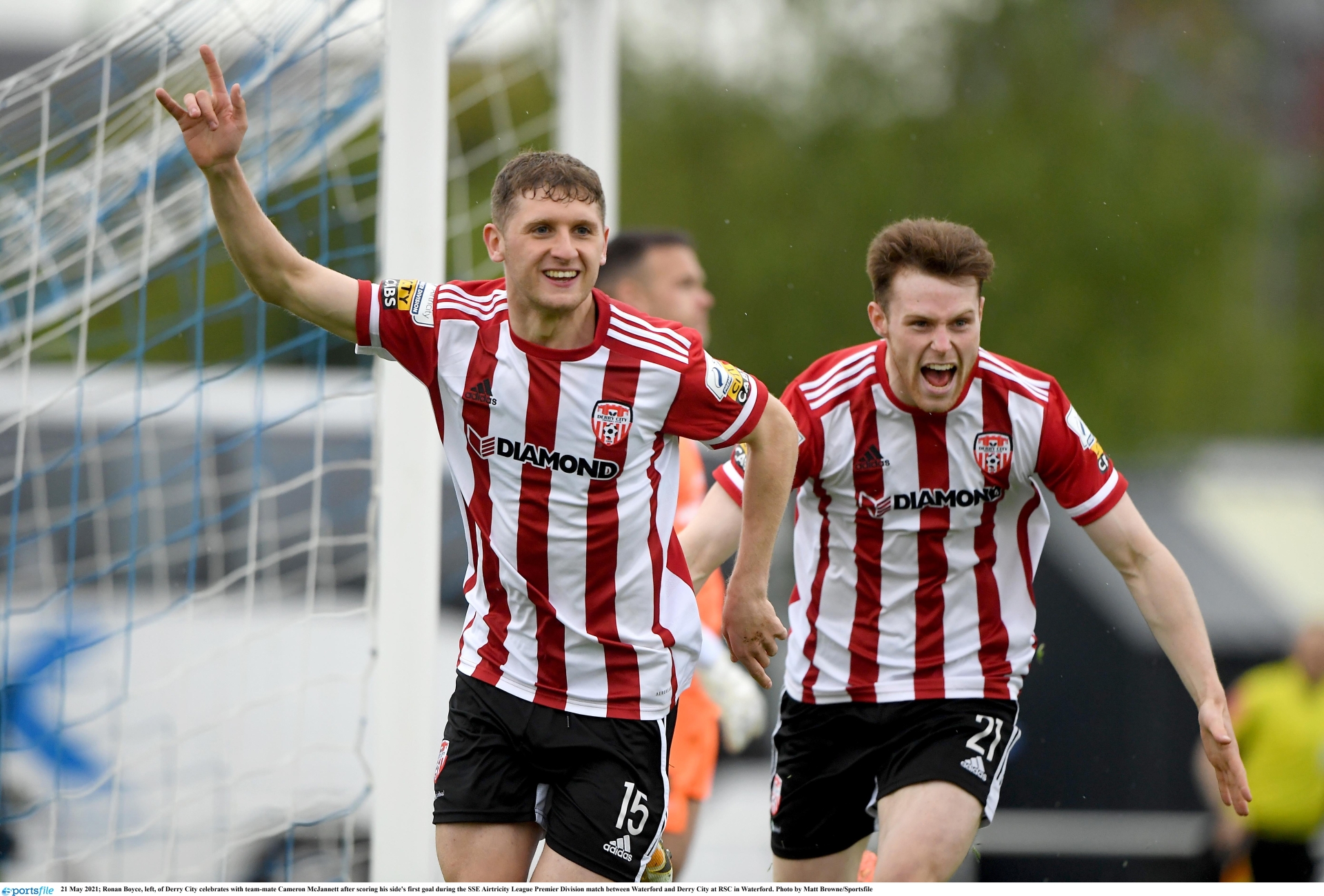 GOAL OF THE SEASON

If any game stood out for Derry City this season, then it was surely the 3-3 draw against Bohemians at Dalymount Park in September.

Trailing 1-0 at half time, Derry City responded with a sensational display of attacking football in the second half. The equaliser which brought them back into the game was out of this world, as Jamie McGonigle collected a pass from Junior Ogedi-Uzokwe, approached the Bohs penalty area from the left wing before curling the ball exquisitely around the defender past James Talbot into the top corner. It was enough to make Ruaidhri Higgins and everyone on the bench race onto the pitch in celebration and was a goal which deserved to win any game.

Two Four goals followed that strike as a Georgie Kelly worldie deep in added time denied Derry the win, and ensured the first 3-3 league draw in 19 years; but that goal from McGonigle has not been forgotten. 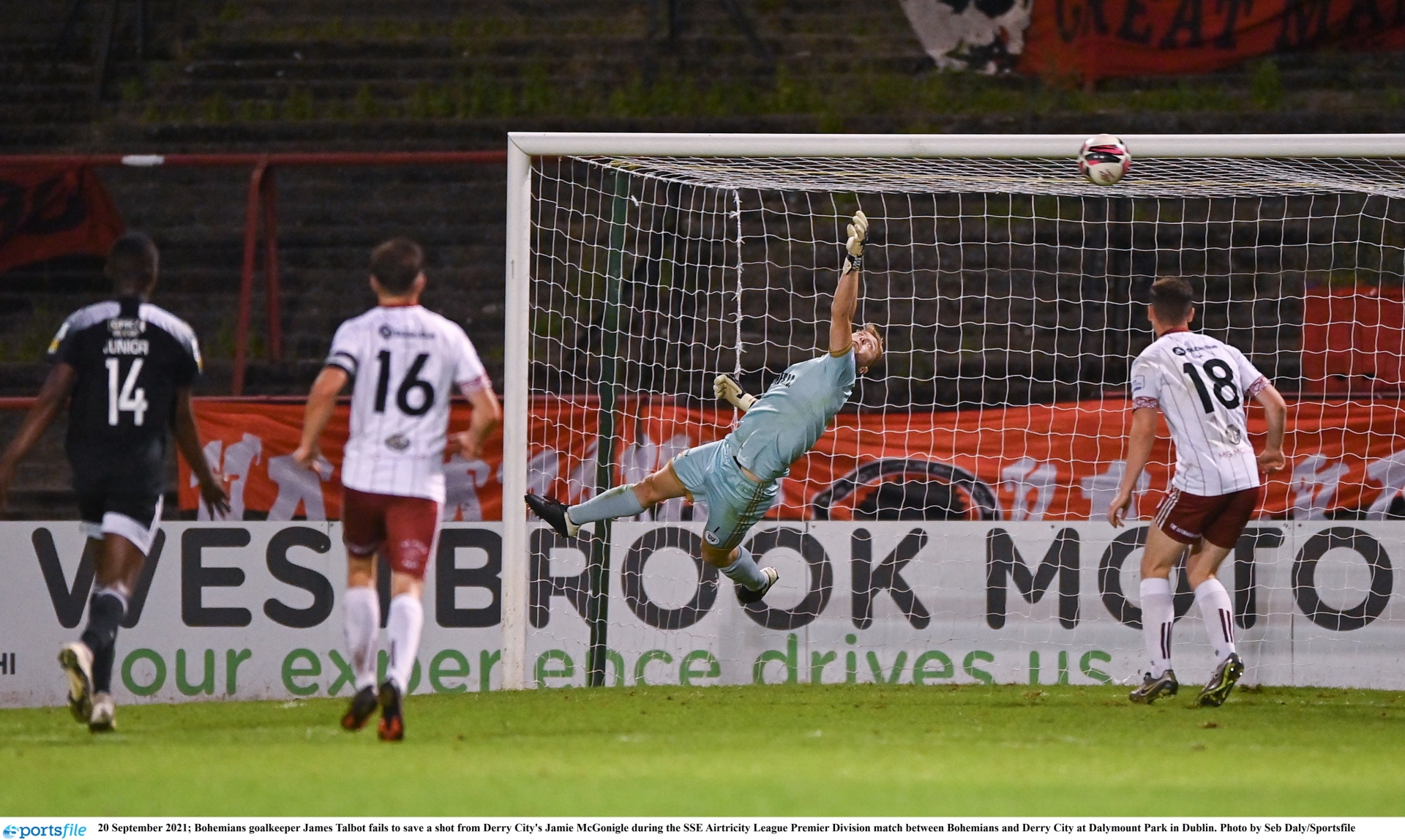 Since Ruaidhri Higgins has come in as manager, Joe Thomson has really stood up to prove invaluable in the Derry City midfield. His battling qualities, as well as his passing and ability to transition from defence to attack has really made him stand out this year, making 23 starts and 4 substitute appearances in all competitions. But it is his ability to shoot which has taken him to another level. He doubled his goal tally this year, scoring four times, against St. Patrick’s Athletic, Waterford, Sligo Rovers and Finn Harps, and some of them were absolute belters. He also chipped in with five assists and unsurprisingly signed a new deal recently to keep him at the club next season. 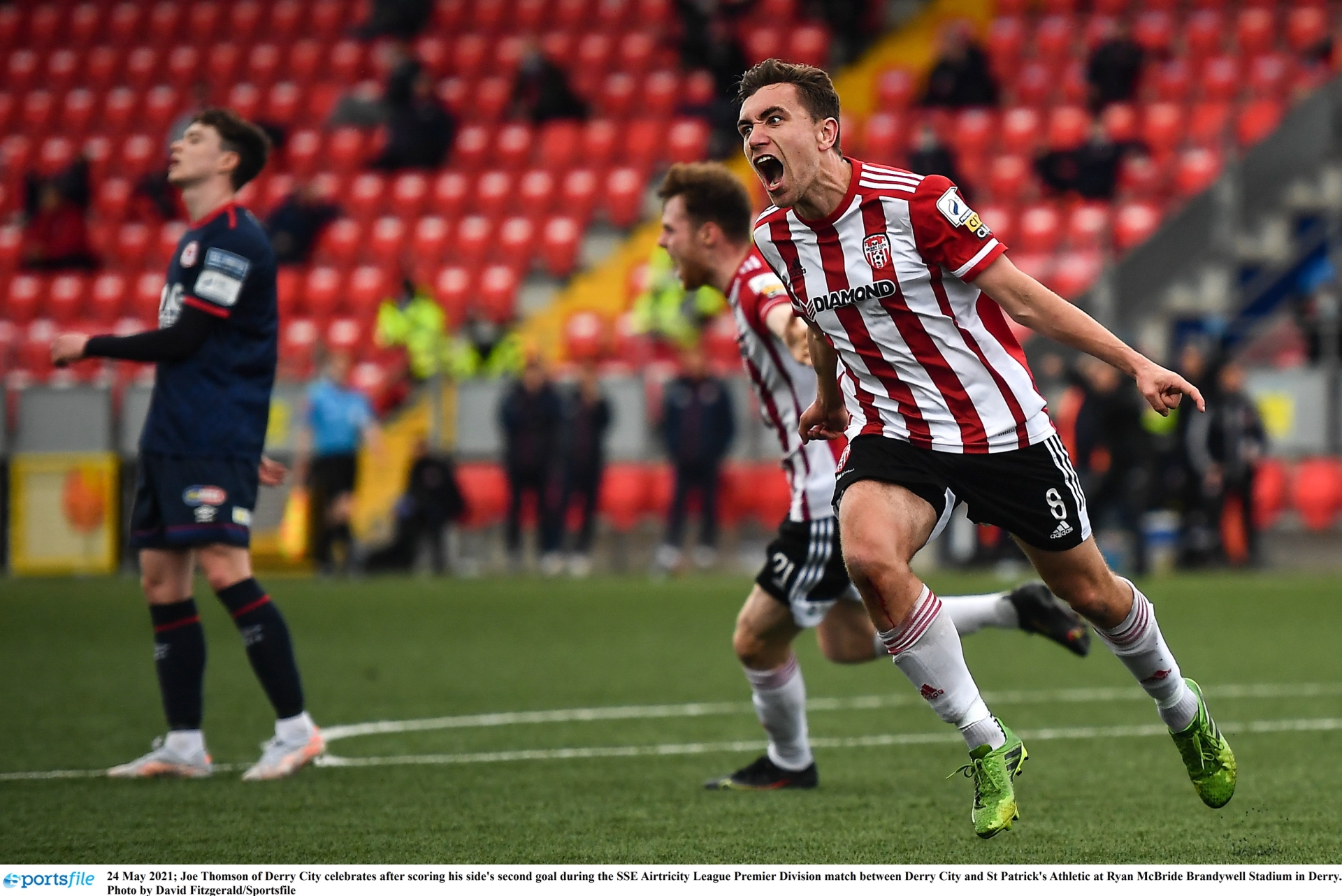 Since joining Derry City in June, Jamie McGonigle has proved just why Ruaidhri Higgins is such a huge fan. After a stop-start beginning to his life as a Candystripe, McGonigle has been superb. Be it his incredible goal against Bohemians, or his late penalty against Finn Harps, McGonigle has proved that he is the big man for big moments. He has already scored two winners against Dundalk, and scored four goals in his last three games to finish as Derry’s top scorer with 8 goals, even though he joined in mid-season. In 18 appearances, he has provided 8 goals and 2 assists, and with a good pre-season in the coming months, he could be unstoppable next year. 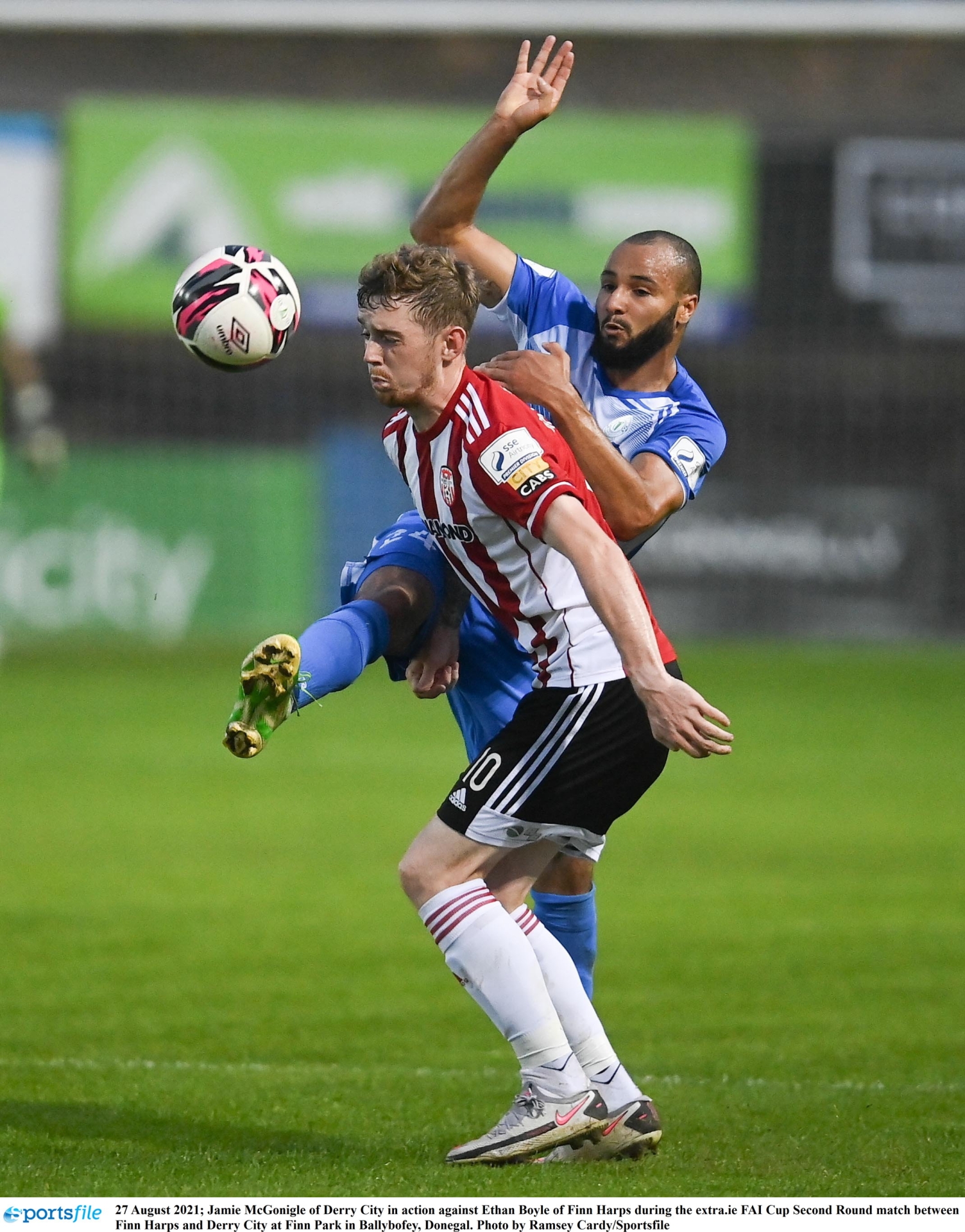 BEST MOMENT OF THE SEASON

It might not have been the greatest game, but the victory over Dundalk on August 15 was long, long, long overdue. Derry City had suffered against the Lilywhites for close to a decade, and any type of win was needed just to get that monkey off our backs. It came as a result of a Jamie McGonigle penalty, and also gave Derry a win over one of the so-called big teams in quite a while.

It was the first Brandywell victory over Dundalk since October, 2012, when a Derry City team which included Ruaidhri Higgins won 4-0.

That win gave City some real belief and they followed that up with their first win at Oriel Park since 2013 by winning 2-1 on the final day of the season to secure fourth place.