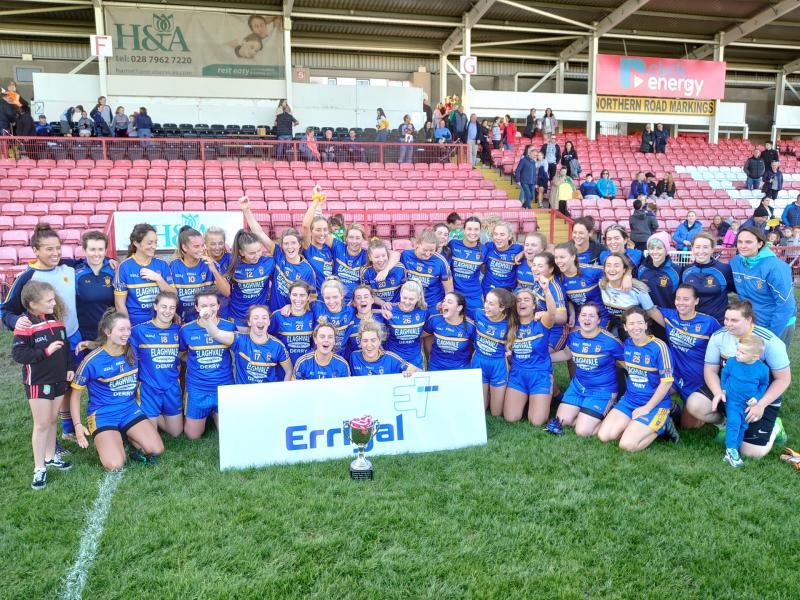 Steelstown Ladies are hoping to add to their County Championship win last month.

Steelstown Ladies are hoping to end an historic week at the club by winning their second Ulster Championship title in Auger today.

Just days after the senior men’s’ team won their first ever Championship by defeating Greenlough, the ladies take on Fermanagh champions Kinawley, hoping to make it a silver-lined November for Brian Ogs.

That Intermediate title win, followed by Brian Og McKeever’s anniversary and now an Ulster final – it has been an emotional week for the club, and another victory today could ensure this as a defining spell for the Ballyarnett side, as the best in Derry and the best in Ulster.

This ladies’ team has talent, but perhaps more importantly is its experience. Six of the current squad played in that last Ulster final in 2015, when Steelstown defeated O’Neill Shamrocks 1-07, 1-04 to win the competition for the first time.

The difference between then and now is that Steelstown is now a team used to the big occasion – they are the Derry County champions two years in a row, and have proven their worth – in many different ways – in Ulster since. This is a team that knows how to win, and they are once again just one game away from creating yet more history.

“Our aim at the beginning of the year was to first of all regain our Championship title,” Leah McGonagle says. “That was the big one. Once we won our title back, it was about ‘Right, let’s go and enjoy our football and play into November’. We hadn’t played that far into the year before, so it was nice to keep going. The longer you go in a competition, the longer you get to train and the longer you get to go out every night and enjoy yourself, and that’s what it’s all about really. We’re delighted to be as far as we are and now it’s the final stretch and hopefully, we can get over the line on Saturday and get an Ulster title under our belts.”

It hasn’t been an easy road to the final. In fact, you could go all the way back to last year, when they hammered Monaghan champions Magheracloone before covid brought a premature end to the competition. Driven by that disappointment, the girls faced Letterkenny champions S. Eunan’s in an incredible game which ended 6-14, 5-8. They followed that up with a 2-12, 1-6 win over Antrim champions Niamh Brid on Saturday. The games have been relentless since beating Ballinascreen in the county final last month.

Of all the games, it was that one against St. Eunan’s which stands out for Leah.

“It gave us a shock and maybe a wee kick that we needed,” she admits. “We knew what we needed to improve on going into the semi-final then and, looking back, it was probably a good thing because it helped us manage Saturday a wee bit better. It was a bit of a shock to the system because we hadn’t been used to conceding as much as we did that day.

“In saying that, we did really well to score as much as we did that day. Our forwards played well and as a team we played some nice football but as a team we had to strengthen up defensively after that and thankfully we did that on Saturday. We were much more composed and probably not as nervous. Maybe the first game in Ulster we were a wee bit nervous and we really wanted to get past it because that’s where it stopped for us last year.”

Leah could possible be the first name on the team sheet for the management team of Thomas Cusack, James McGurk and Seb Crudden; the full-forward has been sensational in recent weeks, scoring 4-4 against St. Eunan’s and 1-3 against Naimh Brid. As pleased as she is with that, she knows it’s ultimately a team effort.

“I’m happy with my own form but I’m just happy that it has helped the team and that we’ve got this far,” she continues. “I was injured for a lot of the season again; I’m very injury prone so it’s nice to come back to get back into it. I was playing in a couple of different positions but I like being in the full-forward line and I was happy that I was back in the score sheet and was able to help the team.

“We have some brilliant full forwards; even the likes of Ella Rose, I think she scored 4 points on Saturday on her own, and Aoife Collins also. It’s definitely not just about me, we definitely do have some incredible forwards and we’re very lucky that we’re not just relying on one or two people to score. We can all chip in with scores; we’re not relying on one person which is nice, and we all dig deep to help the team get over the line.

“The only people you’re trying to prove yourself to at this stage is yourself. You want to go as far as you can and that’s what we’ve done; we’ve played each game as it has come and not looked too far ahead of ourselves.”

Little is known about Fermanagh champions Kinawley, but that has been the case in every round of the competition so far. For Leah and her team mates, it is about trusting in their own ability on the day.

“Ulster finals don’t come around that’s for sure,” she acknowledges. “We have worked hard all year to get to this point; every single person has put in so much hard work. We’ve had girls come back from long-term injuries which has really helped us out and we’ve got girls like Katy Holly who are out injured.

“It’s important as a collective that we’re doing it for everybody, and obviously with the success of the men last week, winning their county final and Brian Ogs anniversary on Monday, it’s a really good time for the club, and the club is on a high.”

There will be plenty of support coming from the sidelines today and Leah’s fingers are crossed that 2021 can be Steelstown’s year again.

“We know it’s not going to be easy. Kinawley have been in 4 of the last 5 Intermediate finals so they will be all guns blazing and they will want to win an Ulster title as much as we will as well. It’s not going to be an amazing task, and we know that and we’re prepared for that.”