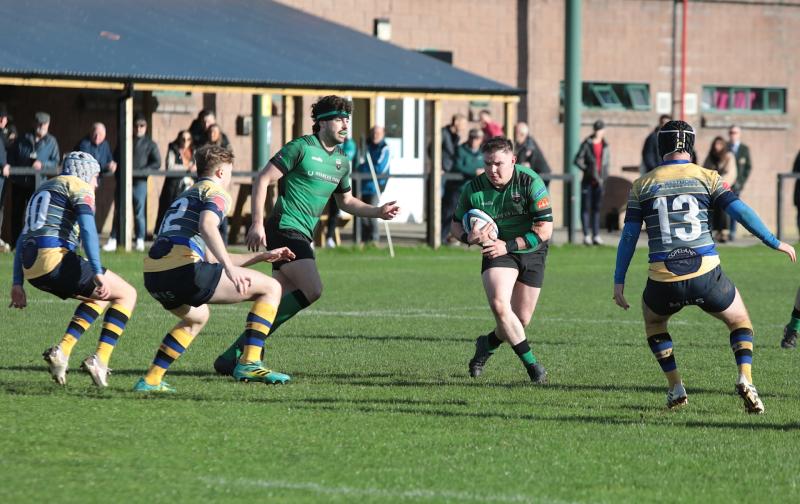 Six points from four games is not a fair reflection of the improvement in City of Derry in recent weeks, who travel to winless Bruff this weekend hoping to get a result which matches their performance.

Coach Richard McCarter was left frustrated again last Saturday, when despite leading early in the second half, events conspired against the home team, with prop Sam Duffy harshly sinbinned, allowing Bangor to turn the game on its head and come away with a 23-16 victory. It meant a bonus point for Derry, but that was scant consolation for McCarter who believes his team, not for the first time this season, should have won.

“It could prove to be an important point come the end of the season, but at the time it definitely didn’t feel like much of a consolation,” he admitted. “It’s important that even if we don’t win, we have to pick up something. I wouldn’t say it was a good point but it could prove important.

“We’ve got to take our chances and when we’re on top on these sorts of games against good teams we have to put them away and we were just guilty of not being clinical enough on Saturday. But if we keep performing the way we’re doing, with the same attitude and commitment then another victory won’t be too far away.”

The victory over Sundays Well two weeks ago was incredibly important for McCarter and his players, who needed that shot of confidence after a torrid start to the season. Currently in seventh place, the points on offer this weekend could dictate the direction of both teams’ seasons.

“There’s a group of us below the top four who are all going to be in and around fighting against each other and this is definitely one of those games,” McCarter explained.

“They haven’t won a game yet but they have been involved in close enough matches.  It is definitely winnable but we are going to have to be at our best and play our typical away from home form, which has been quite good this year. The two games that we’ve played we’ve won one and should have won the other won. Again, we’ve got to be clinical this week and take our chances when they come around.”

Experience of winning away could be so important, especially heading into a game such as this weekend’s, with Bruff desperate for a first win themselves.

“We seem to have got that right in the last couple of away trips, because the boys have been really focused and that was a big factor in the victory against Sundays Well. Everything about that performance was really focused and I hadn’t seen that side of us in a while which is great, so we just need that same attitude again going down this week. We just have got to have a go at them and assert our dominance on the game as well.”

Simon Logue, Neil Burns and David Lappsley all returned to the Derry squad last week, and it looks as if the crippling injury list, which really held the club back at the start of this season, is finally improving.

“I think results will improve now,” McCarter concluded. “Even from when we started the All Ireland, if you take away the Enniscorthy game at home, we have played pretty well in all the matches. It’s okay playing well, but we just need to get to the other side of that now where we’re getting over the line in terms of the result, because that’s what we’re going to be judged on, but if we keep performing the way we have done in the last few weeks, then our next victory won’t be too far away hopefully.”