Steelstown's championship story is not 'Dunne' just yet 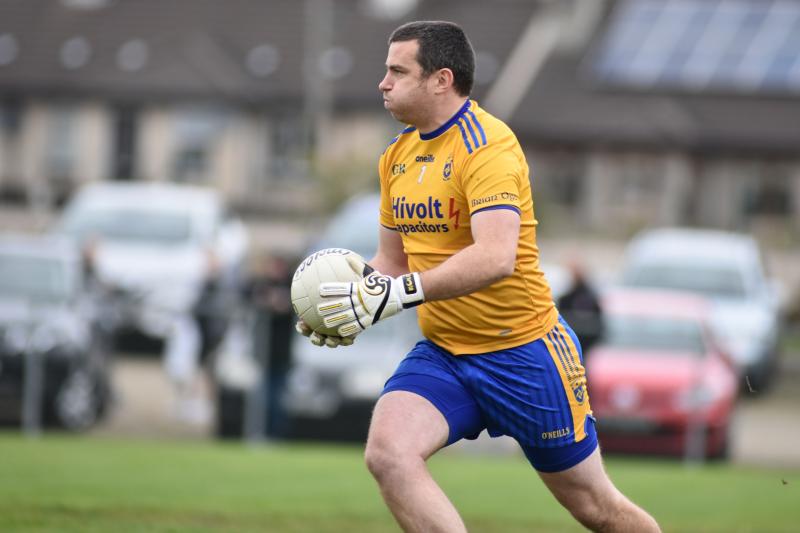 Steelstown goalkeeper Marty Dunne is hoping to finally get his hands on the Intermediate title. Pic by Mary K Burke.

The veteran goalkeeper has been there through it all over the years, the joy and excitement of reaching Intermediate finals paling in comparison to the pain of losing them, and often in such cruel circumstances.

Dunne could only watch on as Paddy Henry’s effort 30 seconds from the end, won the game for Castledawson at Celtic Park in 2010. He had to wait another six years for a second chance, only for Castledawson to defeat them by a single point again, this time at Owenbeg. Whilst not as dramatic as Henry’s winner, the loss of a last minute Steelstown free kick, due to Mickey McKinney lashing out at Niall Keenan, saw the opportunity for a replay lost, and Steelstown bodies crashed to the ground in dismay at the final whistle.

Four years later and it seemed it might finally be Steelstown’s year – they held a good lead against Greenlough at Bellaghy, but they let it slip, and an error by Dunne himself led to a goal for Michael McDonnell in added time. There was no way back.

So, in 2021, Steelstown still await their first title, and Dunne, still going strong at 37, has one more chance to get his hands on a trophy that has eluded his grasp for over a decade. This will be his fifth final - fourth Intermediate, one junior - and he knows just how fortunate he is to get another opportunity.

“It's one thing you understand when you get older; you appreciate them more and you look forward to them,” he said. “You know they are not going to come around all the time. When you’re younger you think ‘we’ll get plenty of these’, but you realise how sparse they are now so it’s good to be in it again and get another chance at it.

“We would have killed to be back in this position after last year. A lot of teams could just fade away after something like that and not get back up there again, so we’re lucky in that regard in that we’re straight back where we want to be and we can have another rattle at them.”

Last year’s final is still fresh in his mind, and it is he who brings up his short kick-out which led to that late McMullan goal. That is a regret, but he doesn’t lose sleep over it.

“These things happen in matches,” he acknowledged. “All you can do is try and put it right again. Once it’s done it’s done. You are a goalkeeper and you’re going to make these mistakes, so these things are going to happen, especially in the heat of a final when you’re trying to rush things and trying to do things. It will not be in my head anyway, that’s for sure.

“We were up by three points I think going into the final quarter and we never really kicked on. We kind of sat back and we never pushed on to get that result. You always think you should have won it and my contribution at the end didn’t help. These things happen so I’m looking forward to getting a second chance at it.”

Everyone knows by now that Steelstown are still without that elusive first title, but Dunne, who has every right to feel that the club deserves one by now, does not believe that the weight of history should be a factor this weekend.

“The first one is always the hardest to get over the line, but it’s a different group of players,” he explained. “I don’t think the young boys will be too concerned about that, it’s still just one match against Greenlough who are a good side and it will be hard to win. You would like to experience getting over finals, but the only way you can do that is by winning your first one.”

It is impossible not to notice the progress made at Steelstown over recent years- from their senior ladies, to their reserves, to their underage work – the club is synonymous with success in so many ways. Dunne has enjoyed being a part of that, but he knows from the grassroots up to senior, nothing can ever be taken for granted

“There’s been ups and downs but you always think it’s going to be a straight line up,” he reflected. “Going into senior was brilliant; even though we didn’t win Intermediate, we stepped into senior and that was good, getting a run at senior. I wish we had stayed there, it’s disappointing to be back down in Intermediate, because we could have stayed on there.

“This group of players are good enough for senior and that’s where they need to be. In the long term that’s what those guys need.

“You always want the trajectory heading up the ways and that’s the next step but you want to win a championship. That’s the point. If we were to get that it would definitely help that group of players push on. It seems that every time Steelstown are in a final it’s a young team, but we probably have a better balance than we ever had; there’s plenty of older heads there and younger boys spread throughout the team.”

Hugh McGrath’s team were very impressive in Sunday’s semi-final win over the Limavady Wolfhounds. The 2-19, 1-8 victory was borne from slick and clinical attacking play and the game was over as a contest by the half time break. Steelstown are going into the final with great momentum.

“We have to go at them and take them on, and get the scores on the board and be confident. We did that in the final against them last year but then we dried up and didn’t really push on, and we sat back a bit which isn’t really our style. You can’t throw away 9-point leads or 6-pount leads, you just can’t do it because you can’t stop momentum then if it turns against you. You have to keep pushing on.”

Dunne had decided to retire two years ago, but he was convinced by Eamon Gibson to return last year, and as 2021 comes to an end he is still the main man for Steelstown. He knows by now not to look too far ahead, but he would dearly love to get that trophy in his hands before that final game comes. What a fairytale ending that would be for a terrific club servant.

“I’ll not look beyond Saturday’s match and see how it pans out from there,” he said. “Things could be very different depending on the different outcomes, so I haven’t given too much thought to it.

“That’s why you keep going, because you want to win something. There’s plenty of people out there who don’t even get the chance to get to a final, plenty of players who have played for a lot longer than me and haven’t had much to show for it. As much as you can look back and say it’s disappointing not to win, at least you have got this one more chance, and that’s all you can ever have, that one chance every year, so take it, and I’m just looking forward to that.”