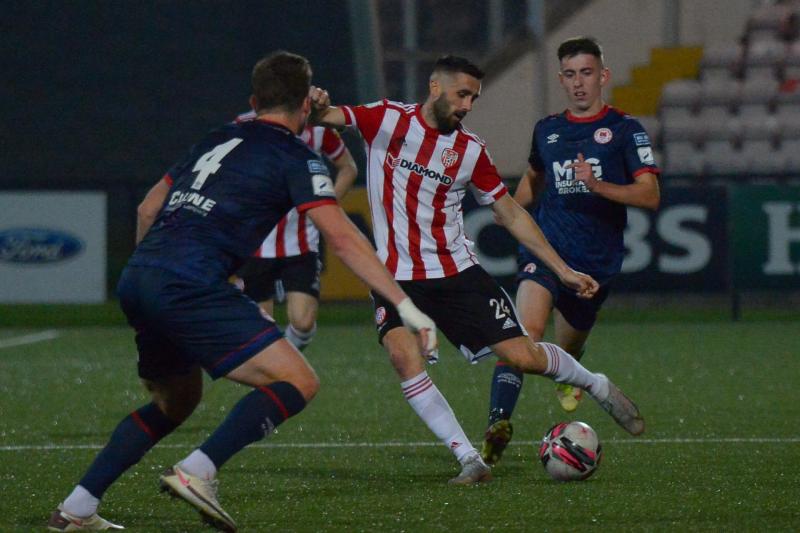 Junior Ogedi-Uzokwe’s second half header was enough to earn Derry City their first win over St. Patrick’s Athletic at the fourth attempt this season.

The striker struck midway through the second half to earn a big three points for the Candystripes in a dramatic encounter which saw both teams finish with 10 men.

Pat’s were on top for most of the game up until Junior’s goal, missing a series of chances in the first half alone.

The visitors started the game on the front foot and almost got their reward when Sam Bone’s cross found Matty Smith, and his header beat Nathan Gartside but came back off the post.

Matty Smith then missed when one on one with Gartside, before Chris Forrester hit the crossbar.

It was City though who took the lead on 63 minutes. There seemed little on when substitute Jack Malone’s pass sent Jamie McGonigle racing down the right, but the striker produced a sensational cross right into the heart of the area for Junior Ogedi-Uzokwe, who simply had to nod City into a lead they had not been threatening.

The game exploded into drama on 84 minutes when Ronan Coughlan, on the pitch just 4 minutes, was red carded for elbowing Ciaran Coll. Danny Lafferty, already on a yellow card, was also sent off for his part in the melee which followed the elbow, with both team playing the final five minutes down to 10 men.

Pat’s, still searching for an equaliser, came so close to a goal in the aftermath, but were denied by a brilliant double save from Gartside, who parried Matty Smith’s shot and then reacted to save from Benson as Derry survived again.