Midfielder in talks over new contract 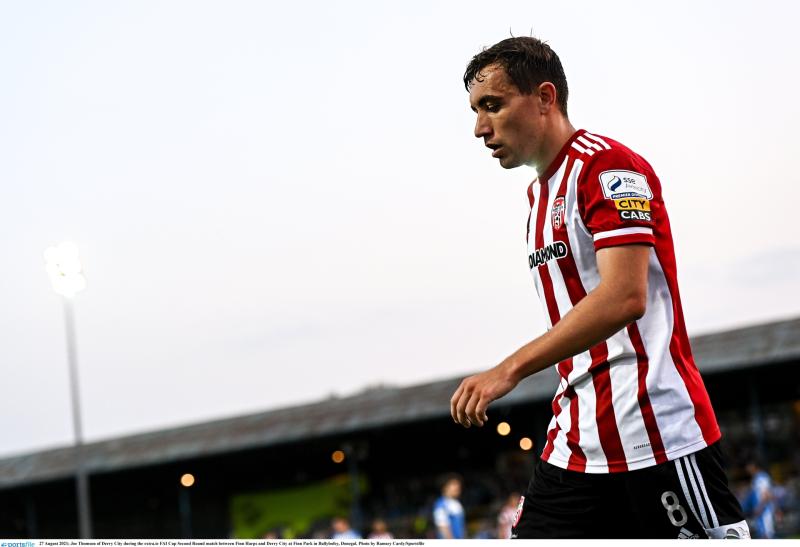 Joe Thomson wants to remain at Derry City next season.

Joe Thomson wants to stay and be a part of the exciting times at Derry City into next season and beyond.

The midfielder, who joined from Dunfermline in July 2020, is nearing the end of his current contract at the club, but is in no doubt that he wants to remain at the Brandywell. The 24-year-old has been a key part of Ruaidhri Higgins’ team in City’s surge from the bottom half of the table to fighting for European football, and is currently the club’s top scoring midfielder with four goals.

Having worked with Higgins since April, and seen a big improvement in his own game in that time, Thomson is certain that he wants to remain in red and white going into 2022 and has admitted that he and the club have already begun talks about a potential deal.

“We have had a couple of chats over the last couple of weeks so we’ll see what happens,” he said. “I think Ruaidhri is starting to get the best out of us; this is probably the best I’ve played since getting back from a knee injury. I am really enjoying it and by the looks of it the club is going to be having a right go over the next couple of years. It is good times here and I think it would be good to be a part of.

Thomson is one of a number of players who have come to Derry for the first time and become taken with the city, and he believes the return of fans to games this year has only added to the experience for him.

“It’s been really enjoyable here,” he continued. “This is a city that really loves its football. If you go out in the car it’s very rare that you won’t see someone in a strip or a jumper from the club. They really get behind the club and I don’t think it’s any coincidence that with the return of fans back at the Brandywell that our home form is really dramatically improved because the fans are helping us. It’s much more enjoyable football now that the fans are back and it makes it better for the players.”

Thomson is as excited as the fans about the signing of both Patrick McEleney and Michael Duffy next season, and has no doubts that they will strengthen the team significantly next season.

“Patrick and Michael are obviously good signings,” he stated. “I know Michael because we were together at Celtic, and I know first-hand the ability he has got. Both players are proven winners, they have won this league and they have won everything in the country, and they have European experience. The two lads are obviously really good players and they are wanting to come back home and hopefully they can replicate what they did at Dundalk for Derry, so it is exciting times.

Thomson could make his long-awaited return to the starting eleven tonight against St. Patrick’s Athletic, having missed the last three games due to his red card against Finn Harps last month. The Scot admitted that it was hard to sit out games, particularly at such a crucial stage of the season.

“They are the games you want to be involved in especially at this end of the season when you need to pick up points in every game,” he admitted.

“Even the Longford game was big because every game for us is massive because of what we want to achieve so it wasn’t nice to sit them out. I’ve watched the games and thought the lads did well so we’ll try to keep some momentum – obviously the last result against Shamrock Rovers wasn’t what we wanted but hopefully we’ll be able to bounce back on Friday in another big game.”