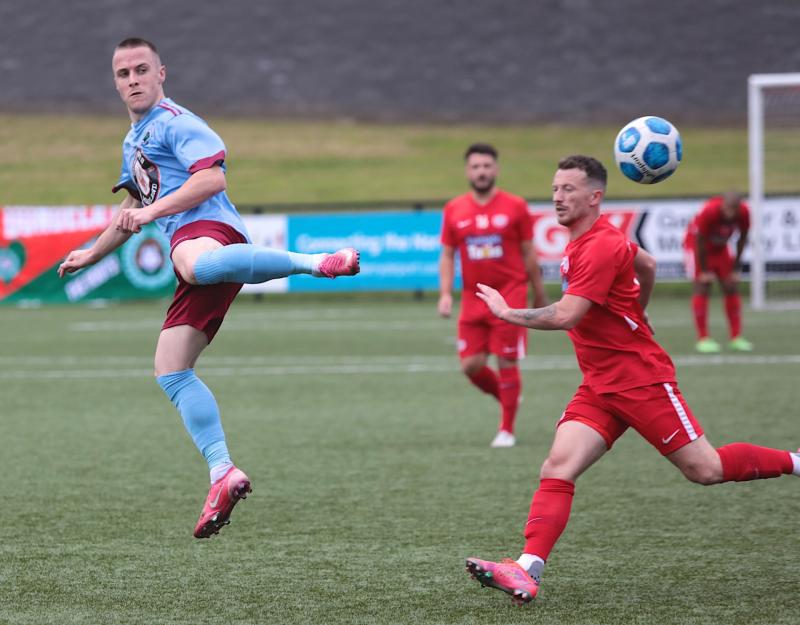 Benny McLaughlin is the club’s top scorer with six goals in all competitions.

Six wins in seven games has perhaps changed the perception of Institute in recent weeks, with Brian Donaghey’s team now going into games as favourites to win.

That winning mentality has seeped into the players ever since Donaghey’s arrival, and after six wins in seven games in all competitions, there is new life about a club which was on the floor just a month ago.

They are the form team in the Lough 41 Championship, with no other team managing four winning four of their last five league games and they are now expected to beat Knockbreda today and move even further up the table. That change in mindset is a challenge in itself according to Donaghey.

“I challenged the players last week because for the Queens match, people thought they were favourites, probably for the first time, and I asked ‘How do you cope with this?’,” he admitted. “We started very, very poorly and it took us 15 minutes to get to grips with it. That will happen in the Championship; I don’t think there’s a massive difference between bottom and second bottom, and top and second. Some of the results would prove that because the top teams are getting beaten by the bottom teams.”

Donaghey admits he is surprised that results have improved so dramatically in such a short space of time, but puts the upturn in fortunes down to the players themselves.

“If you were to say we would win six out of seven, I would have been surprised considering the fact that they lost their previous four and conceded 14 or 15 goals,” he said.

“Working hard is a given. They are taking on board any information they are given which is good. It’s a thing you get with young players where they want to learn, and they have good learning capabilities, which is brilliant start for any manager or coach.

“Getting the results also has given them that wee bit of belief. We’re embracing it, but we’re not getting ahead of ourselves.”

Benny McLaughlin was the hero again for ‘Stute last week, scoring yet another winning goal to take his tally for the season to six. He has been a massive factor in ‘Stute’s winning run.

“Benny is a threat, and he will tell you in hindsight he should be sitting on double figures because he’s had quite a few chances,” Donaghey continued.

“He’s a bit of a talisman at the moment, and even though his girl had a baby last week, he was the first one to say he would be there for the game. I just thought that was something I’m trying to recreate in the squad, that we’re a family and we will pull each other out when we need it and we’ll do things together and enjoy the good days together and we’ll get through the hard days as well.

I’m pleased for Benny, but he’s only as good as the service he’s getting from the players around him as well.”

Favourites they may be this time, but Donaghey knows that means little in such a competitive division.

“If you’re not on it 100% in any game in this league, you’ll get found out,” he said. “We just want to get a bit of momentum and hope that whatever information the players get they can act on. We aren’t getting too far ahead of ourselves; we want to accumulate as many points as we can between now and Christmas and then we’ll see what we need, and maybe look for a few players in certain areas.”