Defeat for Derry City at Tallaght despite taking an early lead 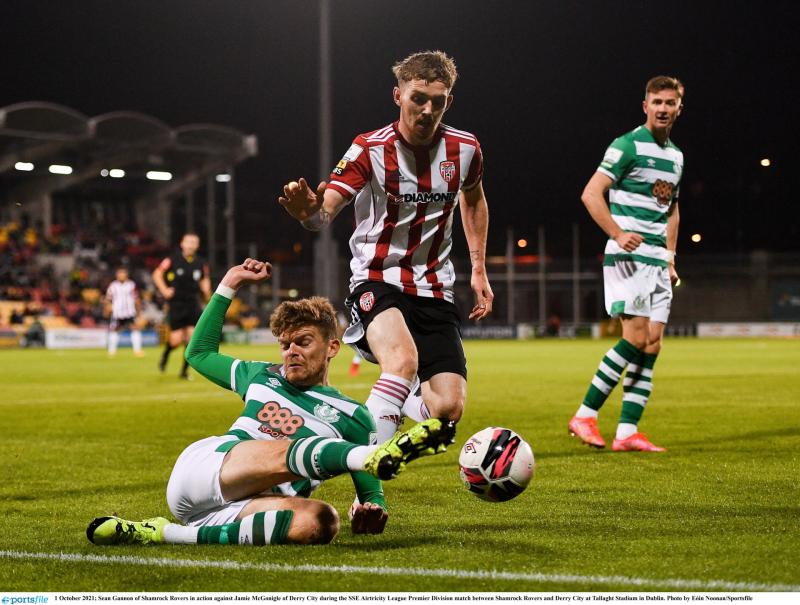 Derry City’s unbeaten league run came to an end at Tallaght as they fell to a narrow defeat to Shamrock Rovers.

Ruaidhri Higgins’ team were seven league games unbeaten heading to the home of the champions, but despite taking an early lead through Danny Lafferty, they couldn’t hold on and in the end Rovers were comfortable in their victory.

Derry stunned Rovers by taking the lead just five minutes into the game. Jamie McGonigle won a free kick on the left of the home penalty area, and Jack Malone delivered an enticing cross which was met by Danny Lafferty who powered a header past Alan Mannus to silence Tallaght.

There was no surprise that Rovers responded strongly, and Nathan Gartside was called into action within minutes to deny Richie Towell, with the City goalkeeper grateful that Dylan Watts’ rebound was well off target.

Derry almost made it 2-0 from their first corner, Ronan Boyce latching onto the ball 8 yards from goal and forcing a brilliant save from Mannus, who then did well to leap upon the loose ball with Junior closing in.

That was a big moment as Rovers equalised just minutes later. Derry thought they had done enough when they cleared Rovers’ fifth corner, but a wonderful curling delivery from Finn picked out Lee Grace who sent a header past Gartside, who could do nothing as the ball flew past him into the net for 1-1.

A fascinating first half looked like it would finish level, but City gave away a needless corner, and that led to the second Rovers goal. Derry half cleared the corner but Rovers came right back at them and Rory Gaffney did brilliantly to flick it into the path of Danny Mandriou who kept his nerve to finish past Gartside to send the champions into the lead with the last kick of the first half.

Derry could have found themselves level early in the second half, and it was a head in the hands moment for Lafferty, who found himself completely free in the Rovers area from Malone’s corner, but he sent his header wide from six yards.

The second half was not as free-flowing as the first but Rovers eventually threatened when Mandriou crossed for Gaffney, but his downward header was parried by Gartside. Rovers kept pushing and Roberto Lopes came so close to scoring from a corner, but his header flew just over.

City had decent possession in the second half, but they were offering minimal threat, until Jamie McGonigle almost scored a goal from nothing on 69 minutes, flashing a brilliant effort just wide of goal when the ball fell to him on the corner of the Rovers area.

Rovers looked the more likely after that with Towell flashing a shot just wide before substitutes Aidomo Emakhu and Aaron Greene combined to cut Derry open, with only a late challenge from Harkin saving his team.