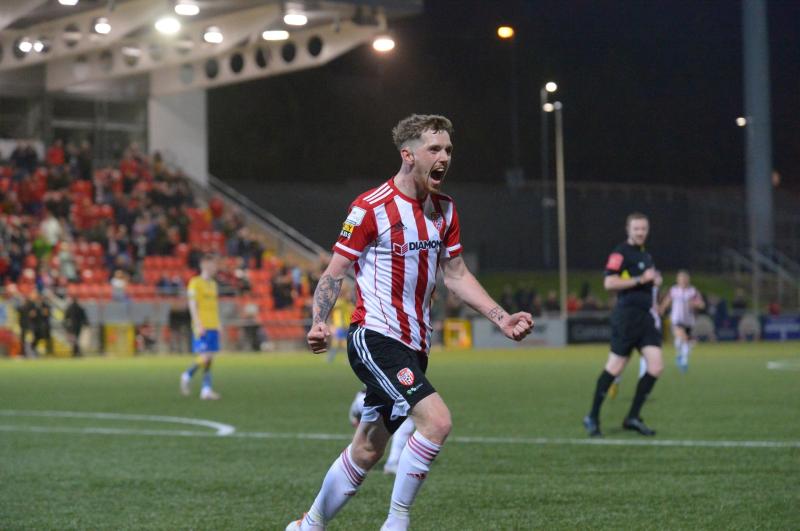 In a one-sided game, the Candystripes were too strong for the visitors.

A fairly low-key start at the Brandywell ended when Derry City took the lead on 16 minutes. It was entirely preventable from a Longford point of view as Eoin Toal’s high ball forward was flicked on by Junior Ogedi-Uzokwe into the path of defender Joseph Manley. The centre-half hesitated however and Jamie McGonigle took advantage, charging the ball down and racing clear to finish past Lee Steacy for his second goal in a week.

It was all Derry City and they doubled their lead just before the half hour mark. This time McGonigle turned provider, as his ball in from the right picked out Will Fitzgerald in the area, and his touch set up James Akintunde, whose shot from 20 yards took a big deflection off a Longford leg to wrongfoot Steacy who could only watch as the ball rolled past him into the net.

The Longford goalkeeper got his own slice of luck moments later as the Candystripes threatened to finish the game as a contest. Junior looked a touch ambitious when he lined up a free kick 35 yards from goal, but it was spilled by Steacy into the path of McGonigle, who would surely have made it 3-0 had an awkward bounce not taken the ball away from him at the crucial moment.

The dynamic of a comfortable game almost changed just minutes into the second half when Darragh Nugent burst forward from midfield, into the area and around Nathan Gartside, but shanked his effort wide and over of the open goal.

That was as good as it got for Longford however, and Derry got their third goal nine minutes from time. Evan McLaughlin’s pass picked out the run of Danny Lafferty in behind the visitors’ defence, and although his volley was brilliantly parried by Steacy, the ball fell for Junior, whose shot into the ground bounced over the goalkeeper and into the net for 3-0.