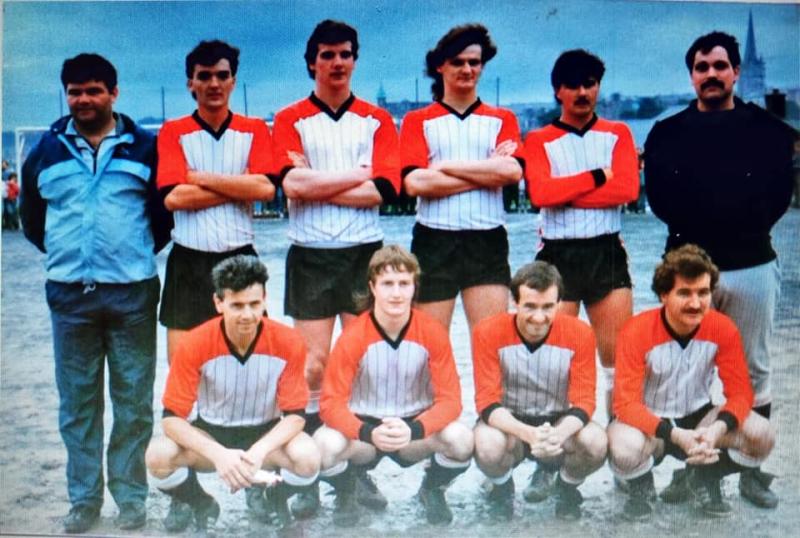 A player who never let his team mates down, Kevin ‘Crack’ McKeever remained well known and well thought of throughout the city long after he stopped wearing the red and white of Derry City.

Long-term City fans have been remembering ‘Crack’ this week following his sudden death at just 56 years of age, remembering a player who played in numerous positions for his team, with never a complaint.

A lifelong civil servant, Kevin also worked for many years in Derry Crown Buildings and had two spells with his home town club during his playing days. He was part of the team which played in the club’s first ever league game in the League of Ireland, against EMFA in 1985 at Buckley Park in October 1985, and he returned to the Brandywell in 1993 for a much longer spell. He made 92 appearances for Derry City overall, scoring 11 goals, and he has remained a popular figure locally since.

A minute’s silence will be held at the Brandywell tomorrow night in memory of the midfielder, ahead of the game between Derry City and Longford.

“He was a lovely big fella,” he said. “My first recollection of Big Crack was when I made my debut for Coleraine when I was 16 or 17 in the Bass Irish Cup semi-final. We played an unbelievable Portadown team and Crack was playing in the middle of the park with Roy McCreadie and boys like Joey Cunningham and Alfie Stewart and boys like that.

“They beat us 4-0 and I remember this boy in the middle of the park with the long hair. He asked me afterwards was I from Derry and only then did I realise that he was from Derry himself.”

Hutton and ‘Crack’ eventually became team mates a few years later, and while he was never the star of the team, he was someone everyone could rely on when needed.

“He would have dropped into defence or midfield or just play wherever he was asked,” Hutton recalls. “It was the same at Portadown as well. He was held in high regard up there by the supporters and the players who thought the word of him. It was exactly the same at Derry, he was versatile and he would have just gone in and done a job anywhere.

“Week in and week out he would have given you a seven or right out of ten; he would never have let you down anywhere he was asked to play. He would just have got on with it and was low maintenance for managers; he wouldn’t have been a fella demanding to be playing or causing ructions if he wasn’t picked.”

‘Crack’ was left frustrated when it came to the FAI Cup during his time at Derry. He played in the 1994 1-0 loss to Sligo Rovers, and was then an unused substitute in the 1995 success against Shelbourne. He was never allowed to forget that loss against Sligo by team mates who needed little excuse for a bit of fun.

“He loved the craic and the banter and the camaraderie in the changing rooms,” Hutton recalled. “He played in the final where we were beaten by Sligo. We always slagged him because it seemed that any chance we had in that game fell to Crack and he obviously didn’t score because we were beaten 1-0. He got dog’s abuse off the players for it, but it was just in jest.

“Obviously he didn’t get blamed for it but he did get dog’s abuse from the boys in the changing room for the chances he did miss. He scored in the next game we played against Sligo after that and he just got more abuse because he couldn’t do that in the final. He was just a lovely big fella who loved his football and he was just a nice fella to be around.”

Kevin’s funeral will take place from his home, 145 Templegrove, tomorrow (Friday) at 9.20am to Holy Family Church, Ballymagroarty for Requiem Mass at 10.00am. Interment afterwards in the City Cemetery.