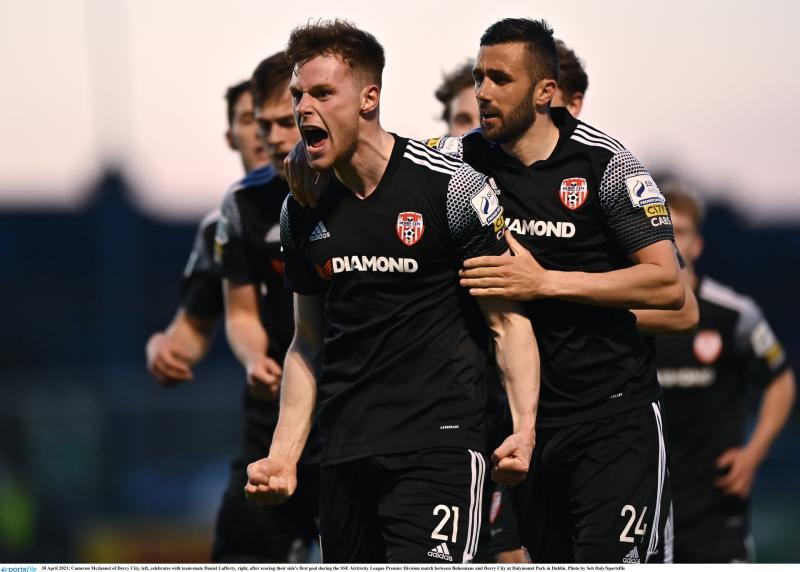 Derry City will be without THREE key players as they head to Dalymount Park to face Bohemians tonight. Kick off 7:45pm.

Ruaidhri Higgins will be without defensive duo Danny Lafferty and Cameron McJannett, who are serving a one-game suspension each for reaching five yellow cards this season, while midfielder Joe Thomson begins the first of a three-game suspension after his recent red card against Finn Harps.

It gives the City boss a headache going to Bohs, but he is confident that the players coming into the team will be able to handle the big occasion.

“They are three big blows but opportunity knocks and it’s set up for a few lads to come in and try and stay in the team and that’s what football is about,” he said.

“When the opportunity is handed to you, you have to go and take it and the players who are coming in are experienced enough, and big and bad enough to handle it and hopefully we can go to Dalymount Park and win.”

Derry and Bohs are in an intriguing battle for third place with Sligo Rovers at present, with the FAI Cup semi-finalists just one point behind the Candystripes with two games in hand. A win could be huge for either team in the race for European football.

“I think every game between now and the end of the season is a big game,” Higgins added. “There are three points on offer and we want to go to Dalymount and win. It’s been a good ground for Derry over the years and we won there earlier this season so we need to go and try and be positive and win the game again.

“After Monday night there are still 27 points to play for so whatever the result may be there will still be a lot to play for. It’s been two weeks without a game and 10 days without a game, but that’s the way it is, you have to deal with it and move on. We have two games now in four days so we need to try and make the most of it and pick up as many points as possible.”

City will face an opponent high on confidence after four wins in their past five games, including a victory over champions Shamrock Rovers, and a victory at Finn Park to end Harps’ long unbeaten run.

“They are a very good team,” Higgins agreed. “They have serious talent in their ranks, young players in particular with massive futures in the game and they can hurt you in any moment, but they will also be concerned about a few of our players.

“We have got really good players playing well and I think it will be a good game, and if we are prepared properly, we can go there and pick up a good result. I know we have a few suspensions, but the players we have coming in are more than capable of settling into the team and getting a great result down there.”

While a lot of national attention has been on the likes of Bohemians of late, and even Harps due to that 7-game unbeaten run, little has been made of City’s league form, with Higgins and his players hoping to make it six unbeaten at Dalymount.

“I don’t care,” Higgins insisted. “Forget about me or the staff, the players deserve great credit. They had a difficult start to the campaign and they have grown and grown by the week and I think they are at the start of fulfilling their potential a lot of them. We will pick up as many points as we possibly can between now and the end of the season, starting with a big game now on Monday and we’ll do everything in our power to win it.”