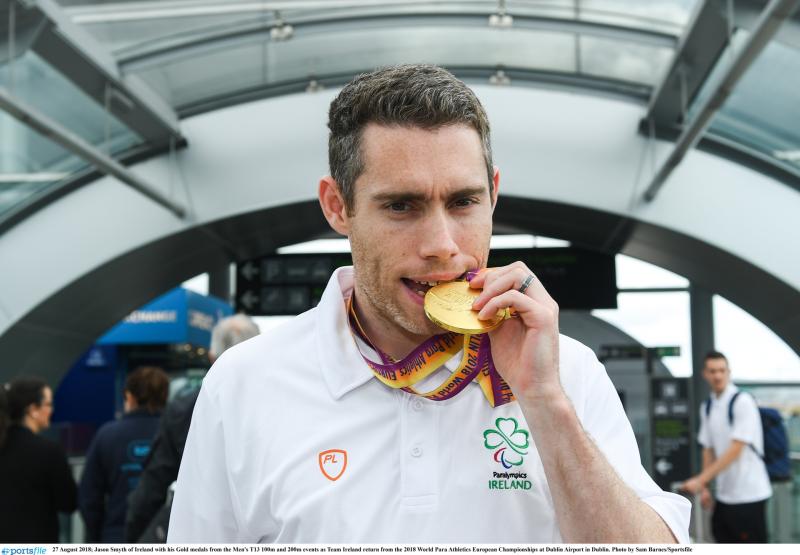 Jason Smyth’s past successes have not made him complacent in any way – if anything, they have made him even more determined to succeed as he heads into his fourth Paralympic Games.

The Eglinton made is part of the 29-strong Irish team which will compete in Tokyo, where he is fully expected to win the sixth gold medal of his long and illustrious career.

Beijing, London and Rio have all been highlights for Smyth as he has made his name as ‘The Fastest Paralympian on the Planet’, but the 34-year-old is not done yet. He wants that gold again, even if he knows the expectation is on him to win it.

"There's always a pressure associated with that in any situation really that you're going in with everybody's expectation of you winning," he said.

"Obviously in that situation you have nothing to gain because you can't do any better than winning but you've got everything to lose. But this isn't my first Paralympic Games. It's my fourth so I've been around long enough and experienced enough to learn and know how to deal with it.

"It's all about thinking about myself and the things that I can control and influence and that's my preparation and that's how I execute a race. I know if I get things right, then I'm in a good position and I'll be happy with that."

By now, Smyth is used to the pressure, and he is not fazed by it.

"There's probably two things with it - to enjoy it and I'd nearly say to just let things happen," he said.

"When we get to these big moments where there is a lot of pressure, it's very easy to start forcing things and get caught into the expectation and the pressure. But for me, if you can enjoy it and just let things happen, then good performances usually come with that."

Kellie Harrington’s achievement in boxing recently saw scenes of celebration across the country, and Smyth is hoping that there can be similar recognition for Ireland’s Paralympians in due course.

"Obviously there was huge excitement around Kellie’s [Harrington] achievement, and it’s been fabulous to see,” he continued. You’d hope now that we can take a bit of that [support] with us.

"The recognition isn’t the same. It’s improving but it’s still got a long way to go and it’s about how people buy into the Paralympics, which is often driven by the media."

Whatever happens in Tokyo, it will not likely be Smyth’s last hurrah. The Covid pandemic may have put the Games off by one year, but it has also brought the next Games in Paris in 2024 one year closer for Smyth, who is already thinking about competing.

"I've got better with time at being able to motivate myself. The challenge as you get older is physical - your body being able to generate the forces that you do,” he explained.

"You've got to adjust and realise that you can't do what you did 10 years ago and it's about being smarter with things. I've been driven by trying to achieve things that very, very few people do and that is trying to be extremely successful over such a long period of time.

"I don't know at what point that motivation stops or does it ever stop and maybe physically is what gives. For me, I'm enjoying it and I'm very much looking forward to competing in Tokyo and then reassessing where I'm at after that. It will only be three years to Paris. Is that where I go or not? There definitely is a temptation for sure now that it's going to be a three-year cycle."