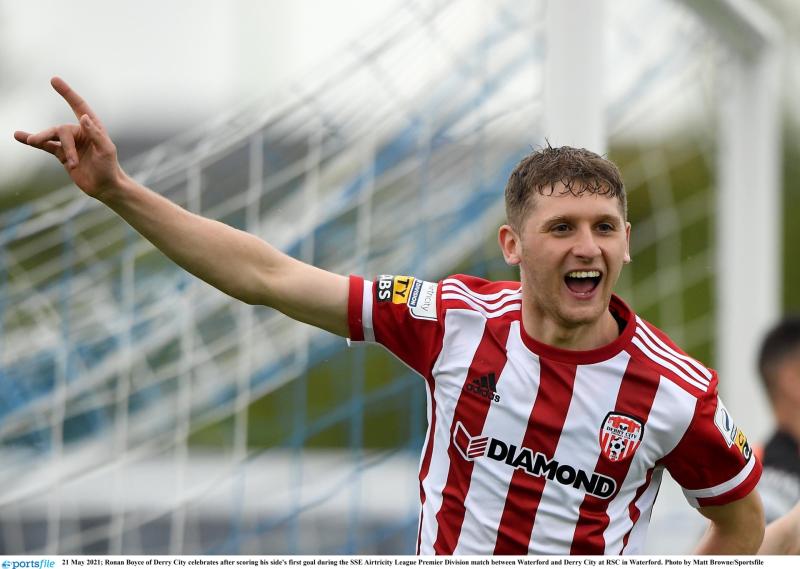 Derry City won at the Sligo Showgrounds for the second time this season.

Ronan Boyce struck an 86th minute winner against Sligo Rovers as Derry City made it four league wins in a row.

The full back was in the right place at the right time to volley in his sixth goal of the season to close the gap on Sligo in third place to just one point.

Derry City dictated the pace of the play early on and it was no surprise when they took the lead on 10 minutes.

The goal was yet another exceptional strike from Joe Thomson. Junior Ogedi-Uzokwe, back after two weeks out, won a free kick 25 yards from goal, and Danny Lafferty stood over it before teeing up Thomson who absolutely drilled it past Ed McGinty, the ball flying into the net to make it 1-0.

The Sligo equaliser arrived just before the break. Lewis Banks was involved as he won the ball in his own half and continued his run, with the ball being played out to Mark Byrne on the right. Derry couldn't stop the cross from coming in and after Banks missed his effort, it came to Kenny who bundled the ball home from close range to make it 1-1.

There was little between the sides in the second half, and the decisive moment came just our minutes from time when substitute Will Fitzgerald’s cross was not dealt with and Boyce latched onto the loose ball to volley past Ed McGinty and into the net to win the game for Derry City.