"It’s about working hard, being proud of where you come from and achieving your dreams.” 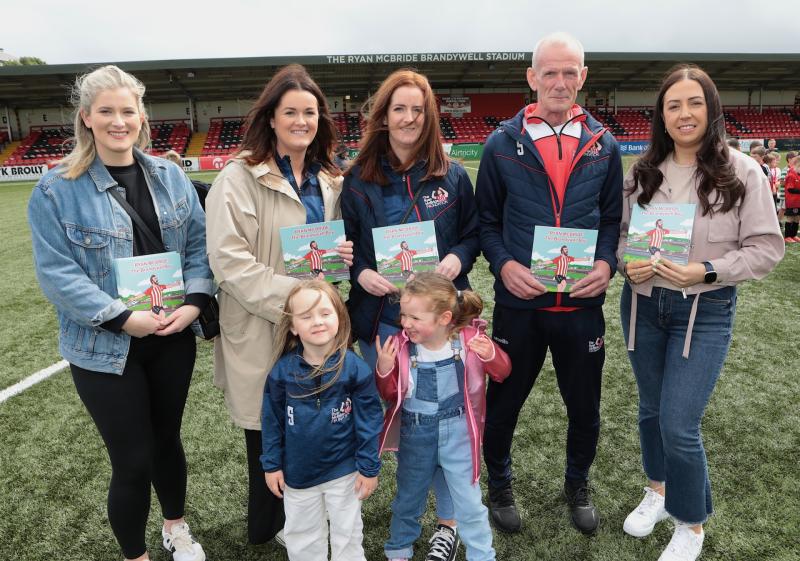 The new Ryan McBride book was launched at the weekend. Pic by Tom Heaney, nwpresspics

“What better role model could you have than someone from these streets, who lived beside the Brandywell Stadium, who always dreamed of playing for Derry City and actually achieved that?”

Friday past was a special day at the Brandywell as the end of the Ryan McBride Foundation Summer Camp coincided with the launch of ‘The Brandywell Boy’, a special illustrated book created in honour of the former Derry City captain.

Illustrated by local artist Anthony Cooley, the project, an idea of the Gasyard Feile Committee and the Bogside and Brandywell Health Forum, was made possible by a generous financial donation by City Chairman Philip O’Doherty.

Derry City boss Ruaidhri Higgins and a number of first team players were in attendance for the launch as Ryan’s legacy continues to live on, and now in the form of a children’s’ book.

Gareth Stewart of the Gasyard Feile explained the origins of the book.

“Since Ryan’s passing we have done the day for Ryan McBride every year to remember his impact on the local community,” he began. “This year we were thinking what we could do and I’ve been reading children’s books to my own family around inspirational characters, and I mentioned to Aisling Hutton (BBHF), who is his cousin, about possibly doing a book for Ryan. She contacted the family to ask permission could we do it.

“Growing up you want role models and for the kids in the Brandywell, what better role model could you have than someone from these streets who lived beside the Brandywell Stadium, who always dreamed of playing for Derry City and actually achieved that? Not only did he achieve that, but he ended up captaining them and winning trophies for them. It’s about working hard, being proud of where you come from and achieving your dreams.”

Illustrator Anthony, who now lives in Belfast, admitted he was honoured to be asked to illustrate the book.

“Just to be asked to do something for someone so famous from our home town was a real privilege,” he said. “Everyone knows Ryan’s story; it’s such an inspirational story considering what he went through when he was growing up. He was always pushing himself to try and achieve what he wanted to do which was to become a football player for Derry City FC.

“He still has such a massive presence even though it has been four years now since his passing, but he lives on through the legacy of the foundation and what they do every year to remember him. He was such a huge character in life and death as well and hopefully this book inspires young kids who live here and beyond, so if they read the story about his life and what he achieved, it is there to inspire, and he still lives of the hearts of those who knew him and, in the book, hopefully.”