'The euphoria and the passion elevated the players to a level where they could score the goals. It was incredible.' 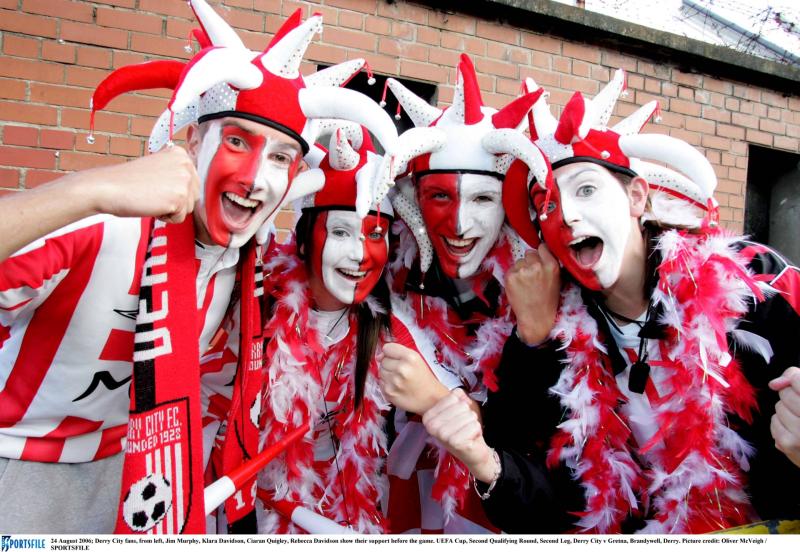 Derry City fans were in dreamland against Gretna

Despite beating IFK Gothenburg TWICE, the Candystripes were seen as underdogs going into the tie against the Scottish side who were being bankrolled at the time by millionaire Brooks Mileson. And when Ryan McGuffie scored to give the hosts the lead after just eight minutes, it seemed that a difficult night was in store for Stephen Kenny's side.

Not even the most optimistic of City fans could have predicted what was to come...

A header from Darren Kelly saw the sides go in level at the break, but the second half was complete destruction as City swept their opponents aside with football and goals of the highest quality. Kevin Deery and Ciaran Martyn both scored twice to floor the Gretna players and send City fans into a delirium which they would never, ever forget.

“Derry supporters were incredible that day at Fir Park,” Kenny remembers. “Gretna were very experienced with seasoned Scottish pros. The money was good, they were full time, and they had come up through the divisions, without much of a fan base, which was unusual. Their manager Rowan Alexander was over-confident and they had really dismissed us before the game. Their stock was high and their confidence was high.

“We scored an important goal just before half time with a tremendous finish. We changed things tactically at half time. We started 4-4-2 with Kevin Deery on the right. We changed it so Kevin McHugh would go wide in the second half and the game opened up. We felt Gretna were very open but we felt that they would struggle to handle the running dynamic of both Ciaran Martyn and Kevin Deery from midfield and that proved to be the case. You couldn’t have predicted that both Kevin and Ciaran would get two amazing goals each but it definitely caught them by surprise.

“The goals were just incredible and the euphoria and the passion elevated the players to a level where they could score the goals. It was incredible. We knew we were through. It was quite amazing.”