Over 1,000 expected for Drogheda encounter 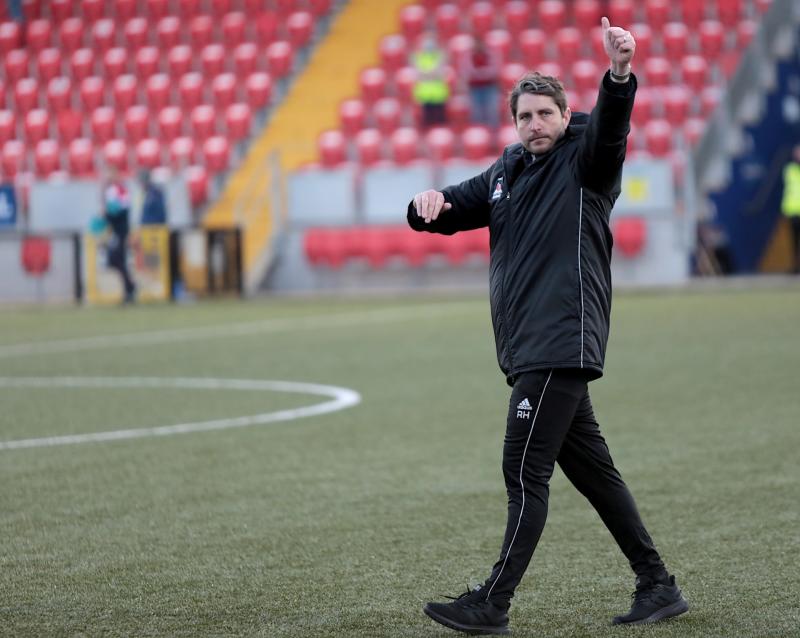 Ruaidhri Higgins has welcomed news that there will be over 1,000 fans at tonight’s game against Drogheda United, insisting it will give his players a ‘huge lift’.

It is understood that after a meeting of the Safety Advisory Group, the attendance at the Brandywell has been increased from 478 to 1150, allowing the biggest number of supporters yet since first returning back in June.

“I’m sure the players will get a huge lift and hopefully the fans can get in early on and make loads of noise and help push us towards three points. Everyone is in agreement that it’s not really football when supporters aren’t there; it’s unrealistic and it doesn’t make sense. To finally start seeing more numbers coming in the gate, we’re getting closer to what we know and that’s great for everybody. The sooner we can get the Brandywell full and rocking, the better for everyone involved.

The Candystripes go into tonight's game on the back of two wins on the road, against Drogheda in the FAI Cup and Longford in the league. While playing the same opponent twice in three weeks is not ideal from Higgins, he is hoping that his team can beat Tim Clancy’s side for the third time in just three months.

“You would rather it be more spread out but that’s the way it is,” he continued. “I remember years ago, I think we played away to Cork three times in a few weeks in a few different competitions so that’s just the way it goes. You just have to adapt and it’s the same for the both teams really.

“It was a great win for us in the cup and then a good away win down in Longford. It wasn’t exceptional in terms of being overly eye-catching, but our two goals were very impressive and it was a good, professional job. We got the job done and that will give us confidence going into this week.”

Ronan Boyce suffered a dead leg against Longford and faces a late fitness test, while Ciaron Harkin returns after serving a one-game suspension.

The FAI Cup side two weeks ago was memorable due to two red cards and a penalty shoot-out, and Higgins has no doubt that there will be little between the sides again.

“When I watched the game back, eleven vs. eleven, we were in control and we had a lot of the ball,” he reflected. “Our performance was good, but they go on to have two men sent off and they had something to hang onto and they dug in. In both meetings against Drogheda that I have been involved in, both at Drogheda, there have been very little in the games and I expect this Friday to be the same.”

On the increased attendance, the statement from Derry City Council said:

“Derry City and Strabane District Council has confirmed that it has been working very closely with Derry City FC with regard to the facilitation of spectators to attend matches at the Ryan McBride Brandywell Stadium over the past number of weeks and are delighted that the facility has reopened to spectators for a number of matches to date.

“The Council and the club have continued to meet regularly to review the Government restrictions and to update the risk assessments and health and safety requirements necessary to allow for a significant increased number of spectators to attend this weekend’s fixture.

The Council spokesperson added “the Brandywell facility has been fully adapted to comply with social distancing and signage has been erected throughout. The health and safety of Council and Club staff and the wider public has been foremost in the decision making process at all times when dealing with this situation.”