'An All-Ireland is a once in a lifetime opportunity' 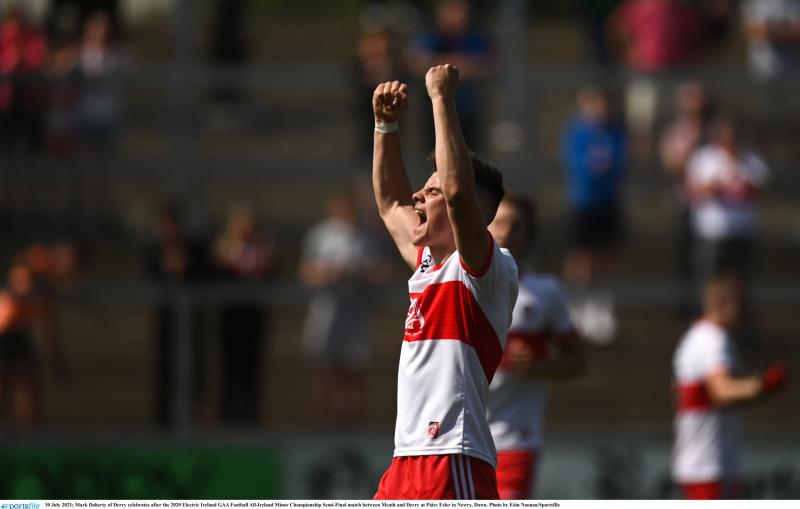 Mark Doherty and his team mates don't want to let go.
Winning Ulster is an achievement in itself, but this group of players now has the bit between their teeth and they want to go all the way. It may not be Croke Park, but it is an All-Ireland final and last week Meath were not going to stand in the way of a 'special' group of players fulfilling their destiny.
"We've been together since we were under-15s," he said. "Everyone here has a great bond. We sat down together last Thursday night and said "This can't be the end. This can't be the last night we're up here together", and we proved that This is a group of lads that want to go all the way and from day dot that's what we've been trying to do."
Doherty was still coming to terms with the fact that Derry had made it, even as the celebrations went on around him after last weekend's victory. Getting to an All-Ireland final is now an everyday occurance, and he knows it.
"It's really indescribable to be honest," he admitted. "We talked about it 18 months ago about how our first step was in Ulster, but we thought from the very start that we could go all the way. Meath were the big favourites from the start; they were the team to beat and they gave us a hell of a game. We knew it wasn't going to be easy, but we knew that if we could bring it we would have the men for it and we definitely went for it. We were put to the boil in our last two games against Monaghan and Tyrone and we really showed our character and this was no different."
There was never a relaxing moment in the game against Meath, with Derry challenged again and again by an opponent who wanted it just as badly.
"(After the penalty) to be honest at the start you're worried and anxious about what's going to happen, but Marty has us well trained," he continued. "He is always on to us and we can cope with that pressure. We have been there in games against Tyrone and against Monaghan. We just had to calm down and reassure ourselves and we went up there and got a free kick and put it over the bar and that gave us a boost and we scored three on the trot there after that.
"We got the lead and thought we could settle down a bit but Meath kept coming at us. We never really reassured ourselves that it was over, we just had to keep doing what we were doing the whole way to the end. We didn't get the feeling that we were in an All-Ireland final until the end."
All eyes are now on Tullamore this Sunday at 1pm. That's what all this has been for. That's what it all comes down to in the end.
"The All-Ireland is something special," Doherty acknowledges. "It's a once in a lifetime opportunity to play in front of a crowd for an All-Ireland. We don't talk about that often. It's been a few years since Derry were up there but it's just one more step and we'll be happy when we lift the cup."