Sensational second half from champions 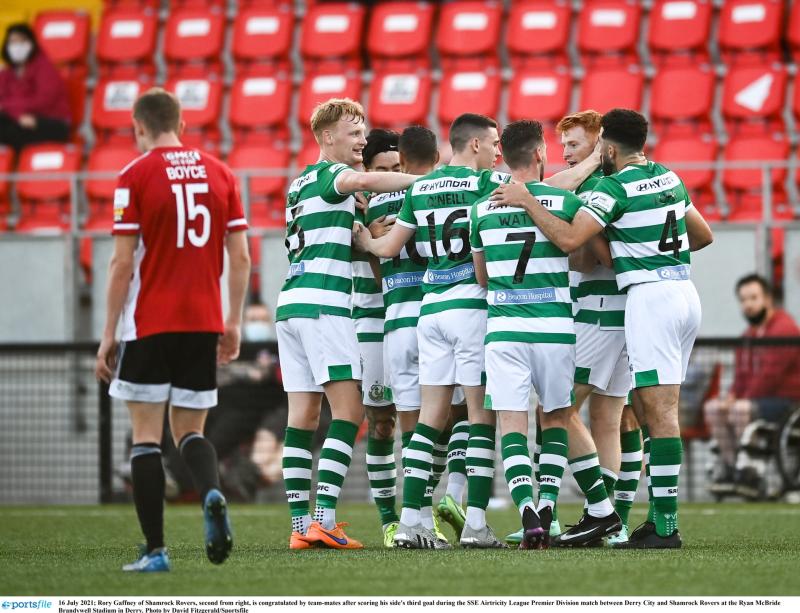 Shamrock Rovers hit back in style at the Brandywell.

It just wasn't to be for Derry City as Shamrock Rovers came from 2-0 down to secure a fantastic win at the Brandywell.

Stephen Bradley’s side, forced into late changes due to a Covid incident in the squad, were second best for the first half hour of an entertaining game, and looked in real trouble, but they showed just why they are champions with a superior second half performance in which they found the net three times.

City stunned Rovers by taking the lead on 20 minutes. Junior Ogedi-Uzokwe did brilliantly to charge down Roberto Lopes’ attempted clearance, before finding Will Fitzgerald whose low cross found Ronan Boyce to fire in his fifth goal of the season.

It was 2-0 just ten minutes later as referee Rob Hennessey pointed to the penalty spot and cautioned Roberto Lopes for holding Junior as he defended a corner. The City striker stepped up to take the spot kick and lashed it past Mannus.

The comeback began just five minutes before the break when Ronan Finn’s cross was headed out by Jack Malone, but only to Graham Burke who lashed the ball into the net.

Rovers applied firm pressure in the early stages of the second half and they got their equaliser just 10 minutes in after a superb move.

Aaron Greene played Liam Scales in behind Ronan Boyce and his low cross was perfect for Finn who side-footed past Gartside from close range to make it 2-2.

Rovers then completed their comeback just past the hour mark and it was pure class from the visitors. Graham Burke lofted a ball in behind the Derry defence to put Gaffney through on the left, and the striker produced a fantastic finish as he lashed the ball into the roof of the net past Gartside to make it 3-2.

The game was over as a contest on 74 minutes when Richie Towel ran completely clear of the Derry defence and he simply slotted the ball past an exposed Gartside to seal a superb second half from the champions.

Rovers remained on top in the closing stages and Burke almost added another, with Gartside scrambling to keep out his clever free kick. It was impressive stuff from the champions.