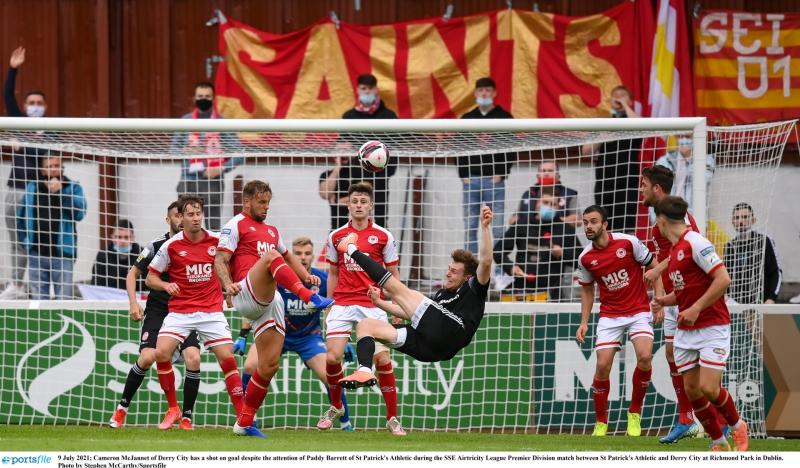 Derry City were unable to break through against 10-man St. Patrick’s Athletic as they fell to a disappointing defeat in Dublin.

Ruaidhri Higgins’ team played over 30 minutes with an extra man after the second half dismissal of Jamie Lennon, but despite constant pressure, they couldn’t get the goal they needed. City captain Eoin Toal hit the bar with a header but they were unable to test the Pat’s goalkeeper as the hosts held firm to go joint top of the Premier Division.

City probably should have been celebrating a goal just seven minutes into Friday’s contest when Junior Ogedi-Uzokwe raced onto a poor pass before driving into the area. The striker skillfully got away from Pat’s defender Paddy Barrett but he shot straight at goalkeeper Vitezslav Jaros and the chance was gone.

It was St. Pat’s who broke the deadlock midway through the half however as Cameron McJannett gave the ball away in midfield and Pat’s counter-attacked, Burns’ cross eventually falling to Chris Forrester who feigned to shoot on his left foot, before turning on his right and rifling the ball into the roof of the net to make it 1-0.

Pat’s had Derry on the ropes at this stage and it needed a last gasp tackle from Eoin Toal to deny the hosts a second goal, the City captain saving his side as he blocked substitute’s Billy King’s shot.

The storm eventually passed for City who could well have equalised before half time. Jack Malone floated a free kick into the area and Eoin Toal headed it across goal in the direction of Danny Lafferty who just needed a touch to send it in, but the ball somehow evaded the Derry man and Pat’s survived.

The game took a dramatic turn on 58 minutes when Jamie Lennon fouled James Akintunde and received a second yellow card from referee Neil Doyle, leaving the home side down to ten men with over 30 minutes still to play.

City were immediately on the offensive and they came within the breath of the crossbar from equalizing, Eoin Toal’s powerful header beating Jaros but not the upright, before substitute Evan McLaughlin had his goal-bound shot blocked.

It was almost incessant pressure from City after tat but they couldn’t find a way through as Pat’s held on for an important three points.