“I didn’t know too much about James before I came in, but since then he has been brilliant" 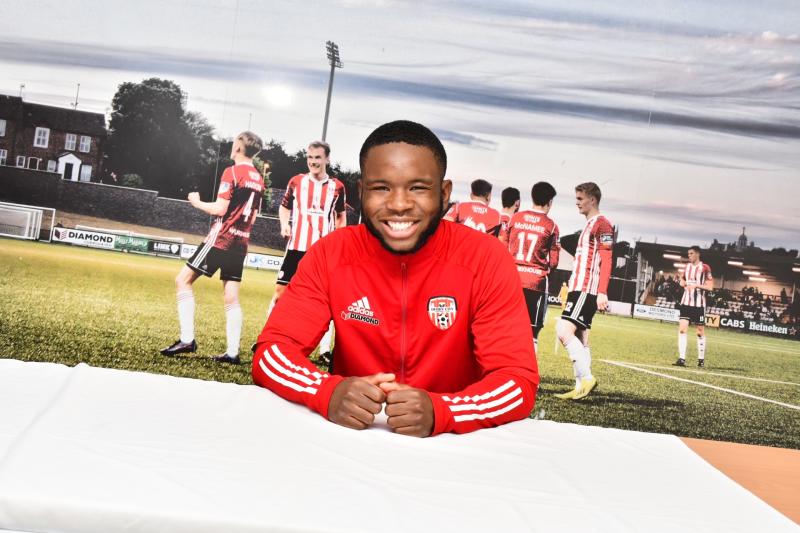 Ruaidhri Higgins admits he was eager to tie James Akintunde to the club for the long term very quickly, having been impressed with the forward from his first day as Derry City manager.

Akintunde has extended his contract with the club until the end of the 2022 season, completing a busy week for Higgins off the pitch.

The manager is a big fan of Akintunde, who arrived at Derry last summer, and has since gone on to make 31 appearances, scoring 6 goals.

“I didn’t know too much about James before I came in, but since then he has been brilliant,” he said. “I’ve used him in different positions and he’s been equally as effective. James tells me every day that he wants to score more goals but I think that as we evolve and improve as a team then he will score more goals. He’s a vital player for us and he has been instrumental in the points we have accumulated in the last couple of months.

“It was important for me that James was aware quite early on in my spell here that he was someone I wanted to keep at the club. He has impressed me in every single way. Off the pitch he is an absolutely brilliant person as well, he always has a smile on his face and the staff and the players love having him around. You obviously need really good players which he is, but you also need really good people around the place and he ticks all the boxes for me.”

The player himself is loving his time at Derry City, enjoying regular football after a few injury-hit years in England.

“Ruaidhri has come in and he has managed me quite well,” he explained. “I’m just happy to get as many games as I can because usually it’s a bit back and forth, but right now I’m getting a good run of games so I’m definitely getting sharper. I’m playing the most minutes I have done for a while. In the last few years I wouldn’t get through 90 minutes, but as you see this year, I’ve got through quite a few.

“It was very difficult when a new manager comes in because you have to start all over again, but Ruaidhri gave me the opportunity and he has got trust and faith in me and that helps my confidence in playing.”