Derry City's unbeaten run comes to an end at Dundalk 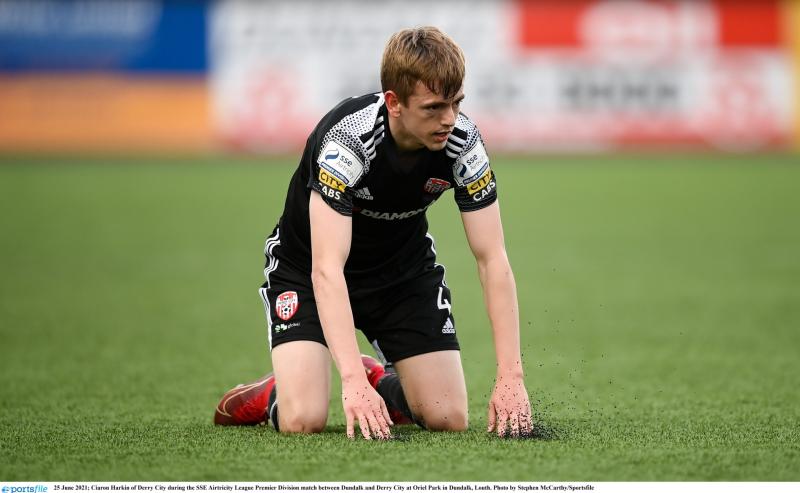 Ciaron Harkin looks to the ground as Derry City fall to defeat in Dundalk.

Derry City's brave fightback from 2-0 down fell just short at Dundalk as they fell to a first defeat in nine games.

Despite Eoin Toal's first goal of the season, City had ultimately too much to do as they were second best for the first 50 minutes, going 2-0 down before they made a game of it.

Most of the opening half hour was spent in the City half however and Nathan Gartside had to make a number of saves, his best of the lot coming as he somehow got a hand to Pat Hoban’s header, which seemed destined for the top corner after Michael Duffy’s pinpoint cross.

The opening goal finally arrived just three minutes later and this time luck was against Gartside, as he parried Michael Duffy’s fierce shot into the path of Daniel Kelly who couldn’t miss as he tapped into the empty net from close range.

It got worse for Derry early in the second half as the visitors couldn’t clear a corner and when the ball bounced up onto Darren Cole’s hand, referee Rob Harvey pointed to the penalty spot. There was no changing the referee’s mind despite Derry’s protests and Pat Hoban found the bottom corner to make it 2-0.

That immediately woke Derry up, and they should have pulled one back when Akintunde broke into the are and brought a save from Abibi. The rebound fell to Thomson, but his shot was deflected over the bar by Stanton with Higgins screaming for handball on the sidelines.

The City boss was in better mood within seconds however, as Eoin Toal was found unmarked from the corner and the captain powered in a header to bring his team back into the game.

It then could have been 2-2 as this game exploded into life, Thomson found unmarked on the edge of the area but on his weaker left foot he shot poorly over.

Higgins then withdrew Ciaron Harkin in place of Patrick Ferry as City chased the equaliser. The young striker almost got it as he superbly set himself up for a volley which flew into the side netting.

The Candystripes threw everything at a tiring Dundalk in the closing stages and it was Ferry who almost grabbed a last-gasp equaliser as he got on the end of a flick from Akintunde but could not get it past Abibi.