Five wins in six away games for Candystripes 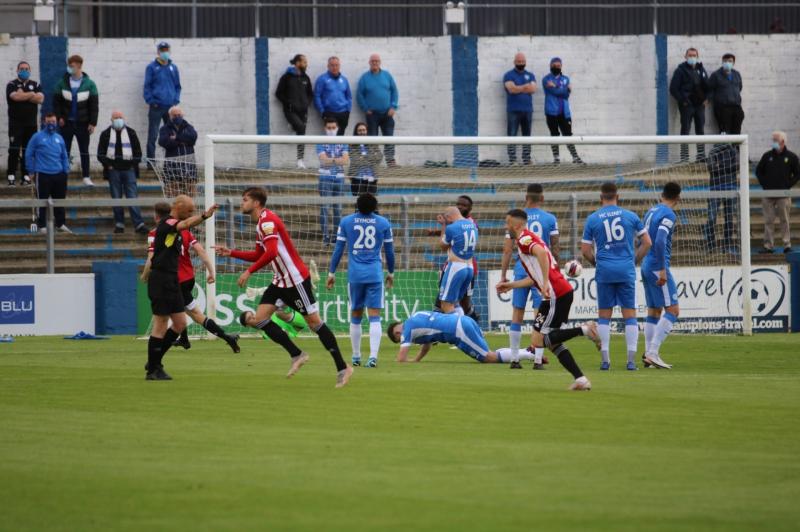 Will Patching curls in the winning free kick at Finn Park.

Will Patching was the Derry City hero again as his double earned a derby win against Finn Harps.

The midfielder, who could return to Dundalk when his loan deal expires in a few weeks, was the City hero as his two first half strikes – a penalty and a free kick – was enough for City to gain revenge on Harps, who won at the Brandywell last month.

The first half was end to end.

Derry City were awarded a penalty just eight minutes in with their first attack. Ronan Boyce received the ball on the right and sent a deep cross in towards David Parkhouse, who was challenged from behind by Ethan Boyle as he rose to head it. Referee Neil Doyle agreed that the City player had been fouled and pointed to the spot to the dismay of the Harps contingent, and in particular manager Ollie Horgan.

Amidst a chorus of boos from the Harps crowd, Will patching stepped up and stroked the ball past Mark McGinley and into the corner to make it 1-0.

That lead last only 8 minutes however as Finn Harps levelled. Barry McNamee’s corner went all the way to the back post where Shane McEleney headed the ball back across goal. It was flicked on by Kosovar Sadiki and Boyle was on hand to head it past Gartside from close range to make it 1-1.

An unforgettable first half ended spectacularly as City restored the lead and it was another incredible effort from Will Patching. The midfielder won a free kick 20 yards from goal before sending a beautiful curling effort over the wall and into the top corner past McGinley. It was goal number six for Patching and arguably his most spectacular and important.

Harps started on the front foot in the second half and came within inches of equalising when the ball fell for Foley in the area, and the man who scored the winner at the Brandywell last month, turned and shot with his effort deflecting off Ronan Boyce before it bobbled agonizingly wide of the post with Gartside beaten.

There was little separating the sides and Harps again upped their intensity as the game entered its final stages. Shane McEleney really should have levelled when Gartside completely missed McNamee’s corner on 69 minutes but the former City defender sent the ball across an open goal and wide of the post.

That proved to be Harps’ final chance as Derry City hung on brilliantly for their fifth away win in six games.