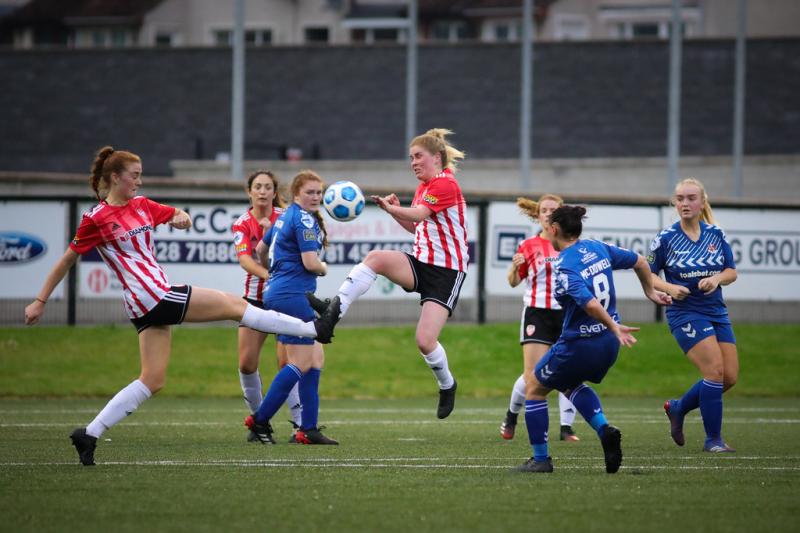 Derry struggled in the opening twenty minutes, as Crusaders had numerous half chances. Rea, Nelson and Wilson all had attempts on goal, but the finishing lacked the conviction that almost defined Crusaders evening.

On 29 minutes, Crusader appeals for a penalty were swiftly denied, as Wilson dropped in the Derry penalty box. The half ended a more even contest, with Paula McCrory showing some promise for Derry in attack.

The second half started in a similar vein to the first. Wilson headed narrowly wide on 46 minutes and only a fingertip save by Claire Friel in the Derry Goal on 62 minutes denied Danielle McDowell the headline.

As Crusaders pressed high in search of that goal, Derry were wise to their own counterattack potential. With a little more timing and finesse, Derry could easily have troubled Harvey-Clifford in the Strikers goal on numerous occasions.

With ten minutes to go, Derry legs were wilting but determined. The Candystripes looked as if they would hold on for a well-earned point, as Crusaders first hit the bar and then blasted over the rebound in injury time.

With a minute remaining of the 96 however, Emily Wilson unleashed a long-range effort, that finally broke the Derry resolve. For Kevin Mclaughlin, it is no doubt a point dropped, but also a mindset of belief, most positively gained.