Four wins from last five away games for Ruaidhri Higgins 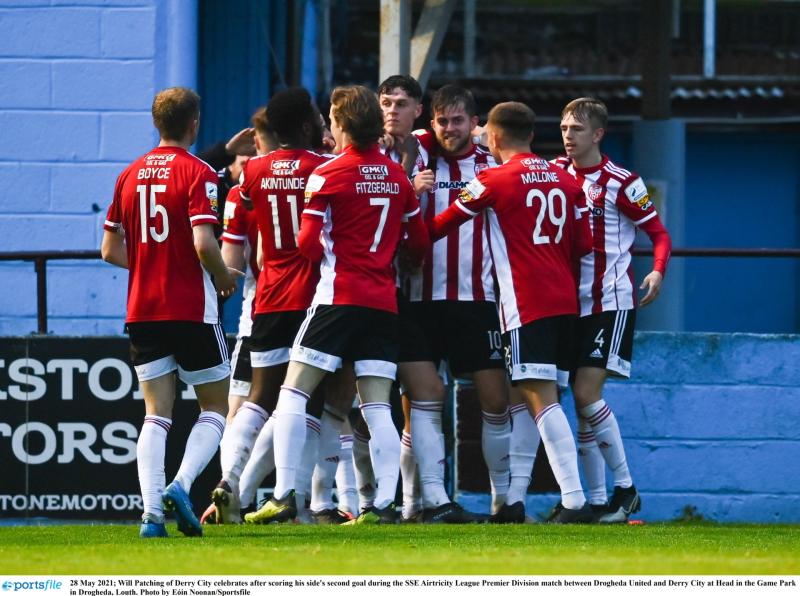 Two goals from Will Patching earned Derry City a brilliant win away at Drogheda United.

The midfielder, who could possibly have played his last game for the club, scored two superb free kicks, one in each half, to earn City a fourth win in their last five away games under Ruaidhri Higgins.

Both teams ended the game with 10 men with Darren Cole and Jordan Adeyemo red carded for separate incidents in the closing stages, as Derry hung on for a brilliant win.

The opening goal came just 10 minutes in when Patching caught everyone out, especially goalkeeper Odumosu, and his free kick from 35 yards went directly into the net to give Derry City the lead.

Drogheda were then awarded a penalty just past the hour mark when Dane Massey’s cross was controlled by McJannett, but illegally according to the official, who immediately pointed to the spot, cautioning the Derry defender for handball. Mark Doyle stepped up and sent the spot kick down the middle past Gartside to level the game at 1-1 on 63 minutes.

Derry went back into the lead just over 10 minutes later however, and again it was a piece of Patching magic which did it.

Jack Malone won a free kick on the edge of the Drogheda area, and with the penalty area crowded again waiting for a cross, Patching went for goal from 20 yards, and found the top corner beautifully to put his team back into the lead with just over 15 minutes to play.

Incredibly, Darren Cole’s evening lasted just 8 minutes as he was then sent off having received two yellow cards. The Scot could only look at referee Reale in disbelief as he was dismissed for just two tackles in the game.

Drogheda’s one-man advantage lasted all of two minutes however as another substitute, this time Jordan Adeyemo, received his second caution for going down in the area too easily leaving both teams with 10 men with just over five minutes remaining.

Derry hung on bravely, but they needed a brilliant save from Gartside to hold their lead deep into added time, as he pushed away a volley from Doyle to ensure three points on the road, again, for the Candystripes.