Derry City hoping for fourth away win in five games 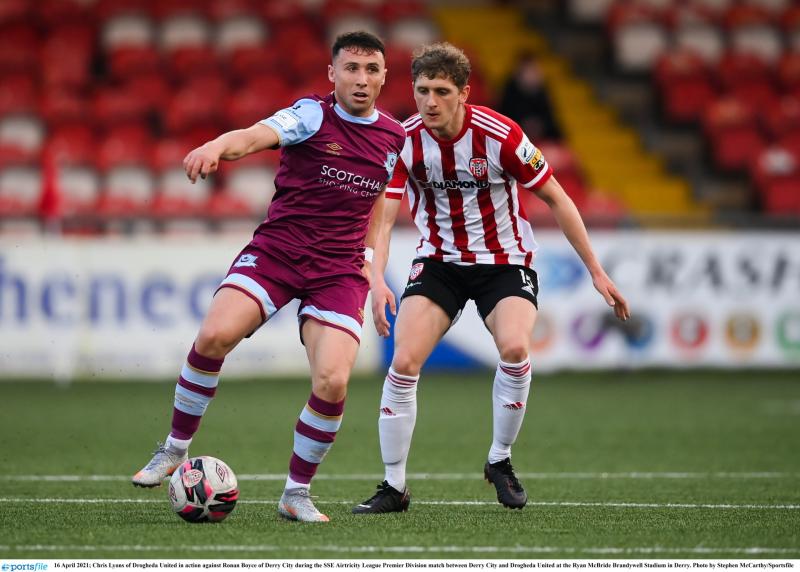 Derry City are hoping for a fourth away win in five games when they face high-flying Drogheda United tonight.

The Candystripes are the only team in the Premier Division without a home win so far, but since the arrival of new manager Ruaidhri Higgins, they have been superb on the road, winning at Sligo Rovers, Bohemians and Waterford and drawing with champions Shamrock Rovers.

That elusive home win was just minutes away against St. Patrick’s Athletic on Monday evening, only for a late equaliser to deny the hosts the three points. It was not from lack of effort however against one of the Premier Division’s most improved teams.

“We had to dig in,” midfielder Ciaron Harkin said.

“It was a scrap all over the pitch and it was hard at times to get the ball down and get it moving as both teams got in each other’s faces trying to cancel each other out. I thought we dug in well and we had the chance to win it, but we conceded a goal at the end.

“We don’t really look at that home record. Be it home games or away games, you get the same points. It’s about working on our performances and trying to get as many points on the board and as many wins as possible. It wasn’t our day (against St. Pat’s), we thought it was when Joe put us into the lead, but we’ll just have to keep digging in and go to Friday and push even harder for another win.”

Those three away wins have made City one of the most consistent teams in the division away from home. Bohemians’ 5-1 win over Dundalk on Monday night shows just how difficult away games can be, making that recent away record all the more impressive according to Harkin.

“It’s about consistency. You see Dundalk go and get a good win against Rovers, the league leaders. But then they get beaten by Bohs this week, so anything can happen and it’s about making sure you’re on the right end of it and you can push up that table, which is the main thing.”

Midfielder Marc Walsh is the only injury doubt for Higgins as City chase the win which could see them leapfrog Dundalk into seventh.