'An experience I don't want to encounter ever again'

Coyle promises not to box in Mexico again after bizarre win 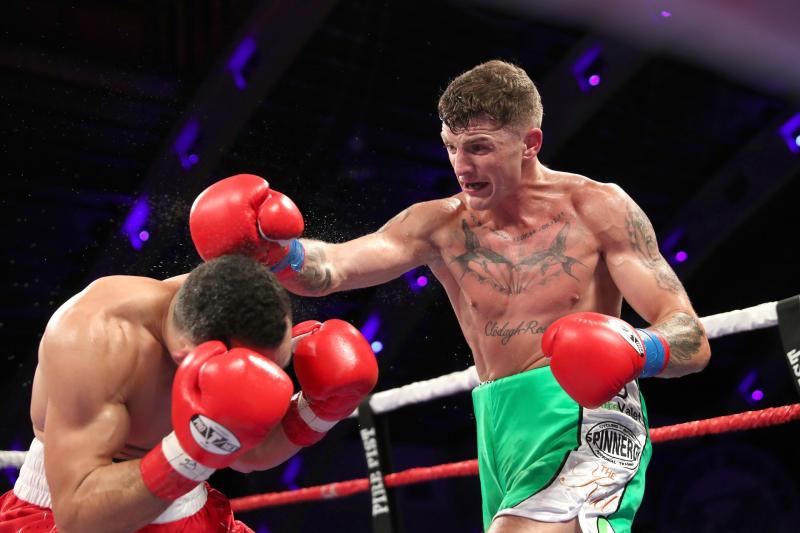 Connor Coyle is setting his sights on a return to America this year.

Connor Coyle has promised never to fight in Mexico again after overcoming the most bizarre circumstances of his professional career to go 14-0 at the weekend.

Coyle’s paradise location in Cancun turned into a nightmare as he found himself fighting, not in an air-conditioned stadium, but ‘literally a street in Mexico’, as rain poured down from overhead, eventually stopping his bout with Edgar Ortega after six rounds.

The Derry middleweight was ahead on the scorecards at the end of the sixth round when the fight had to be stopped due to persistent rain and he was awarded the victory and the ABF Continental Americas Middleweight title.

The contest took place in the courtyard of a Cancun hotel, but after days of glorious sunshine leading up to the fight, the heavens opened.

It rained from the first round on and despite efforts to mop the canvas at the end of the fifth and sixth rounds, the decision was made to end the contest.

Despite the victory, Coyle felt no satisfaction at the way the event panned out.

“It was a bad experience,” he said. “Our plan was to get the rounds under the belt and take him into the later rounds so I was pacing myself and planning to pick it up in rounds seven, eight and nine.

“The rain didn’t help and it just kept getting heavier and heavier. They had to stop it after round five to mop the ring and brush all the water off the ring, but in round six it just kept getting heavier and heavier so they had to call the fight and go to the scorecards. It was an experience I didn’t ever want to encounter again in my professional career.”

Coyle knew early on that he had a problem as the rain did not let up, and he had to change his gameplan entirely mid-fight.

Opponent Ortega has taken the likes of Carlos Molina the distance, so Coyle was looking forward to the challenge, but his hopes of knocking out a durable opponent never came to fruition because of the farcical surroundings.

“I was pacing myself because I knew he was fit and I was fighting outside in the Mexican heat which he was used to, and he knew he could go ten rounds in the heat,” he continued. “I thought I was going to be fighting inside in an air-conditioned building but we pulled up to a bloody courtyard with just walls. It was literally in a street in Mexico; it was bloody terrible. I wanted to pace myself work off the jab and see what he brought in the later rounds, but the rain interrupted.”

‘Fight him at his own game’

Coyle was getting on top of his opponent despite the rain, proving that he can mix it up when necessary. He felt he was free and clear when it went to the score cards, but nothing was ever certain on a night like this.

“My punches were a lot harder and my punches were clean,” he reflected. “They were a lot cleaner than his. Because I couldn’t move so well in the ring I had to fight him at his own game. I had to block his shots, but not a lot were getting through; a lot of them were on the back of the head and the ear, but that’s just his experience and craft as a seasoned professional. My shots were a lot cleaner and they were scoring punches, so when it went to the score cards I got the victory.”

The Mexican experience is now behind him and there it will stay, the frustration only making him more determined to get back into the United States as soon as possible.

“I’m not happy with the way everything went,” he admitted. “Both my experiences in Mexico have been terrible. The only good thing is that I got two fights and I have two wins. I’m going to go home and regroup and talk to my coaches and see what is next.

“We’ve been speaking with the NEBF so they are going to get me onto the rankings for the end of the month so hopefully I will be fighting for the NEBF title when I get back to America. I don’t know if

“I’m going to fight again now until I get back into America. I’m happy enough with those two fights just to get the ball rolling again and to build the record more. I’ll never be back in Mexico fighting again, that’s for sure. I took a chance both times coming to Mexico, especially going to the score cards against a home town opponent but I did enough to win.”