Derry City denied in thrilling game at the Brandywell 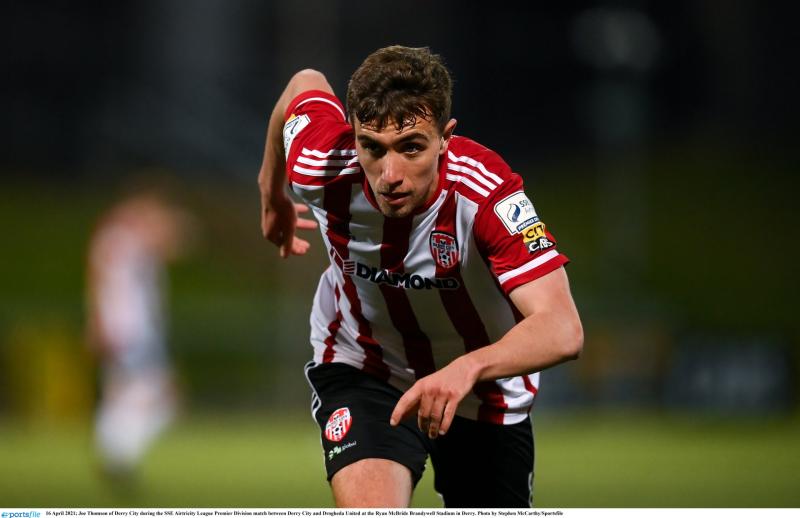 Joe Thomson gave Derry City the lead with his third goal for the club.

Derry City were denied their first home win of the season with a late equaliser in an entertaining contest at the Brandywell.

The Candystripes thought they had won the game when Joe Thomson volleyed them into the lead, but it wasn’t to be as the Dubliners hit back with a goal from Billy King just seven minutes from time.

Pat’s took the lead after 22 minutes when Benson’s corner tempted Nathan Gartside from his line, but the goalkeeper could only punch the ball upwards and when it came down Lee Desmond headed the ball over the goalkeeper and into the net.

Derry City responded quickly to that setback however and equalised within four minutes. Eoin Toal was unlucky to see his header cleared off the line by Chris Forrester, but the City captain was involved again moments later as he met Patching’s corner, and with the ball squirming about in the area, Ronan Boyce somehow forced the ball over the line.

The goal the second half threatened finally arrived on 68 minutes and it was a sensational effort from Joe Thomson. Will Patching delivered a free kick into the area and it was headed clear to the 18-yard line, but only as far as the Scot who drilled it powerfully past Jaros and into the net to make it 2-1.

Derry could not hold on however and Pat’s equalised in style on 83 minutes when substitute Ben McCormack’s pinpoint cross was met by Billy King who powered a header past Gartside from close range to level the game at 2-2 and ensure a point apiece for both teams.