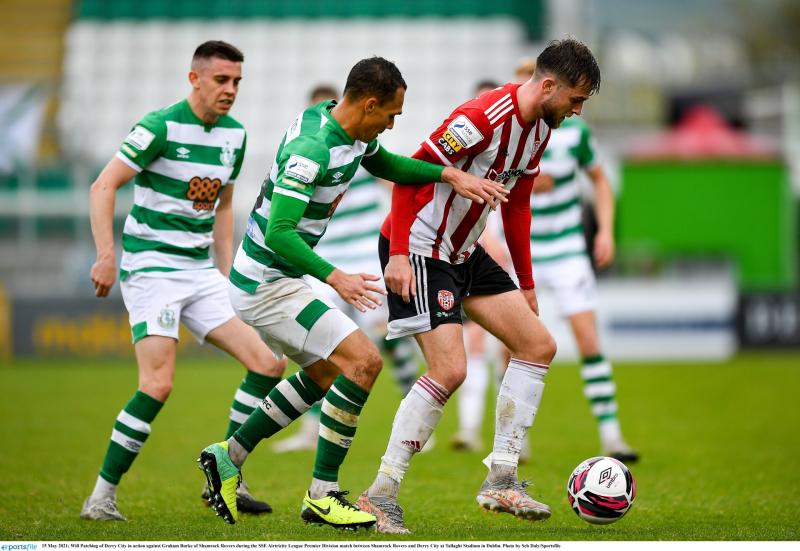 Will Patching in action against Shamrock Rovers.

Derry City dug in to pick up a well-deserved point at the home of champions Shamrock Rovers.

Ruaidhri Higgins’ team matched the champions every step of the way and the new manager has now taken seven points from his three away games.

It took Rovers just over 30 minutes to really trouble Nathan Gartside and unsurprisingly it was Graham Burke at the heart of it, as he made a direct run at goal, playing a one-two with Rory Gaffney before breaking into the area, but his shot was pushed behind for a corner by the City goalkeeper.

Rovers were beginning to build momentum as half time approached, but they were very nearly caught out when James Akintunde dispossessed Ronan Finn on halfway, and picked out the run of Parkhouse, who turned inside and shot over the bar from 20 yards.

Derry City needed Gartside to keep the scores level however, as the home side finally carved open their defence on 41 minutes, Sean Gannon’s low cross picking out Gaffney, who turned onto his left foot but couldn’t beat the City goalkeeper from close range. It was a hugely important save from Gartside.

The game exploded into life early in the second half when Akintunde was brought down by Sean Hoare in the area, and referee Graham Kelly pointed to the penalty spot. It was a terrific opportunity for City to take the lead and it was one which Will Patching did not waste as he sent Alan Mannus the wrong way to make it 1-0.

That lead lasted barely six minutes however as Rovers levelled, and it was Rory Gaffney who got the goal, shrugging off Ciaran Coll before firing past Gartside from the angle to make it 1-1.

Both sides pushed for the winning goal in the closing stages and there was more drama, with both teams finishing the game with ten men, Sean Hoare red-carded for Rovers on 83 minutes, and Danny Lafferty receiving a second caution in the 90th minute.