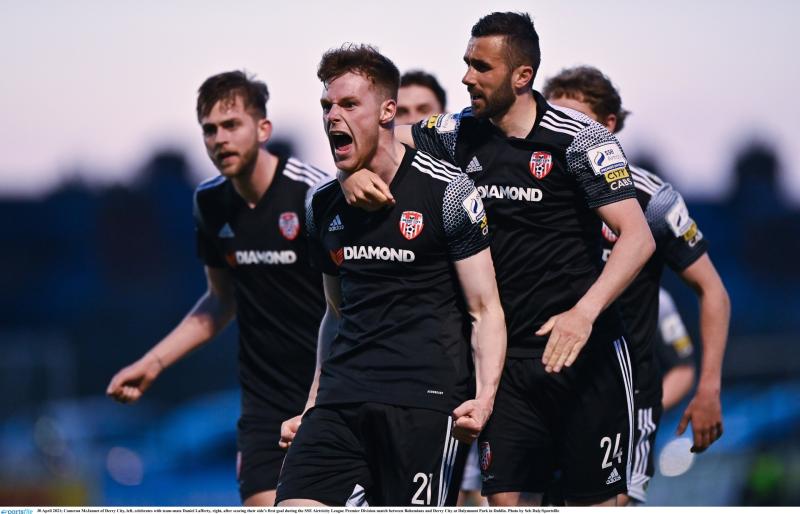 Cameron McJannett is surrounded by team mates after scoring.

McJannett has now scored four of Derry City’s six goals this season, as the Candystripes made it two wins from two under Ruaidhri Higgins.

The first goal arrived 17 minutes in, but it was avoidable from a Derry point of view as Ciaron Harkin was penalised for a high challenge on Tierney in the area and referee Ben Connolly pointed to the penalty spot. Former City striker Georgie Kelly stepped up to send the ball down the middle to give the home side the lead.

Derry finally made their presence felt in the game and with James Akintunde becoming more prominent, City steadily became more of a threat at the other end. It was Akintunde who very nearly equalised just past the half hour as he met Will Patching’s inswinging free kick with a bullet header which beat James Talbot but smacked off the Bohs crossbar.

It needed a brilliant save from Gartside to keep Derry in the game just five minutes after the restart as Bohs again started strongly. Liam Burt picked out Lyons again on the right and his cross fell to Keith Ward who prodded the ball goalwards from close range, but the City goalkeeper dived to his right to keep the ball out.

Ruaidhri Higgins made a double change on the hour with Marc Walsh and Joe Thomson coming on for David Parkhouse and Jack Malone.

It proved to be an inspired change from the manager as City looked more of a threat immediately. Akintunde, now playing as a central striker, raced away and played Walsh in on goal only for Talbot to save and Bohs to clear for a corner. From that set-play, Patching floated a ball into the area and Cameron McJannett was guided a header down, through a crowd and into the net to equalise for Derry City.

The game was there for the taking now and Derry City clearly had the belief that they could nick a winner, and Danny Lafferty got on the end of another Patching cross, but his close range heard was saved by Talbot.

It was Bohs who looked stronger in the final stages and substitute Dawson Devoy went all on his own against a backdrop of black shirts, but a shot somehow opened up and he could only send it straight at Gartside, who fumbled and the ball went behind for a corner which ultimately came to nothing.

But Derry stunned Bohs with a late goal and it was McJannett again, who got on the end of another Patching free kick, cushioning a shot past Talbot with just two minutes remaining to put his team into the lead.