'There's no reason why we can't go to Sligo and win' 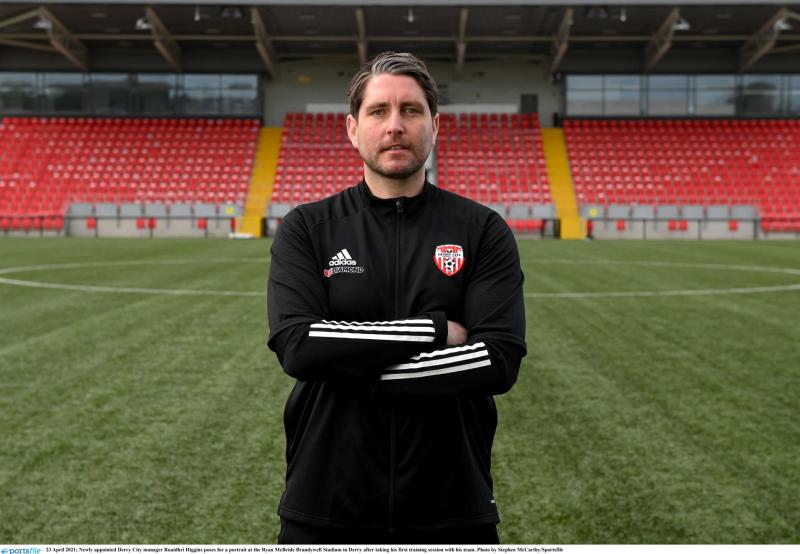 Ruaidhri Higgins insists that there is no reason why Derry City can’t pick up their first win of the season at Sligo Rovers today.

Higgins was appointed new Derry City manager yesterday on a three-and-a-half-year deal and will go straight into the dug out today alongside former Sligo forward Raffaele Cretaro, who he has appointed to his backroom staff.

Higgins spent over eight years as a player at Derry City and while this is his first senior managerial job, he has significant coaching experience, having worked with Stephen Kenny at Dundalk and the Republic of Ireland.

Higgins and Cretaro have their work cut out for them with the Candystripes bottom of the table with just two points from six games this season. The new manager has no doubts however that the team can turn their fortunes around.

"It will be a tough ask at Sligo, but what's the point if we don't believe we can go there and win? I feel once we win, we'll gain confidence and we'll climb the table, but it's just important that the players turn up with a smile on their face and go and enjoy their football and really enjoy their football and give it everything so we can come back up the road with a positive result."

"I'm not a fool there's going to be a lot of hard work,” he acknowledged. “I'm going to have to work hard on the training ground with both the staff and the players, but as I said I wouldn't have taken the responsibility and the job on if I didn't believe we could climb the table.

"The players have to be ambitious, for me there's a lot of talent in the group and it's just getting over that first hurdle of getting our first win, that will generate so much confidence and then I have no doubt that we can go from strength to strength.

"I want what any manager wants, you want talented players, who have real drive and people who are ambitious who want to do well in the game and not just settle for mediocrity.”