McJannett scores again as Derry City hit back against Dundalk 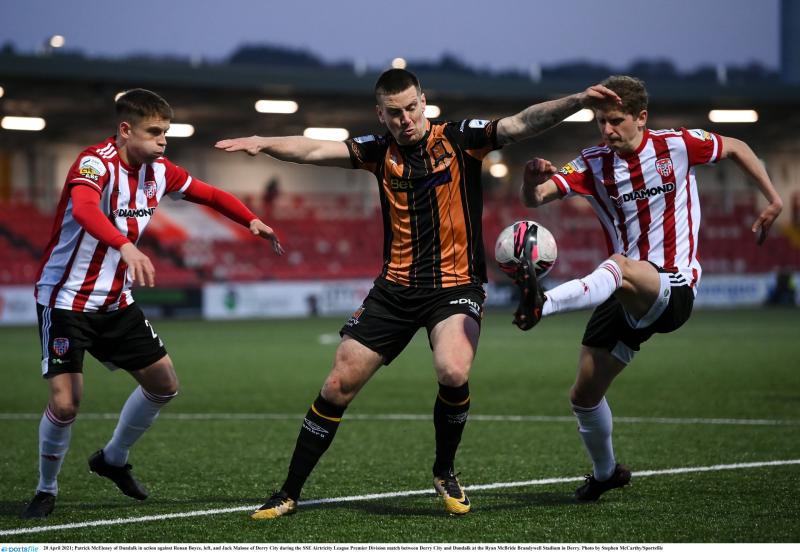 Derry City and Dundalk played out a 1-1 draw at the Brandywell.

Cameron McJannett made it two for the season as Derry City back to earn a draw against Dundalk.

Declan Devine’s team fought back well after falling behind to a goal from David McMillan early in the second half, and held on resolutely despite intense pressure from the visitors late on.

The visitors should really have taken the lead 15 minutes in when Michael Duffy’s cross found Patrick McEleney completely alone in the centre of the Derry goal. McEleney just had to pick his spot but sent his shot wide, holding his head in his hands as a result.

Midway through the first half, City opened Dundalk up with an intricate passage of play which involved Lafferty, Malone and Ciaran Coll, the latter’s cross eventually falling for Ronan Boyce on the edge of the area, but the youngster shot over.

Dundalk lost Pat Hoban to injury 10 minutes before the break, but they were not short of a quality replacement, as David McMillan came on, the striker scoring more goals at the Brandywell than anywhere else in his League of Ireland career.

The game needed a boost but unfortunately for Derry City it arrived in the form of a Dundalk goal within 10 minutes of the restart.

Patrick McEleney did well to send Michael Duffy clear down the left, and his pinpoint cross was perfect for McMillan who side-footed in from close range to make it 1-0.

It could well have been game over for Derry within 60 seconds as Dundalk carved the home defence open again, Sam Stanton racing clear on goal, but he was unable to beat Gartside who pushed his shot away to safety.

Dundalk’s advantage lasted a matter of minutes however as Derry City hit back to equalise. Jack Malone’s free kick was met by Ronan Boyce who headed it back across goal, causing a scramble before Cameron McJannett hooked in his second goal of the season.

The three points were there for the taking as the game entered its final quarter and Will Fitzgerald came so close when his 20-yard free kick just cleared the crossbar.

Dundalk had just as much belief as Derry had and they almost grabbed a second when the ball fell for McMillan in the box but he scuffed his volley wide without testing Gartside.

Dundalk threw everything they had at Derry City in the closing stages and they thought they had won it when the ball fell kindly for McMillan in the area, but he was denied by a sensational save by Gartside.

There was nothing the goalkeeper could do moments later however as Cameron Dummigan almost won it with an incredible strike from 20 yards, the full back drilling the ball through a crowd onto the crossbar, and somehow Derry survived.